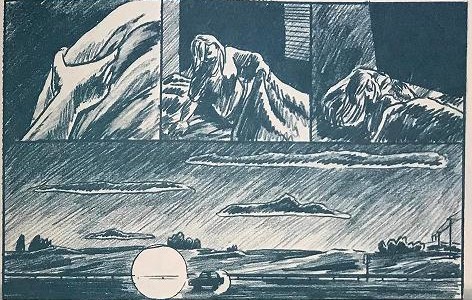 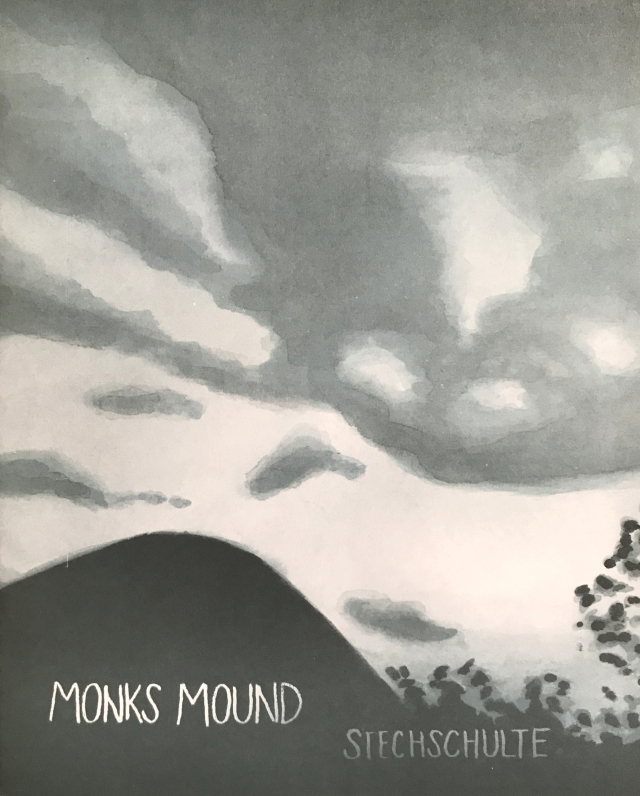 Oblique connections are a recurring theme in Conor Stechschulte‘s ongoing Generous Bosom graphic novel series, but the disparate threads that run parallel to each other in that multi-faceted narrative appear to be heading for some sort of convergence as the sure-to-be-big finale approaches; in his latest self-published standalone comic, though, entitled Monks Mound (or, if you prefer, “Monk’s Mound,” as the titular location is referred to in the text of the book itself), the connective tissues linking one of the stories to the other are left entirely in the hands of the reader to either discover or, as is more likely to be the case, intuit for themselves. The end result is a challenging and deliberately disjointed read, part family drama and part history lecture, the overall tone and feel of which is something akin to an ABC After School Special written and directed by David Lynch.

Is that me complimenting the work? Most assuredly. But “work” is the key word here, and you’d better come into this beautifully offset-printed (in metallic grey and blue/black inks on suitably atmospheric cream-colored paper) comic prepared to do some. 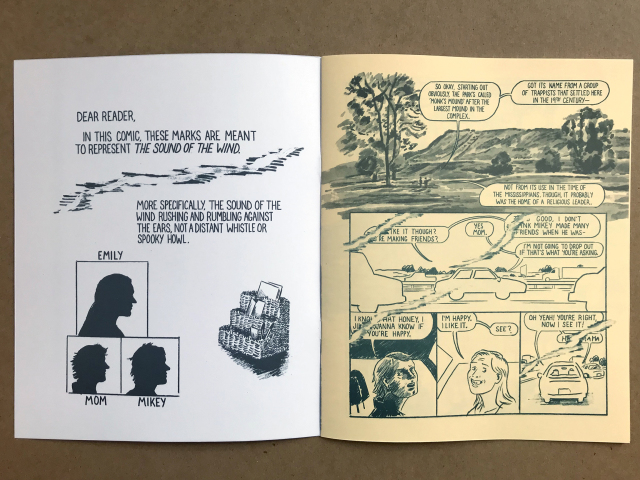 Our focal point here is college student Emily, returning home on a school break to visit her possibly-mentally-deteriorating mother (who’s never given a name), and not-really-recovering gambling addict brother, Mikey, who appears to be a few years her senior. One of mom’s forgetful spells results in her leaving an envelope full of cash meant to pay a handyman/contractor sitting out in plain sight, and Mikey being the sort of guy he is, well — you know which way this is headed, I’m sure. Nobody in this country is more than about a 30-minute drive from a casino at this point.

Concurrent with this — I think, at any rate, although precisely when it’s taking place is unclear — a park ranger gives a guided tour of a Mississippian mound site that may or may not be located somewhere near to where our little tragedy-in-the-making is playing out, not that proximity is really necessary to make this intriguingly experimental “split-screen” structure work. The only hard-and-fast connection between the two? Stechschulte’s inventively-delineated “sound of the wind” effect that both blows and flows between panels, occasionally obscuring specific words of dialogue, but always accentuating the actual meaning of what’s being said. 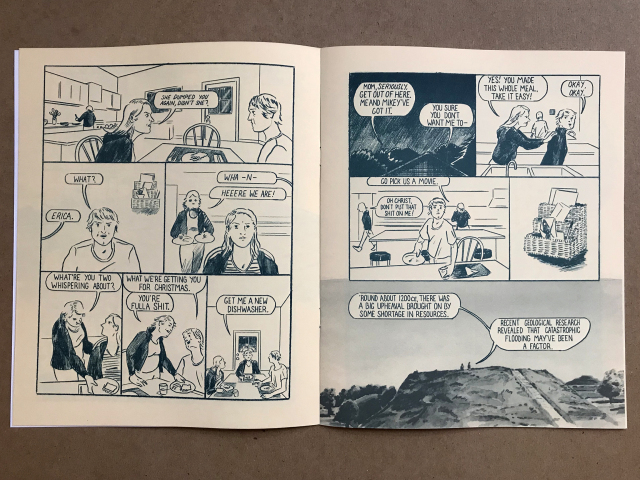 Those familiar with Stechschulte’s cartooning ouevre will be well familiar with these sorts of contradictions that are anything but, as well as his frequently dense panel layouts and precise utilization of negative space, but to say he’s firing on all cylinders with these Mazzuchellian tropes is an understatement — there is no doubt, from panel one of page one onward, that you’re in the hands of a master of visual storytelling operating at the full height of his considerable powers in this comic. It’s so literate, in fact, that even the most comics-illiterate reader will have precisely zero difficulty “picking up” what Stechschulte is “laying down.”

I did, however, say that you’d be well served to bring a hardhat and lunch pail with you to this one, and so it is — as events move toward a conclusion that can best be described as both entirely surprising and anything but (again with the contradictions!), it’s up to each reader to decide for themselves whether or not the “twist” Stechschulte deploys either represents the apex of irony, or its complete negation, as well as whether or not the guided tour of the mound is a device meant to amplify or neuter said “twist.” By my count, then, that means there are at least four separate obvious readings one can subscribe to when it comes to this book, each no doubt effective, and which one you decide is correct likely says as much about you as it does the comic itself. How’s that for an open-ended narrative? 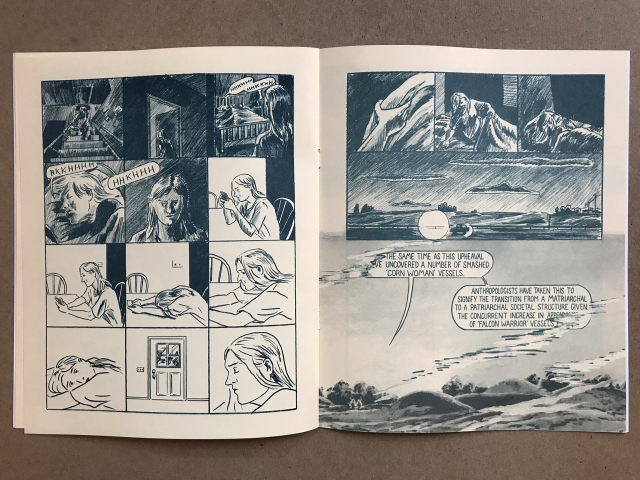 Which isn’t at all to say that events are in any way confusing or unclear here — anything but, it’s all pretty cut-and-dried on the surface. But, like the archaeological site it’s named after, once you start digging a bit deeper, new discoveries that may upset and overturn one’s already-established view of things present themselves, and how to assemble them into a new, perhaps more accurate, paradigm is huge part of the challenge — and dare I say the fun (although, admittedly, I have a weird idea of what “fun” is) — inherent in this work. A detailed forensic analysis leads to more questions than answers, and while I don’t wish to “spoil” anything, the “happy” ending Stechschulte serves up is one tinged with considerable unease given that it leaves a major problem unaddressed simply because it engenders the most temporary of positive outcomes.

One more contradiction before all is said and done here, and this one comes about as a result of a considered reading of the book (several of them, truth be told) rather than being contained within it per se — I could go on and on for some time yet about the wonders, those both hidden and those in plain sight, on offer in these exquisitely-thought-through (and just as exquisitely-presented) pages, but I honestly feel as though I may have said too much already. What I think is one thing — and I think very highly of Monks Mound indeed, as I’m sure is painfully plain as day — but this is a comic you literally need to experience, and even more importantly to evaluate, for yourself. Odds are better than good that you’ll find yourself loving it as much as I did — but frankly, even if you don’t, you’ll at the very least come away from it mightily impressed at the formal skill of Stechschulte’s cartooning prowess.  I guess there’s no such thing as a “social archaeologist,” but if there were, he’d probably be sitting very near the top of the field; as an artist, however, he may just be in a class by himself.