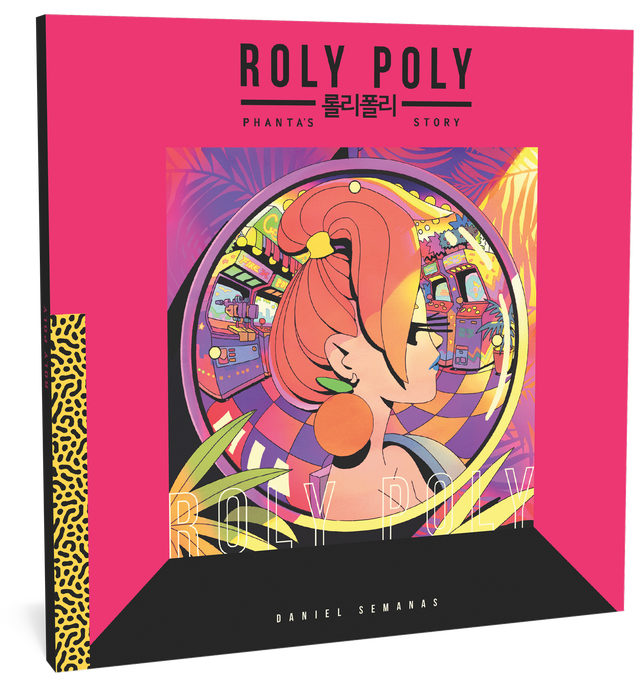 Not to sound too dramatic — or maybe that should be melodramatic — right out of the gate, but it strikes me that any way you look at it, the much-vaunted “age of reason” is over.

Oh, sure, social and political commentators have been telling us at least since the elevation of Donald Trump to the presidency, if not earlier, that we are living in a “post-truth world,” but I think that misses the larger point: Things are happening so fast, and they’re coming at us from so many directions simultaneously, that for many, it’s simply flat-out impossible to determine what the truth even is anymore.

Consider, if you will: In Dez Vylenz’ intriguing-if-flawed documentary The Mindscape Of Alan Moore, the noted comics author and occultist opines that human culture was essentially analogous with ice for the first x-million years of our existence as a species, given that the  amount of information and knowledge took literally aeons to effectively double; then we entered a stage where culture was comparable to liquid since the amount of information out there was doubling every few centuries, then every decade or two — and now, with the total available amount of information doubling dozens, if not hundreds, of times daily, culture is effectively turning into steam.

Okay, it’s maybe something of an over-simplification on Moore’s part, but that doesn’t mean he’s necessarily wrong. The larger cultural zeitgeist is completely amorphous right now, in a constant state of flux — very little, if anything, makes any sense, and by the time we’ve gotten around to sucking in a good, deep breath and taking stock of the situation, whaddya know? It’s all changed — again. All of which leads me to my “big question” for the day: If the here-and-now is this convoluted, this indecipherable, this downright unknowable — then what of the future?

It seems to me that all bets are off, and that anything and everything from nuclear annihilation to a leisurely, post-work utopia are “on the table” to one degree or another, with several possibilities that fall somewhere between the two emerging as front-running possibilities; but it’s not really what will or might happen that I’m particularly concerned with for purposes of this review — rather, I’m wondering where our conception of the future stands right at this moment.

Unfortunately, I don’t have an answer to that. Fortunately, Brazilian cartoonist Daniel Semanas does. 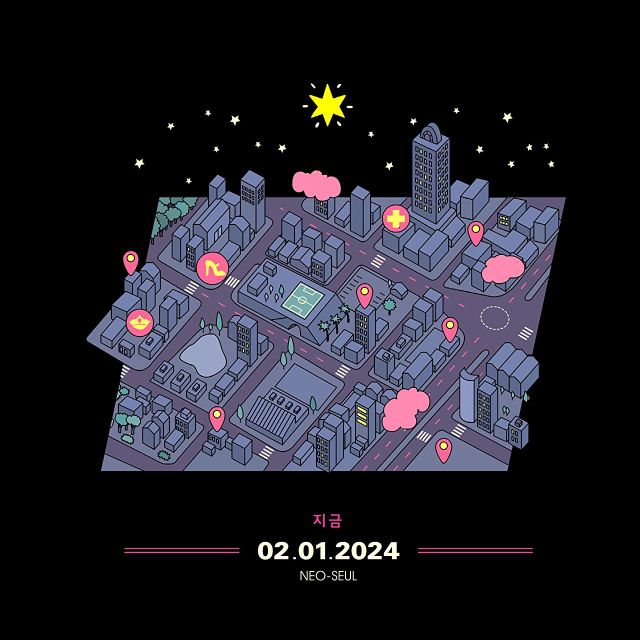 Set in 2024, Semanas’ debut graphic novel, Roly Poly — subtitled Vol. 1, Phanta’s Story — posits a society that makes no real sense, but that actually makes perfect sense (if that even makes sense) if we simply go with the digital flow we’re already swept up in. His protagonist, Korean super-brawler Phanta, is locked in a battle of wits and wills with a social media “celebrity” whose obsession with her betrays all the sublimated sexual longing of a typical “love/hate relationship,” albeit one that’s amped up to 11, and then some, with her only “solution,” at least as she sees it, being to “beat” him by topping his number of online followers. In her hyper-competitive zeal she launches a gambit rife with something well beyond desperation, but don’t tell her that — she’s nothing if not fiercely confident, and now she’s going to worm her way into becoming the newest member of the world’s most popular “K-Pop” group (I don’t think they’re referred to as “bands”) by first infiltrating a neo-psychedelic drug cult that they’re affiliated with. From there, she figures, the pixellated sky’s the limit.

If that sounds crazy, trust me when I say that it looks even crazier: Semanas’ visual arsenal betrays influences as wide-ranging as art deco, futurism (of course), Manga, and even pop art, but the resultant mixture, when filtered through his own kaleidoscopic perception, is quite unlike anything else committed to the comics page previously — this is singular cartooning in the strictest definition of that term, and you know from page one that the illustration both can and should do the bulk of the storytelling “work” in this book. 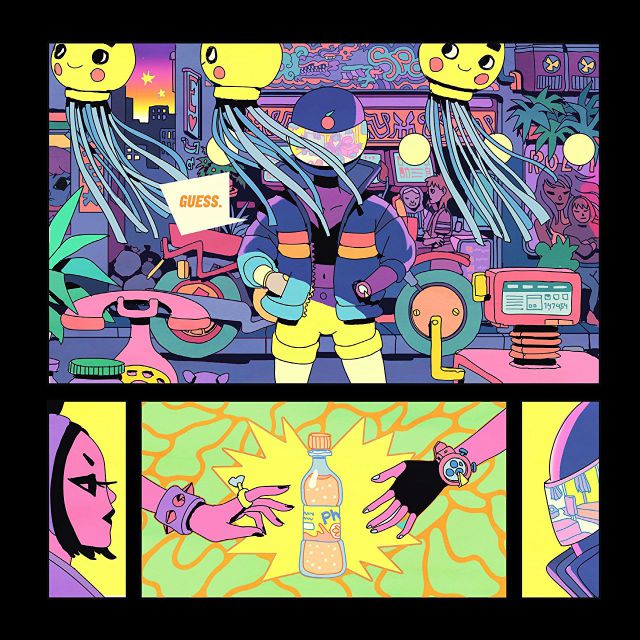 To his great credit, assuming such a personage as “Semanas The Writer” exists, he gets the hell out of the way and only occasionally punctuates his visually-based narrative with the bare minimum necessary amount of sharp, economic dialogue, apparently (and correctly) viewing words — descriptive language in particular — in purely utilitarian terms. Don’t take that to mean that this is a “quick” read, by any stretch — you’ll spend far too much time unpacking the densely-layered veritable vocabulary of imagery on every page, in every panel, to get anything less than your money’s worth out of this thing — but it’s nevertheless a breakneck one, given that Semanas starts with his foot all the way down on the accelerator and never lets up.

And this is all on the purely liminal level, mind you. Underneath that, there is an honest-to-goodness cosmology being established right beneath our noses, one that centers on the power of belief to shape one’s view of reality, and the tension that necessarily exists between individual and group perceptions of the world and everyone and everything within it and, by extension, group perceptions versus broader, consensus, actual reality — assuming such a thing even exists. Or that it ever did. 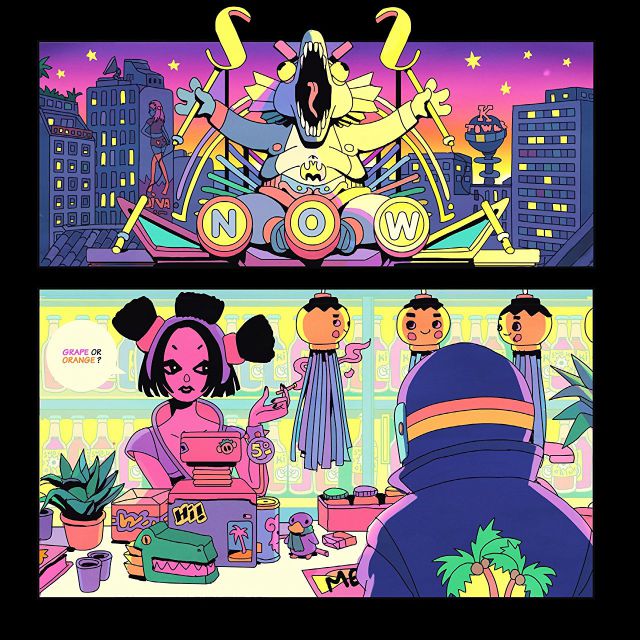 On the technical and production side of the ledger, publisher Fantagraphics has pulled out all the stops to present this challenging, consciousness-expanding material in a format that it not only deserves, but demands, the slim and sturdy hardcover book — printed on thick, glossy paper that accentuates the richness of Semanas’ color palette, especially on the numerous black-bordered pages — enclosed within an open-ended slipcover, but while style (indeed, a flood of at-first-glance contradictory styles, plural) is fully integrated with substance in the world of 2024, at the end of the day a clear line from here to there (or should that be then?) is left to the reader to determine for themselves, the heavy-handed “cautionary tale” tropes that ultimately undercut Rick Remender and Sean Murphy’s Tokyo Ghost (the only other comic to seriously attempt what Semanas is doing here, and with far less satisfactory results) nowhere to be found within the framework of a story that reflects its own subject matter by plunging readers in at the deep end because, hey, that’s the only end that exists anymore.

What that means — at least in this critic’s estimation — is that Roly Poly is something as utterly confounding as it is absorbing, as exotic as it is believable, as multi-faceted as it is entirely upfront and “in-your-face.” If that sounds contradictory, it is, but come on — this is the first holistically-constructed comic book vision of the future that’s extrapolated from a present we don’t even fully understand. How could it be anything else?