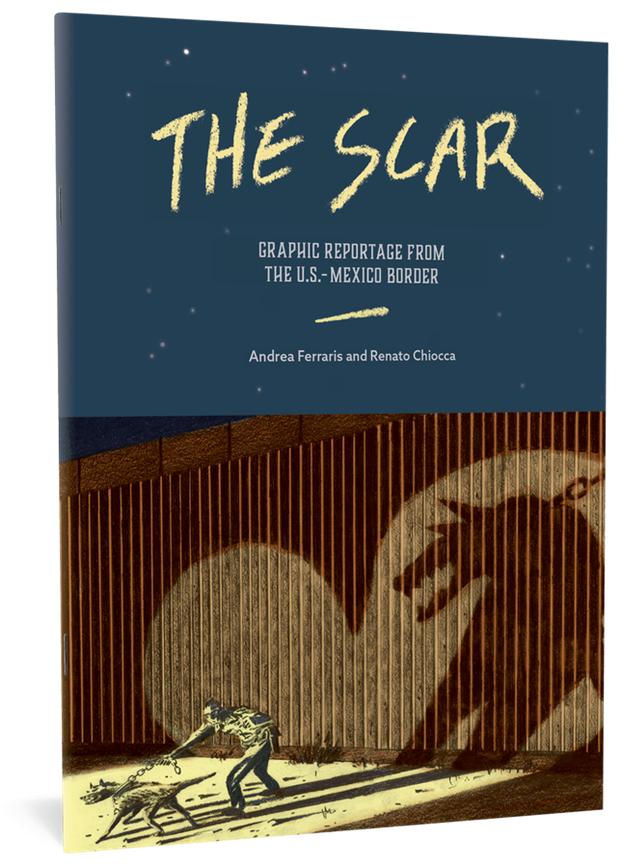 As I write this review, “president” Donald Trump is pathetically scrambling to legitimize his inherently illegitimate so-called “state of emergency” along the US-Mexico border, a stunt undertaken in order to commandeer funds for his pipe-dream of a “wall” by executive fiat. A genuine “emergency” has been unfolding, with disastrous consequences, at the border for a long time, it’s true — but it’s nothing like Trump would have you believe.

Italian cartoonist Andrea Ferraris and his documentarian colleague/creative partner, Renato Chiocca, know all about this real “emergency,” though, because they’ve seen it firsthand — and they know it’s got precisely fuck-all to do with some supposedly free-flowing “supply line” of drugs and MS-13 gang members out to rape our daughters, burn down our homes, and butcher our pets. The actual emergency is a humanitarian one, an economic one, even a logistical and conceptual one, as increased militarization of what was once a fairly open expanse, our country naturally “guarded” by hundreds of miles of frankly deadly desert and an equally intimidating river, has actually created and then exacerbated the very problem it was ostensibly designed to solve. 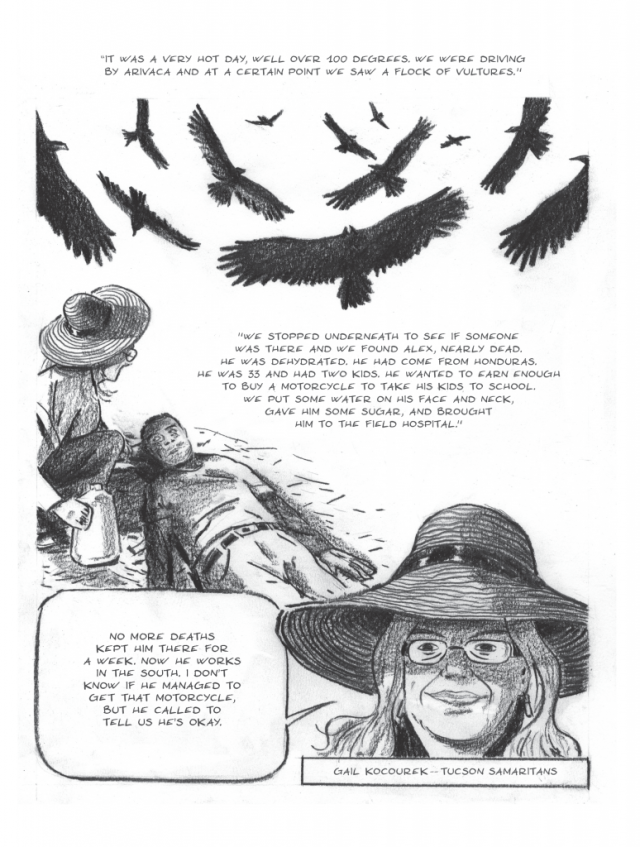 In the all-too-brief 40 pages that make up their new Fantagraphics Underground release, The Scar (subtitled Graphic Reportage From The US-Mexico Border), Ferraris and Chiocca bob and weave between first-person verbatim accounts and broadly-argued, highly emotive and resonant statements of intent and opinion, that together form a more cohesive whole than it probably sounds on paper that they by all rights should: one that follows in the footsteps of Joe Sacco, Sarah Glidden, and others, but has all the immediacy of the “right here, right now,” given that they made their pilgrimage to Tucson/Nogales in the summer of 2017, immediately following — and as a direct extension of — promotional work in relation to Ferraris’ previous book, Churubusco, a historical account of deserters in the Mexican-American war who took up arms against the US army they were once a part of in a last, desperate stand at the border.

So, yeah, it’s probably fair to say that Ferraris had some familiarity with, even affinity for, this region, its history, and its people, but beginning with the murder of 16-year-old Jose Antonio Elena Rodriguez at the hands of a Customs and Border Patrol agent named Lonnie Swartz when he fired through the steel-slat “fencing” over to the Mexican side of the border and killed the kid, already-extant tensions in the region ramped up considerably, and upon arrival, Ferraris quickly came to realize he had no idea of the size, scope, and scale of the social, political, economic, and cultural minefield he was walking into. A scar is a fine metaphor for our militarized border on the whole, but for the people living in the area? It’s more like an open wound. 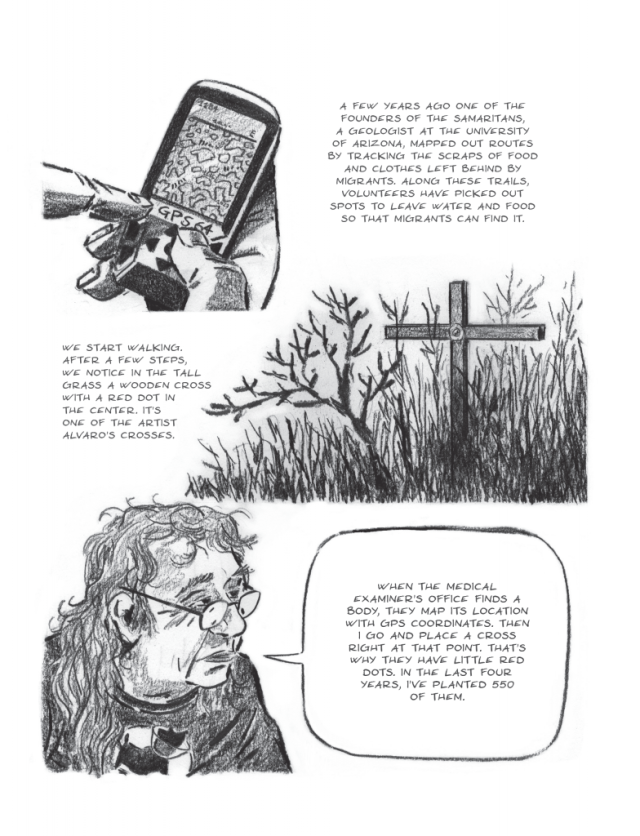 Humanitarian organizations such as Tucson Samaritans, who place food, water, blankets, and other supplies along “routes” taken by migrants, and No More Deaths, which provides them with medical services, do necessary work to help alleviate the suffering of people willing to risk their fucking lives in order to escape certain death at home, but as we learn here, they too are under assault from “law” enforcement, and would barely have the resources to continue their vital missions even absent CBP and ICE harassment. Ferraris’ expressive graphite and charcoal illustrations capture the unique combination of desperation and defiance that drives the people associated with these groups forward, but even more affecting is the quiet righteousness of Colombian artist Alvaro Enciso, who leaves hand-made wooden crosses at sites where migrants have died, knowing damn well that his are the only memorials they will ever receive. 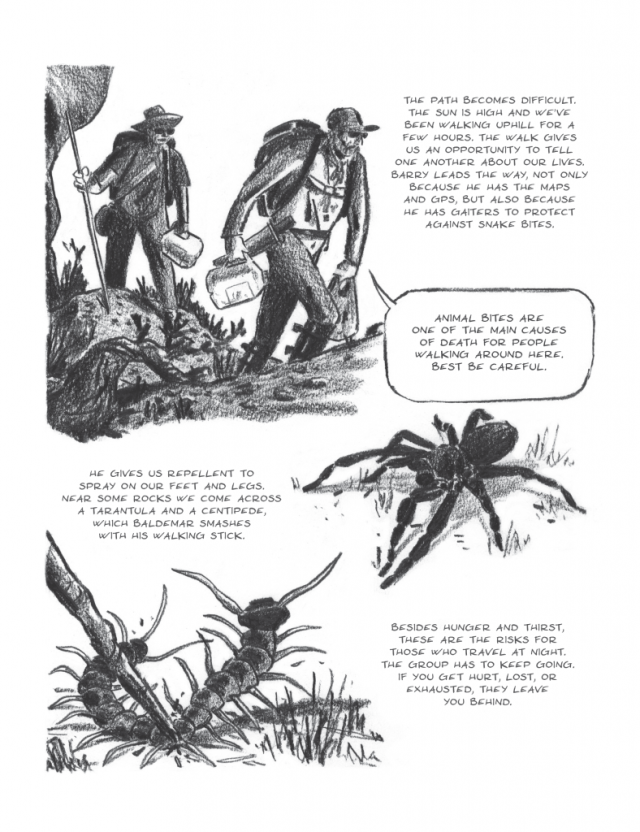 Make no mistake: There are some very beautiful, in the most all-encompassing sense of that word, people that we’re privileged to meet here, folks whose hearts are so big and whose personal stories are so profound that you almost feel unworthy of being part of the same species as them — but the beauty of Ferraris’ art isn’t solely reserved for them. His evocative landscape illustrations and amazing wildlife renditions are equally imbued with precision, care and, most importantly, a hell of a lot of feeling. This really is a book you feel every bit as much as you read — even in its most cut-and-dried, “straight reporting” segments — and much of that emotion is expressed to readers by means of the art. There are pages in here that will well and truly suck you right into them and leaving you staring in awe for a good long while. Some, dare I say it, are even mesmerizing.

That ability to capture the essential truth of the large and small alike also carries over into the authorial tone and narrative structure of the book, lives met along the way gaining a kind of cumulative power and strength as events proceed, but each utterly unique and individual unto itself. A return visit to the tragic murder of young Mr. Rodriguez, now making it way toward the Supreme Court after an earlier (and fucking preposterous) acquittal of Swartz and two hung juries, hammers home the utter insanity of the idea that the U.S. legal system is qualified to decide whether or not a citizen of another country altogether, killed on his home soil, is entitled to justice — but even that is just part of a much larger ball of batshit-craziness, that being the bizarre and inhumane notion that we have the ability to arbitrarily decide where “our” land stops and “theirs” begins, and the subsequent “right” to use the full force of the world’s most expensive and deadly military and police apparatus to enforce our entirely one-sided dictates.

There’s an “emergency” at the border, all right — and it is the border. And where other treatises examine how to “secure” it, The Scar asks a far more vital question: Why even have the damn thing in the first place? Its very existence, at least as presently constituted, is an affront to us all.