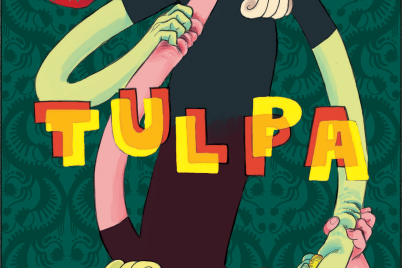 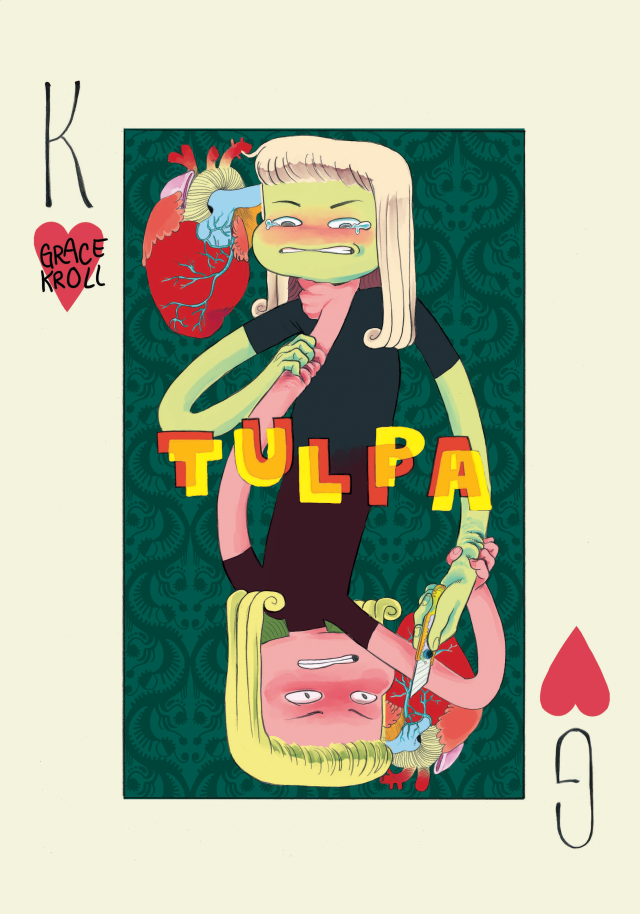 To the extent that I understand the term, a tulpa is an independent thoughtform created by a person that shares their brain but has thoughts, feelings, etc. of its own. Tibetan monks were — and may still be — big on these things, and David Lynch’s interest in their teachings and traditions undoubtedly played a big part in the inclusion of tulpas (or is that tulpae?) in Twin Peaks: The Return, although he added the twist of giving them actual, physical reality by means of rather standard hair-and-blood magickal conjuring. That’s how we ended up with three different versions of Special Agent Dale Cooper. But I guess that’s neither here nor there for purposes of this review, as the one in the comic we’re here to take a look at, Seattle-based cartoonist Grace Kroll’s self-published Tulpa, exists purely within her mind — and isn’t exactly the most welcome of guests.

A kind of incorporeal manifestation of Kroll’s doubts, insecurities, neuroses, and anxieties rolled up into one entirely unhelpful package, her own tulpa’s lack of physicality doesn’t preclude it from being a massive pain in the ass, and a kind of permanent obstacle to the ability of its host/creator to find not just happiness, but even simple contentment. In fact, if it had a body, it would probably be easier to deal with, because then you could at least just shoot the damn thing. 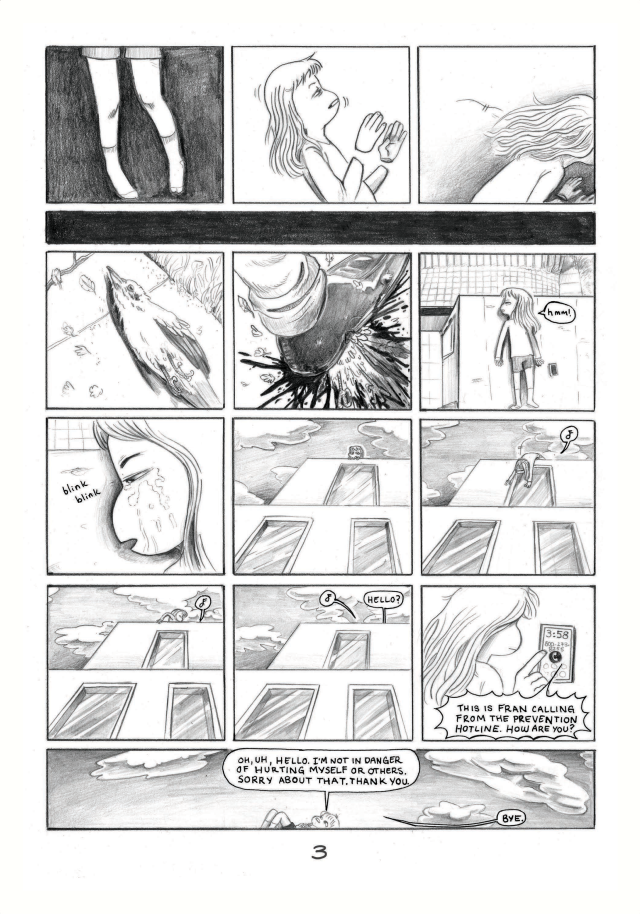 Which is probably me being too jocular by half in relation to this material, because truth be told this is one damn harrowing read — and yes, that’s meant as a compliment. Kroll wisely prefaces her comic with something of an oblique “content warning” on the inside front cover, and proceeds to give us 24 pages that prove why such a disclaimer was necessary : even by autobio standards this is remarkably frank and unvarnished stuff, and likely as therapeutic in practice as it clearly was in production. Whether she’s at the gym, having trouble getting out of bed, interacting with others socially, or bound and gagged on a sofa, our protagonist/authorial stand-in’s constant companion is always throwing freezing cold water on things, which affords us the opportunity to look at any and every situation presented from a “pro” and “con” perspective, and to recognize the gulf that needs to be crossed in order for Kroll’s own tendencies toward self-care and self-harm to somehow, finally, reconcile. Analytically, she has a firm grasp on what she’s doing and why at all times — her frank dissection of the healthy psychological benefits of consensual BDSM is particularly welcome and frankly long overdue — but oh, how the ghost of her own negative self-image, given a distinct persona and voice of its own, lingers. And casts zingers. And always, and I do mean always, points fingers.

Those fingers are aimed squarely at the artist herself, of course, depicted here in a form that’s recognizably human but with just a dash of anthropomorphic animal, perhaps even alien, characteristics, further cementing the notion one arrives at early on that, at least visually, Kroll appears to be giving herself a little bit of “breathing room” between self and subject visually that the narrative itself, by design, in no way provides for. It’s an understandable move, as well as a smart one — after all, we’d also like to hope that our ostensible heroine’s internal world isn’t in quite as extreme a state of constant struggle as it would appear to be, even though we know that hope is likely to be entirely in vain. 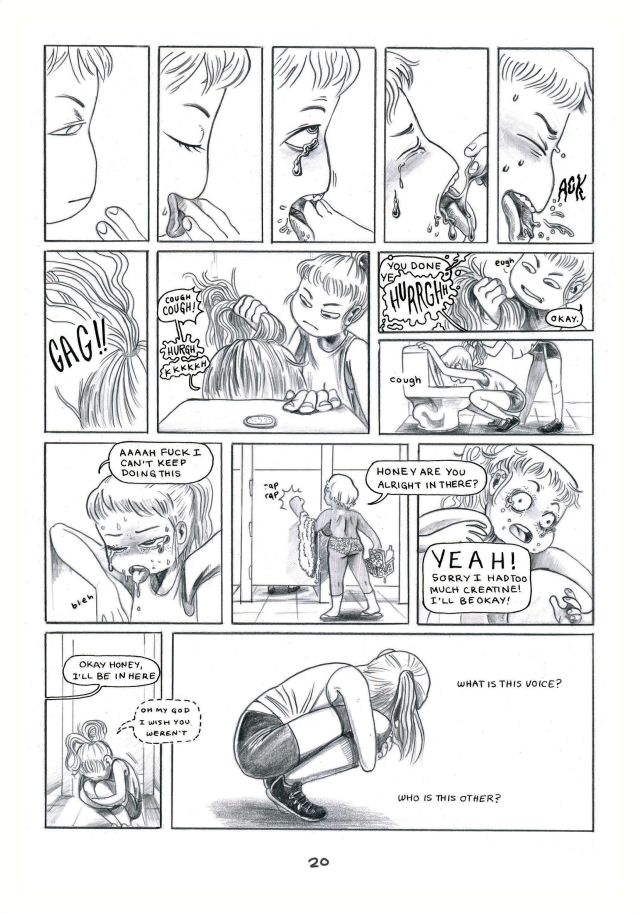 Even with all this in mind, though, we may as well address the elephant in the room by admitting that “yeah, I know I’m fucked up” is almost the default setting for autobiographical comics these days, and has been for some time. The key difference here, however, is that Kroll doesn’t play for sympathy so much as actively earn it — her cartooning is so inherently strong and expressive that it reaches out and touches readers at their core without resorting to cheap sentimentality or deliberately manipulative exaggeration. I mean, take a look at the pages reproduced here and tell me that her sublime use of shading, her expressive body language, her rich faces don’t hit you right where you live. There’s maybe a hint of Carol Swain at one margin and of Remy Boydell at the other, but this is unique and expertly-crafted illustration that has a living, beating heart at is core, and is more than capable of picking up the responsibility of most of the storytelling duties, leaving Kroll free to be selective and sparse with her dialogue and captions in each of the interconnected — though not necessarily linear — vignettes that comprise this book’s slim (but no less powerful for that fact — quite the reverse, actually) contents. 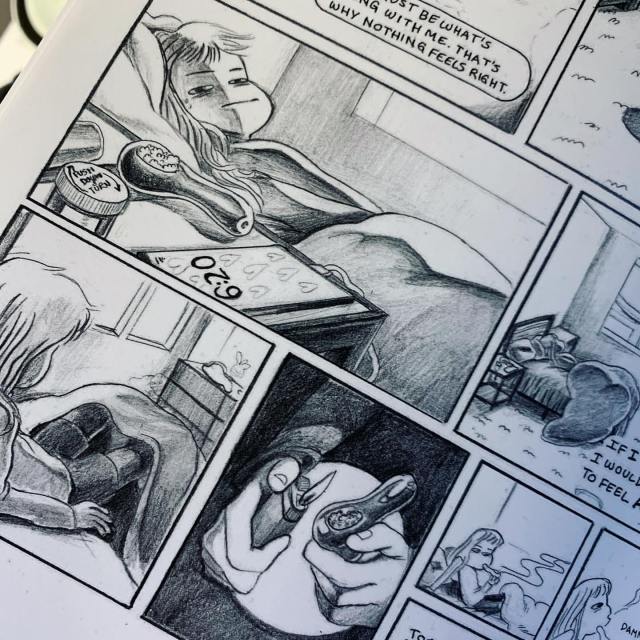 Acts of self-aggrandizement are common as dirt in the autobio game, acts of genuine self-reflection considerably less so. Kroll leaves them both in the dust, however, by committing an act of sheer and unmitigated bravery with this comic, and it’s no bullshit to say that for someone suffering though the same or similar issues relating to their own self-actualization and even sense of self-worth, this is a book that has the power to potentially save their life. Not by offering the usual “things will get better” bullshit, but by letting any reader in such a position know that they’re not alone, and that there are voices other than that of their own tulpa that are worth listening to, that understand, that have been there — and may even be there still. The road could very well never get easier, but art offers a way to at least communicate anguish, if not resolve and/or banish it, and this particular work of art does so with more forthright honesty and integrity than any I’ve come across in a good long while.

Tulpa is available for $5.00 directly from Grace Kroll at https://ingestpress.bigcartel.com/product/tulpa