The double-edged sword for any actor or actress in playing a role too well is that they run the risk of forever being identified with that character — and only that character. Leonard Nimoy famously went on a journey to establish that he was not Spock (before accepting that he was — kind of — maybe), while Leslie Nielsen’s turn as Frank Drebin in the NAKED GUN movies served to overshadow an entire earlier dramatic career. For some, it’s a blessing that performers readily embrace, grateful to have achieved a type of fame that others can only dream of — George Wendt has gone on record stating that he’s content to simply be known as “Norm from Cheers” for the rest of his life — while others spend the remainder of their careers struggling against that identification. That’s what makes Caroline Williams’ turn as beleaguered, vampiric DJ Amy Marlowe in TEN MINUTES TO MIDNIGHT so extraordinary. It’s at once a case of an actress paying homage to the role that has, in many ways, defined her for decades while also transcending it, delivering a performance that’s sure to become as synonymous with her career as TEXAS CHAINSAW MASSACRE 2’s Stretch. 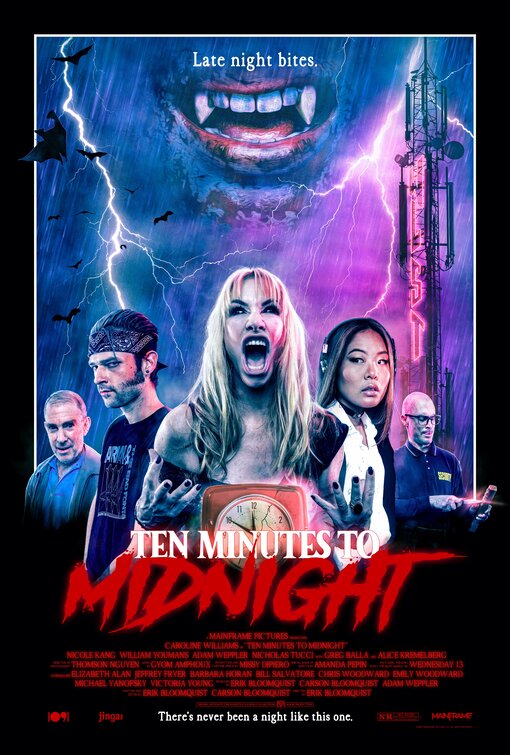 TEN MINUTES TO MIDNIGHT wears its ’80s-midnight-movie heart proudly — and bloodily — on its sleeve, setting up everything you need to know in the first five minutes: Amy Marlowe is the long-time late-night DJ at a small local radio station in a coastal town (delivering some serious Adrienne Barbeau/THE FOG vibes), spinning classic rock and dispensing advice to callers for the last several decades. The station is struggling to stay afloat, though, and the decision has been made — without Amy’s knowledge — to quietly replace her with Sienna (Nicole Kang), a much younger woman with little experience in the sound booth but plenty of PR potential. Despite her years of loyalty — and their own fraught romantic history — Amy’s boss Robert (William Youmans) informs her that tonight’s broadcast will be her last. With a hurricane bearing down on the city, trapping the station staff indoors, Amy tries to put on a brave face while struggling to come to terms with the end of her career, the spectre of age, and her future in a world that places an expiration date on women’s lives. Of course, this is a horror movie in addition to being a meditative drama, and there’s one more factor at play: Amy was bitten by something on her way into the station this evening, and as the night wears on — and the storm worsens — she begins to transform into something both more and less than human…

While there’s plenty of hallucinatory freakouts, bloodshed, and monster movie moments to satisfy genre fans, TEN MINUTES succeeds precisely because it allows the horror elements to take a backseat to more human moments. Writer/director Erik Bloomquist and cowriter Carson Bloomquist have expertly crafted a screenplay that functions on multiple levels, and which succeeds at most of them. While retro horror is something of a cottage industry these days in the wake of media like Stranger Things, TEN MINUTES TO MIDNIGHT — rather than trying to play it straight- is simultaneously an homage to the media of the ’80s and an acknowledgement that era is long dead and isn’t coming back except in our memories. There’s a mournful atmosphere that hangs over the film, encapsulated by harsh fluorescent lights and windowless rooms and wood-paneled offices that recall the interior design of a lost era that’s rapidly slipping away — everything here looks lonely and forgotten, placing the viewer in Amy’s headspace. It all serves to make the film into an elegy for personalized, analogue technology and culture, contrasting the intimacy and warmth of Amy’s personalized, vinyl-driven broadcasts to the cold, digital corporatization of music represented by Sienna, who has an appreciation — but not understanding ­­— of what and who she’s replacing.

At the same time TEN MINUTES is tipping its hat to the loss of an era, it’s also shining a spotlight onto the people who encapsulated it, asking why we feel a compulsion to equate age with irrelevance rather than experience — and answering that question with a few uncomfortable truths. While beauty standards have begun to shift over the past several years, hegemonic corporate America and vast swaths of the population still equate woman’s beauty, sexuality, and worth as a human being directly with her youth, no matter how attractive and capable she remains with age. Pointedly, Robert — while not a bad looking man by any means — is even older and less conventionally attractive than Amy, but he’s not going anywhere. Despite any strides we may have made, TEN MINUTES coldly reminds us, you can still have the sex appeal and/or talent of someone like Amy, but if you’re past a certain age, you’re of no use to a youth-addicted culture still centuries steeped in toxic masculinity and entrenched sexism. It’s a more powerful statement than you’d expect from “just” a popcorn vampire movie, and it elevates things to unexpected and satisfying heights.

Buttressing that thesis is the fact that Caroline Williams is at the top of her game here, and she’s pulled out a potentially career revitalizing performance that shows what she’s really capable of, and which reminds the world of the real talent she’s got. There’s a depth and nuance she brings to Amy that’s rare for a movie of this conception, and the absolute best parts of the film are those when she’s just allowed to engage in dialogue with another character. Williams brings her own lifetime in the spotlight to Amy, giving an authenticity to the character’s anxieties about age and relevance. These are also the moments when the script most realizes its potential, with some genuinely touching and haunting moments as Amy looks back on a life well-lived but cut short. The Bloomquists’ script calls for Williams to hit a variety of notes — indignant anger, vulnerable fear, earthy sensuality, stoic acceptance — and she nails every one of them with aplomb. In the hands of another actress, Amy Marlowe could come across as a one-note, altogether more campy character — an aging diva desperately trying to hold onto the past in the BABY JANE mold. Rather, it becomes the kind of role that lodges itself in your mind: nuanced and multifaceted and filled with a special kind of life that owes itself to the iconic.

Perhaps most compelling is what I’m calling the Silent Hill scene, which epitomizes the energy and pathos of the entire film in one tour de force sequence. At a pivotal moment — which may be real, hallucinatory, or a combination of the two— Amy enters a blackened void to answer her final call, which comes from a vintage ’80s-era telephone. An entire five minutes or so unfolds during which Williams talks to a voice on the other end of the phone with minimal cuts. It’s another woman, calling to thank Amy for her years of “company” on the radio and wish her a happy retirement. Over the course of their conversation, the women discuss everything from the passage of time to fear of the future to shared anxieties over femininity, and it’s amazing. Standing stationary, Williams delivers what may be the single best scene of her career, and the dialogue she shares with her unseen costar is phenomenal, once more touching on topics and ideas not usually addressed in something like this. It’s the stuff of critical-acclaim off-Broadway shows.

Not that Williams’ costars don’t deserve their own credit. While she may be the central character this is still something approaching an ensemble cast, and every one gets their moments to shine, particularly Alice Kremelberg and Greg Balla, who play Amy and Robert in a flashback to one of her first nights at the station. The scene is powerful for its fluidity of tone, shifting seamlessly between optimism (Amy’s excited to be at the beginning of her career), nostalgia (present day Amy is “watching” this with the knowledge of how things are going to end), creepiness (Robert makes some awkward sexual overtures to his new employee) and even some faint hints of romance (there’s the implication that Amy may reciprocate- but is unsure how to express — some of those feelings). It’s another fantastic moment that does a lot with seemingly little, and the writing, acting, and directing here all speak to great depths of potential on the part of everyone involved.

TEN MINUTES TO MIDNIGHT is not a perfect movie. There’s a tendency for the vampire imagery and references to get heavy-handed, some of the SFX work doesn’t quite land in the way it should, and there’s some severe tonal whiplash following the aforementioned Silent Hill scene, as we follow Amy into yet another alternate realm for a surrealistic retirement party. In a way, that’s almost appropriate for a movie about age — it’s not about the destination, it’s about the journey, and the one that TEN MINUTES TO MIDNIGHT takes us on is imminently satisfying. Just as we shouldn’t gauge the value of a life on how it ends but rather how it was lived, TEN MINUTES TO MIDNIGHT should be judged according to the sum of its parts. Taken in that regard, it’s a rare achievement, serving at once as a beautiful ode to horror movie nostalgia and a heavy-metal parable about age and the need for meaning. If for nothing else than Williams’ performance, TEN MINUTES TO MIDNIGHT is destination viewing, preferably on a Friday night with a bowl of popcorn and a storm outside.