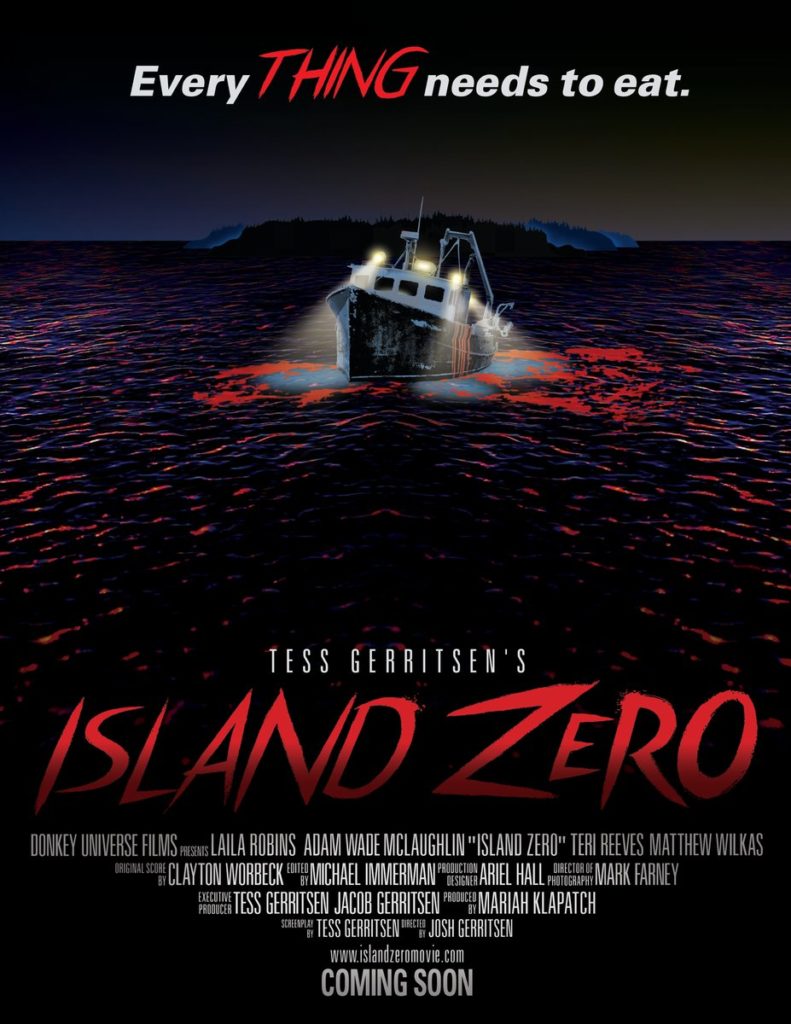 Is it blasphemy to suggest that grindhouse flicks can be quiet?

Well, they always have been, at least for certain moments. In fact, arguably a key part of the texture of such movies is the erudite earnestness that peppers the general mayhem. The mad scientist rationalizes his cruelty. The high school biology teacher speculates about alien anatomy. The anthropologist explains why it’s worth visiting a remote Amazonian tribe, even if his team is armed only with graduate degrees.

So one of the many notable things about Josh Gerritsen’s directorial bow ISLAND ZERO is how it strikes a flawless balance between exposition-happy scenes and survival-horror breathlessness. That means there’s lots of dialogue heavy with phrases such as “apex predator” (as well as plenty of effective if low-key scenes of character development) in between sudden bursts of gore. The script — by Gerritsen’s mom, Tess — is a slow-burn generally, but not only are these nice folks trapped on a remote island off Maine pleasant enough to pass the time with, but the eventual payoffs are more than worth the wait.

Consider that at about 70 minutes in, there’s the kind of scene that I didn’t know I wanted, but when it arrived, it was goosebump-inducing in all its goofy audacity. The ostensible villain of the piece is forced to come clean by those who have made it through the first hour intact, and is asked, simply, “What’s ‘Island Zero’?” A long pause. The camera dollies in slightly…

If that exchange seems a tad retro in feel, I have some news for you.

That’s right. Bathing in its own mild sense of foreboding, its cute TV-style romances, cranky oldsters and precocious kids, ISLAND ZERO represents the best kind of throwback horror — it displays plucky indie resourcefulness at every turn, but without self-conscious nostalgia dripping off everything. And for a film to have any more happen off-screen, it would probably just have to be referencing an entirely different movie. But to Gerritsen’s credit, you never feel cheated by all that remains unseen. Instead, the sense of expectation heightens the impact of the visceral elements when they eventually arrive, just like in ol’ timey horror. And arrive they do, with limbs ripped off, torsos bisected, and the like. Sure, the strategic edits are somewhat obvious, but that’s okay, because it fits the overall feel of the production.

That ISLAND ZERO recalls countless siege movies — as well as marine-based eco-disaster epics such as BARRACUDA — probably goes without saying, but what’s neat is that the filmmakers have fashioned a unique new monster, despite all the comforting genre touchstones. Okay, so the monster itself can look kinda cute as it wiggles around in stalking mode. Again, that’s part of the movie’s considerable charm: not the fact that one can be patronizing towards it, but that it’s thoughtful every step of the way, so that even the things that don’t fully work reek of hard work and creativity. In short, just pass the popcorn and the shotgun, sit back, and enjoy.

ISLAND ZERO is now available on iTunes, Amazon Instant Video, Google Play, and your local cable provider, with a DVD release yet to be announced.

Peter Gutierrez
The same Peter Gutierrez some know from comics, media literacy, photography, other writings on movies. Not the expert in suicide.

Saw ENTER THE DRAGON during its first run.