The only natural disaster I’ve ever experienced firsthand was Hurricane Sandy, in 2012. Living in a coastal state — New Jersey — hurricanes were a generally common occurrence, but before Sandy, I’m pretty sure if you polled most locals living in the middle of the state about their opinions on hurricanes, they’d describe them more as extended annoyances than life-threatening calamities. Sandy was a different beast altogether, and almost five years later, there are still more than a few scars visible across the state, if you look for them.

My own experience with the storm was pretty normal — locked up in my childhood North Trenton home, with the rest of my family, trying to distract ourselves from the sound of wind, ripping against the neighborhood. However, at one point I actually had to go outside, the reasons for which escape me, but what I saw out there has stuck with me, even though I couldn’t have been out for more than two minutes. Standing on a stretch of sidewalk I’d stood on countless times before, I saw that my neighborhood had been turned into a wet, grey, howling mess. Street debris in Jersey is a problem during the best of times, but during Sandy, it practically turned into a stream of projectiles, thanks to a wind that seemed almost consciously nasty. At one point, I saw a fair amount of roofing tear itself off a house in long strips, and in my anxiety, it looked like the long claws of something trying to crawl over the buildings, using the wind as its scream, which was all it took to send me scrambling back inside.

So imagine my surprise, and more than a little dread, when I heard that vicious wail of a whirlwind again. This time I wasn’t standing on a street corner — I was sitting in a movie theater watching the latest iteration of GODZILLA, as Gareth Edwards slowly turned Big G from a nuclear allegory into an all-too-real manifestation of the extreme weather occurrences that had been hammering our planet for the better part of a decade at that point. 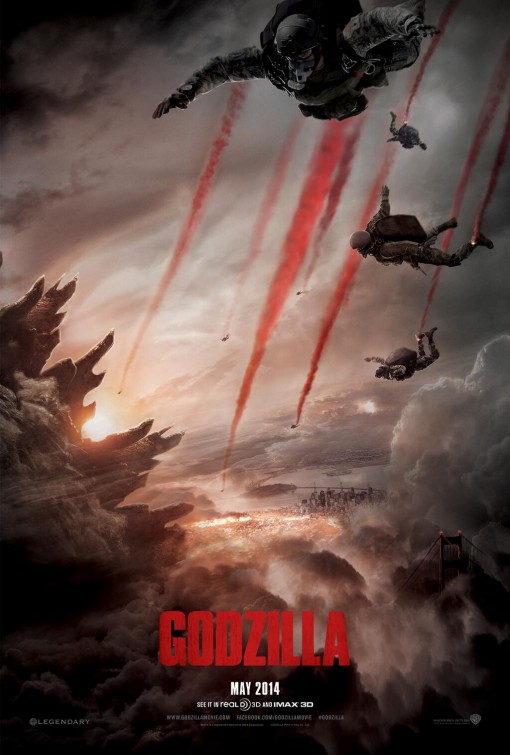 It’s a smart move. A kaiju slugfest is all well and good, but in order to properly re-contextualize the GODZILLA mythos, Edwards and screenwriter Max Borenstein (among many, many others) had to make GODZILLA and his monstrous brethren represent something other than an outdated fear of atomic weaponry. Almost from the moment the new millennium arrived, practically every nation on the planet has been hammered by natural disasters and aggressive weather aggravated by climate change, so much so that the damn stuff would almost seem actively malicious if we didn’t know better. Earthquakes in India (2001) and China (2008), Hurricane Katrina, Haiti in 2010 and even this month, the Indian Ocean tsunami of 2004, constant California wildfires, and the one-two punch of Japan’s earthquake-typhoon in 2011 have instilled a lot of fear into the human subconscious over the years. And that fear is exactly what Edwards tapped into with this film, and as much as the film is about monsters, it’s equally a story about the worst kind of natural disaster, and how human beings deal with it.

Japan’s 2011 disaster, in particular the Fukushima nuclear disaster, is important, and you can tell it was at the forefront of the filmmakers’ minds as they basically make it the film’s prologue. Here the nuclear plant collapsing isn’t caused by a typhoon, but by a newly revived burrowing parasite, one that causes the deaths of hundreds, including the wife and mother of the films main protagonists, Joe Brody (Bryan Cranston) and his son Ford (Aaron Taylor-Johnson). Jumping ahead fifteen years after that loss, we start to get a picture of these two men as sketches of what happens to people after surviving a disaster. Ford has joined the armed forces as a explosive ordinance disposal officer, possibly to muscle in some kind of control over the destructive forces that shaped his childhood, and he seems to have built a solid home life with his young son and his wife Elle (Elizabeth Olsen). Joe, on the other hand, has not found that kind of balance, and seems to have slipped over to the shallow parts of sanity, having convinced himself that something else happened to destroy the plant. He has obsessively devoted himself to finding out what happened, which in turn puts considerable stain on his relationship with his son Ford. This is where casting makes a big impact, since few actors can play a shattered man the way Bryan Cranston can, and in the scenes following, where the two Brodys return to their old home, Cranston really sells the pain of returning to a place that has been one thing in their minds, but one that has been ravaged by time. And when Joe finds out he was right all along, and that something more malevolent than an earthquake is responsible for the remains of his life, his bubbling anger at the political forces that hid it from him have a righteous fury that’ll be familiar to anyone who’s sustained loss in the wake of a combination of disaster and government neglect. You look forward to him being given the chance to look that destroyer right in the eye.

So it was kind of a shock that he’s killed off just as its getting good.

It’s one of those things: I can’t really figure out if this was a smart move or not. On one hand, I think Edwards was going for a sense of the abruptness of death when natural disasters arise, but on the other, this plot twist also takes away the only real compelling lead of the film. Once Joe is gone, we are presented with a lot of disparate perspectives that are kind of hit-or-miss. If there’s a problem with any of the characterizations of the characters we follow, it’s that everyone just kind of rolls with the fact that giant monsters just exist now. Taylor-Johnson’s kind of positioned as an everyman character, but due to his military background, the filmmakers don’t really allow him to show his process of dealing with the death of his father, let alone the fact that giant walking disaster areas now exist. The closest we come is with Ken Watanabe and Sally Hawkins, who play covert scientist characters being in minor wonder of these monsters, and Olsen’s character, who is stuck in the role of bystander-on-the-street. There are good bits throughout the film, but unfortunately it never reaches the same emotional high as it did during the scenes with Cranston. Thankfully, what GODZILLA might lose with character, it gains with a doubling-down on imagery.

At this point, I’ll acknowledge that for a film called GODZILLA, I have spent a lot of time on the human elements up to this point, and that’s because I truly believe that the mark of any good monster movie is how it handles the people under their feet, as much as the beasts doing the stomping. Compared to Toho’s extensive library of kaiju films, the MUTOs aren’t super-distinctive, but a more 21st-century monster you’re not likely to get. Sleek, with an almost mechanical design, they also have the abilities to unleash EMPs, which are a nice stand in for how the worst disasters can take down our most advanced resources with almost comical ease. Due to their bulletproof skin, the military are further neutralized by the MUTOs’ ability, and lead to a real feeling of frustration when all your prep goes out the window. The MUTOs serve their purpose — they’re monstrous enough to negate any empathy, and with their swallowing-up-whole of radiation, they are breeding more creatures with the same abilities.

Compared to them GODZILLA is basically the equivalent of a controlled burn. Of all the subjects discussed so far, the order of nature is right up there. The MUTOs are representations of the last decade, events that feel like unnatural occurrences which leave destruction in their wake. Godzilla himself, though, is a natural component of the earth. He theoretically causes just as much damage as the MUTOs do, but his actions are more of a glancing act. Storms are going to form no matter what we do on our planet, but his are the kind that might leave some healing and renewal after the worst of it is over.

In the final fight of the film, the city of San Francisco is leveled — the fighting, and the way Edwards shoots it, are the most artful parts of the film. Once Big G makes landfall, it’s on, and the city becomes a cinder pit of rumble, dust, and smoke. In probably the definitive scene of the whole film, a group of Special Forces soldiers (including Ford) do a halo jump into what was once San Francisco’s Chinatown, and as they fall into what’s effectively a roiling storm, they fall past the two monsters battling it out, hoping not to get swatted out of the sky.

Look, as my tone has probably made clear, I don’t think this iteration of GODZILLA is a perfect film. To be honest, I don’t think any of the GODZILLA movies are perfect films, but at their best, they manage to take the fears of the elements that might kill us all and give them physical form, and this one does that. Its combination of tactile filmmaking and its commitment to realism manage to create the same sense of dread from our current trend in natural disasters just as the original did for the dangers of nuclear weapons. The only difference is that unlike the original, which had a monster killed by equally-destructive science, here we have a monster that allows the world to slip back into its natural order. It’s an order that will still have its share of destruction, but instead of eternally hanging above us, it’ll give us the chance to rebuild stronger. As the final shot of the film unfolds,  GODZILLA manages to show us that although a storm might roil and rage, it ultimately leads us to a place much more peaceful than what came before.