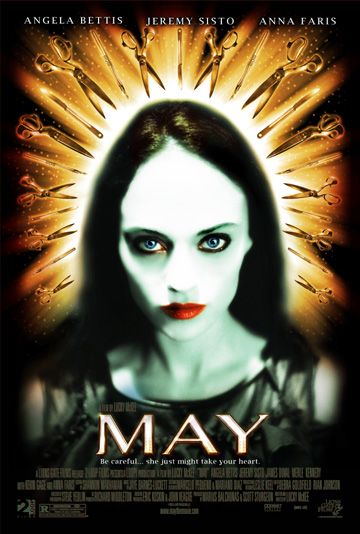 This article contains mild spoilers for MAY.

Despite its climactic scenes taking place on Halloween night, MAY, while undoubtedly a horror film, is not considered a Halloween film. But ’tis the season when even the people who claim they “don’t like scary movies” dip a toe in the horror pool. With that in mind, I wanted to spotlight a film that I feel is under-appreciated by both general audiences and many horror film aficionados. After all, while HALLOWEEN is a great film and TRICK R’ TREAT is a fun ode to the holiday, you need more horror in your cinematic diet than just those mainstays.

Centering on the titular character (Angela Bettis), MAY has been described as everything from a deadpan dark comedy to a feminist horror film to a modern take on FRANKENSTEIN. In truth, it is all of those films put together, but if you will pardon a cliché and a pun on the film’s ending, the whole of MAY is greater than the sum of its parts.

May Canady grew up a lonely misfit. In brief flashback scenes, writer/director Lucky McKee establishes how May was ostracized as a child. Forced to wear an eyepatch to correct a lazy eye and raised by an uptight mother who gives the horrible advice, “if you can’t find a friend, make one” when presenting her with an antique doll named Suzy that cannot be removed from her glass case, May inevitably grows into an awkward young woman with no real connection to anyone else.

Now in her early 20’s, May works days as a veterinarian’s assistant. A talented seamstress, she spends her evenings making her own clothes. She talks to Suzy — who is still in her case — while she sews, about her failed attempts to connect with people who are put off by her combination of a mousy demeanor and forthright way of saying exactly what is on her mind, no matter how inappropriate it might be for the occasion. Her most recent story for Suzy involves spotting Adam (Jeremy Sisto), an auto body repairman who works across the street from her veterinary clinic. May tells Suzy that Adam is not like other boys she has come across because she likes all parts of him—but especially likes his hands.

In one of the only times that I can think of in a horror film, it is the female lead who is sexually objectifying people. Not only does May focus in on Adam’s hands, she obsesses about the long, shapely neck of lesbian co-worker Polly (Anna Faris), the pinup-worthy legs of Polly’s cold girlfriend Ambrosia (Nichole Hiltz), and the arms of an oddball stranger (James Duval, playing the most James Duvalish character he has ever taken on). As May states late in the film, after several people have disappointed her, “so many pretty parts, none pretty wholes.” It is worth noting she says this while watching strangers walk by, staring at their individual body parts like someone window-shopping.

It turns out that Adam is a fairly approachable guy with the swarthy charm of early ’70s Elliot Gould. He seems to enjoy May’s awkward attitude, waving off her concerns when she describes herself as “weird” with the assertion, “I like weird.” Adam is quick to share his affinity for Dario Argento films with May and shows her the student film he has directed (which is as goofy, pretentious, and thematically on-the-nose as every student film ever made). But when May unleashes her pent-up sexual desires on Adam in moves that escalate in aggression, he balks and pulls away telling her she is weird. When she states the obvious: “You like weird,” his answer underlines what turns out to have been his bullshit posturing: “Not that weird.”

Reeling from rejection by the first person she ever kissed — and very nearly had sex with — May accepts Polly’s advances only to find that no matter the gender, she is only viewed as the weird girl who is pretty enough to only be desirable for a one-night-stand. Confused and slightly ashamed, May finally starts to crack. She argues with Suzy, eventually locking the doll away in a closet. She tries to get her life on track by volunteering with a daycare center, assisting with a group of blind children, but that bit of public service ends badly, sending May all the way into a tailspin that leads her to desperate actions with bloody consequences.

MAY plays with the idea of the monster and who creates it. I would never go so far as to call May a monster, but she has quite a bit in common with Frankenstein’s creation (and any number of sympathetic, yet deadly, horror protagonists). A combination of bad luck (the lazy eye that led to her lonely childhood) and a bad parent (her mother) led her to become the emotionally unbalanced and awkward young woman we follow through the movie. Unleashed into an uncaring world that does not understand her but that she desperately wants to belong to, her building sense of betrayal and rage is understandable and frightening. When the third act rolls around and she literally takes on the role of the mad doctor, stitching together her creation, May has become the flip side of the archetype, but instead of the audience losing sympathy for her, she simply becomes even more tragic.

If this all sounds like an experience in misery, trust me, it is not. McKee drops in several moments of humor that lets the audience laugh with May as she regales a grossed-out Adam —professed lover of Argento films — with gory stories of pet surgeries gone wrong or listens with deadpan sincerity to the absurd tale a dog owner tells her about coming home from vacation to find his dog was missing a leg. May is awkward and eventually revealed to be unbalanced, but McKee never laughs at her and that is important in the way it maintains balance between the film’s conflicting tones of horror, comedy, and painful coming-of-age tropes.

Bettis’ performance also helps keep the film walking a tonal tightrope. In a better world, MAY would have made Bettis a star. May is the kind of lead role that should launch a career. Instead, Bettis receded into a career of TV guest spots and character roles in indie films. If anything, Bettis is too good as May, committing fully to her cracked soul and mousy insecurity. The phrase “disappears into the role” is overused when talking about performers taking on physical transformations, but Bettis really does disappear. May’s third act transition into a predatory force is made all the more surprising by Bettis’ natural beauty as she changes from the awkward young woman we have come to know to a gorgeous avenging angel.

It would be easy to view MAY as simply a movie about a woman who snaps and kills people who betrayed her. If anything, McKee is giving the audience the story behind that simplistic logline, explaining how May, Adam, and everyone else who gets hurt got to that end point with empathy for all the characters involved.

That empathy does not stop McKee from taking Adam to task for viewing May as only a “quirky” young woman who he can mold into someone closer to the mate he is looking for. By the time of their last meeting, it is clear that Adam barely saw May as anything other than a construct of a character instead of a woman who needed serious psychiatric help and not lessons in horror film directors and how to smoke cigarettes. That may not make him a complete asshole, but it does make him self-centered and more than a little dense. Whether or not he deserves his fate is a tricky question to answer, but that is just part of the beauty of MAY. There are no easy answers when it comes to ending a relationship with someone who sees their future with you.

It may never be considered a Halloween classic, but the image of May, decked out in her costume, pulling a bloodstained cooler behind her while trick-or-treaters look on in admiration, is an image that is burned into my brain. MAY is a flat out great movie that deserves a bigger audience. Watch it, even if it is not Halloween. It is a film that sticks with you long after it is over.