MANDY is a Rob Zombie abortion played at 16 rpm. Nicolas Cage is Human Troma. The entire thing adds up to “The Complete Idiot’s Guide to Misappropriating Jodorowsky.”

Such was my original MANDY takeaway. I now think I gave it too much credit.

Rather, MANDY is the product of our on-demand, give-me-ONLY-what-I-want-right-now modern existence.

There’s no conflict, nothing unexpected, not a single frame that’s not minutely calculated to tickle its audience — an online army whose members have already decided MANDY will strengthen their personal “brand.”

And a major (salable) aspect of that branding is Nostalgia For Someone Else’s Nostalgia. Hence MANDY’s brazenly trumpeted, but otherwise entirely unnecessary, 1983 setting (“Hey! All the crap I buy at cons comes from an era I roughly understand as ‘1983’! That’s so DOPE!”).

Consider the rest of MANDY’s “hits:”

The on-screen credit announcement of “Hey! Look at the cool title song we paid for!”

All these measured and tailored “treats” simply pile up to ignite serotonin drips in the vein of how the brain reacts to Instagram “likes.” 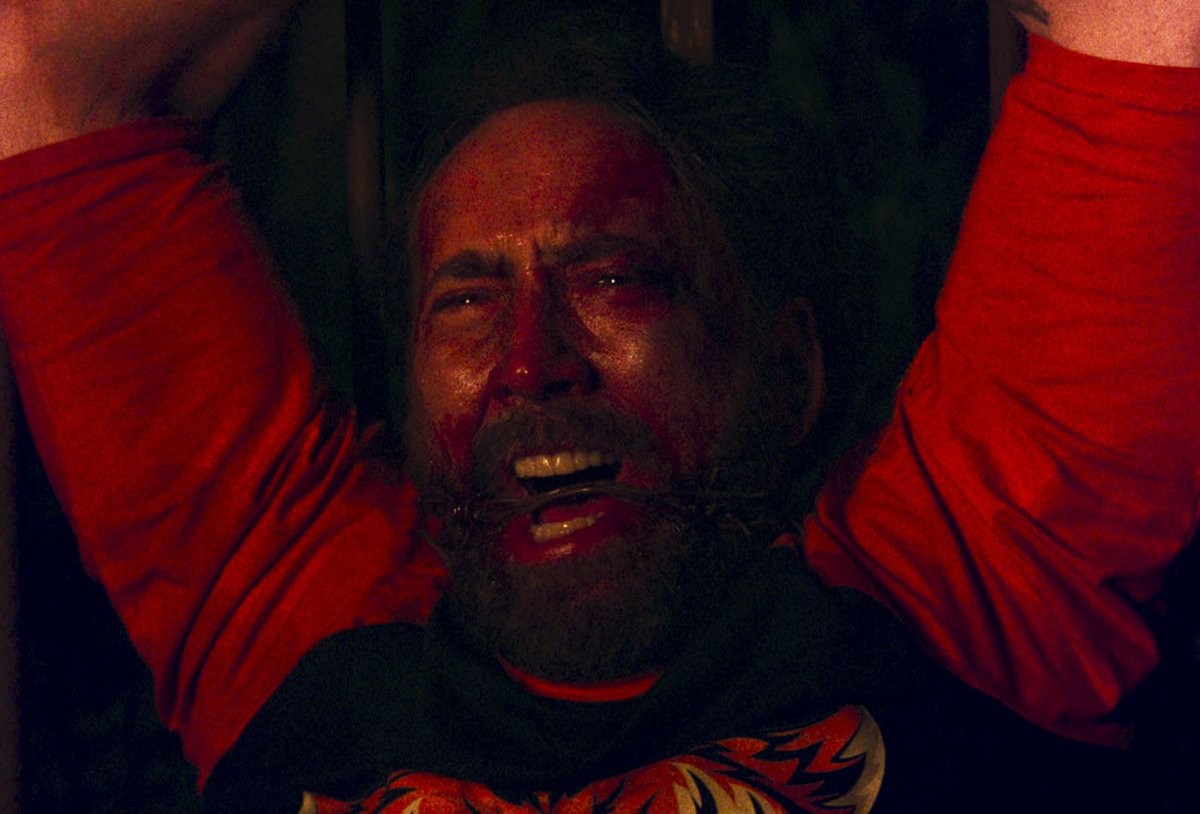 Big case in point: Nicolas Cage decapitates an enemy who’s on fire. He then spots a discarded cigarette on the ground nearby. OH, BOY!! What do you think Ol’ Nic does next? Yes, he lights the cig from the flaming head, inhales, and puffs out through a smile in close-up, thereby cueing the audience to LOVE IT!!!

That moment, like every other moment in MANDY, happens EXACTLY like the audience knew it would. It couldn’t happen any other way.

The Pavlovian set-up and effect is akin to how that same audience never has to experience a song, an image, an opinion, or even a word now that in any manner deviates from their exact desire at that exact moment.

MANDY is an algorithmically preprogrammed sensation delivery system. It’s a streaming file. It’s a YouTube clip. It’s Approved Thought and Language, devoid of any threat or deviation, filed under “BAD ASS” and “BEAUTIFUL” and “NICOLAS CAGE IS THE MAN!!!”

As with MAD MAX: FURY ROAD and THE SHAPE OF WATER — two other allegedly beloved big empties with which I imagine MANDY shares a huge amount of admirers — nothing happens to challenge the course set by the movie’s capsule description. It wouldn’t dare.

The question, initially posed by New York Magazine’s great David Edelstein in reaction to the last Johnny Depp PIRATES rehash, is this: “Do you go to the movies to be surprised or to NOT be surprised?”

MANDY — or, more specifically, the love of MANDY — proves that in the territories where surprises used to abound (art freak-outs, extreme horror), the audience has opted instead to emulate the crowds at a PIRATES OF THE CARIBBEAN sequel.

At this point, that itself should come as no surprise.