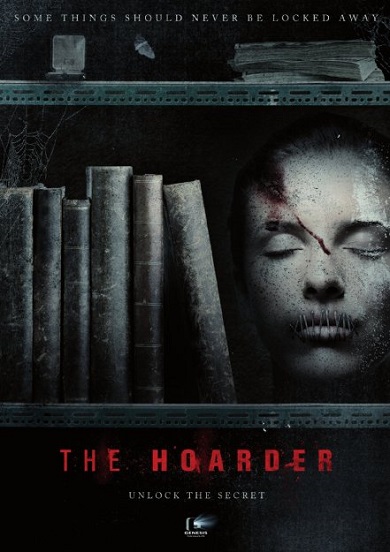 Let’s be honest — there’s something inherently creepy about those mini-storage places. They’re big, cavernous, concrete tombs where people store the detritus of their lives — shit that they probably could just as well get rid of, but don’t have the time or inclination to part with for whatever reason. Most of us have entirely too much stuff, it’s true, but whatever happened to having a garage sale once in awhile to shed some of our excess baggage? I’m all for sentimentality, but seriously — if things are getting to the point where your possessions are crowding out your living space, it’s time to take a good, hard look at whether or not you own your things or they own you.

Indie horror director Matt Winn takes this trope to its logical conclusion in his just-released straight-to-video number THE HOARDER, and adds an entirely logical wrinkle — what if somebody was storing away not just old dishes and unwanted Christmas gifts, but people?

His titular hoarder, then, isn’t so much a serial killer as he is a serial collector, but that doesn’t mean that he isn’t piling up a copious number of victims — only that he’s keeping ’em alive, whether they like it or not. And given that he’s stapling their mouths shut and keeping them in a huge, hermetically-sealed storage unit where they’re locked in iron cells and fed with some kind of IV drip, my best guess is that death would come as a welcome relief to most, if not all, of them.

One of the nice things about this well-plotted little low-budgeter is how expertly Winn and his co-screenwriters, James Handel and Chris Denne, have spread out their story and character beats to achieve maximum bang for their buck. First we meet our ostensible heroine, Ella (played by Mischa Barton), who suspects that her fiancee is concealing evidence of his fooling around in his mini-storage locker. Or so she claims, at any rate. Enlisting her petty-thief friend, Molly (Emily Atack) in her quest to uncover the truth, they gain access to the rental facility just minutes prior to closing time thanks to the entirely understandable “who gives a fuck?” attitude of the attendant on what passes for “duty” (Andrew Buckley), and soon find themselves locked in after hours with Vince (Robert Knepper), an off-duty homicide detective;, a homeless guy living out of his locker named Rashid (Richard Sumitro); Willow, (Valene Kane) a stereotypical space-case “new-ager”; and Ian (John Sackville) and Sarah (Charlotte Salt), a divorcing couple who are divvying up their stuff and generally at each other’s throats at all times.

They’ve almost all got secrets, of course, and perhaps none are bigger than the one Ella is concealing herself, but when it turns out that they’re quite clearly not alone by any stretch of the imagination, they’ve all got to decide, to one degree or another, whether or not they’re going to let their respective pasts drag down their chances of escape, or just forget it and get the hell out of there while they still have open mouths to scream from. It’s a nifty premise, well-executed thanks to some taut and atmospheric direction on Winn’s part, that has the added weight of posing some truly worthwhile philosophical questions. In short, THE HOARDER is both smart and suspenseful, a combination that is, sadly, all too rare these days.

A certain amount of good, old-fashioned suspension of disbelief is required here, of course : I have my doubts as to whether or not our collector could get away with this for any extended period of time, as well as how long anyone would stay alive after being subjected to his — uhhhmmmm — “modifications,” but whatever. When a film excels as much as this one does at creating an overall “vibe” of fear and dread, I’m prepared to let certain gaps of logic (even sizable ones) slide. So take that, all you readers who feel like I’m consistently “too tough” on things.

Other flaws are a little more difficult to forgive — the identity of the creep behind all this shit should be fairly obvious to anyone paying even a passing degree of attention and Barton’s acting is far too one-dimensional and wooden to carry as much of the load as she’s asked to (although she’d be great at commercial voice-over work and everyone else does anywhere from a good to a terrific job with their parts, particularly the always-undervalued Knepper) — but even they don’t detract too much from an otherwise surprisingly-strong production that balances genuine character development with its well-timed shocks in a ratio as near to perfect as I’ve seen from the DTV ranks in quite some time.

In the spirit of full disclosure I feel compelled to point out here that RLJ Entertainment, who’s handling this film’s DVD release, hooked me up with a free preview copy of the disc (the only extra on offer being a reasonably interesting “making-of” featurette), but this is actually a film I’d pay to add to my — all right, I admit it! — ever-growing collection, as I have no doubt that I’ll enjoy watching it again every so often over the years. It’s nothing like a modern-day horror classic, but it’s better than 90% of the other scare flicks hitting so-called “home viewing platforms” these days and if you give it a go, I think you’ll be very glad that you did. I certainly don’t foresee myself selling it off in a garage sale or sealing it away in a box for storage.