After a beautifully produced set of opening credits featuring a woman drowning in blood, THE EVIL IN US starts out with a tired horror-movie premise: A group of six young adult friends go off to a remote location, the stereotypical “cabin in the woods,” for the Fourth of July holiday to party. Unfortunately, the debut director Jason William Lee doesn’t ascend much from that point, in terms of avoiding cliches or offering anything new to the genre. All the characters are completely unlikeable, teasing each other, getting high and drunk, and cheating on each other, so we won’t mind seeing them picked off one by one in gory fashion later. When the film devolves into cannibalism, the blood-red eyes of the characters as well as their overall transformation into growling, flesh-eating zombies also seem typical, as does their failed attempt to reach anyone to communicate their need for help. There are even a few dangerous cliches, such as choosing John Wheeler (Ian Collins), the one character of color, as the first to transform, as well as putting him on the anti-psychotic lithium. 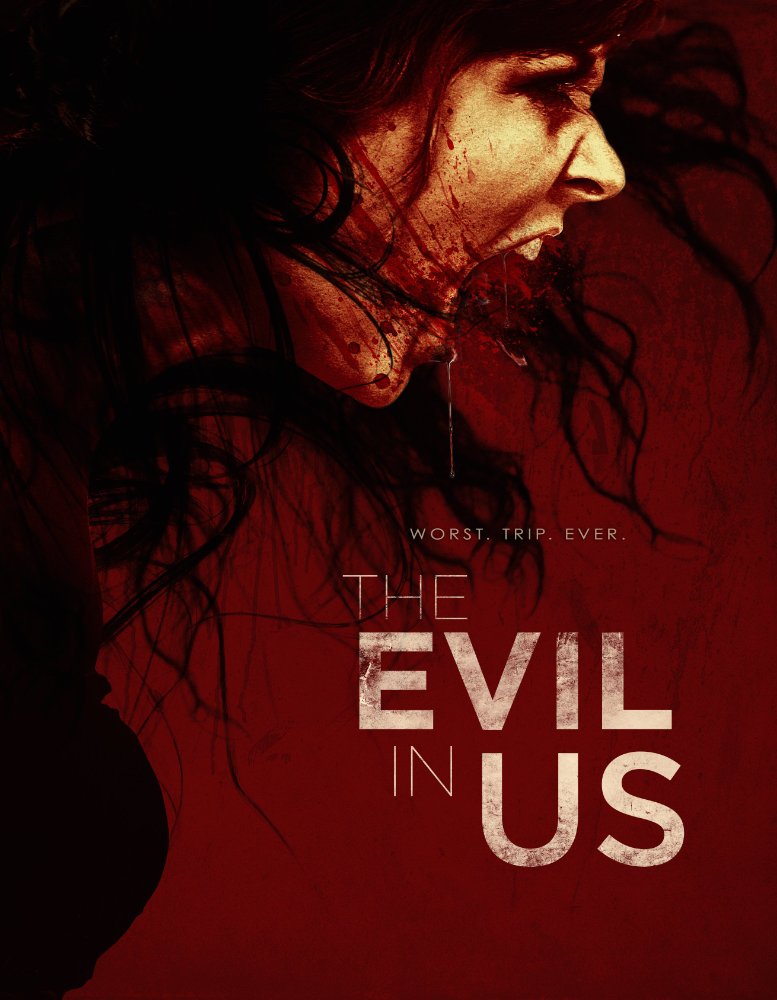 The one new conceit the film has to add to the equation is that the taste for human flesh is caused by a bio-active drug that spreads a virus, and that drug is transferred through cocaine the friends spread around. Only Brie (Debs Howard), who doesn’t try the drug, manages to escape the virus and ends up defending herself from her bloodthirsty former friends. News reports on the virus and how it was intentionally spread by a covert Republican organization drain away a little mystery as well as slow the pace of the film. However, there is thematic potential there to compare drug usage to zombie-ism and maybe draw the conclusion that there is a bit of satire being drawn on the War on Drugs.

Most things about THE EVIL IN US are mediocre: the script falls victim to cliches as well as imitation of stronger films such as CABIN IN THE WOODS and 28 DAYS LATER. The unknown cast is mostly uninspired playing a group of obnoxious friends. Some of the acting as zombies even seems overdone and outright silly. The music is unmemorable and while the gore effects are decent for a low-budget indie, they’re not stellar and some gorehounds would complain that there is not enough of them and they take too long to truly get going. The idea that the virus is spread through intentionally manufactured drugs is ultimately not enough to save THE EVIL IN US from the realms of the tried-and-true and overdone. You can safely skip this one. 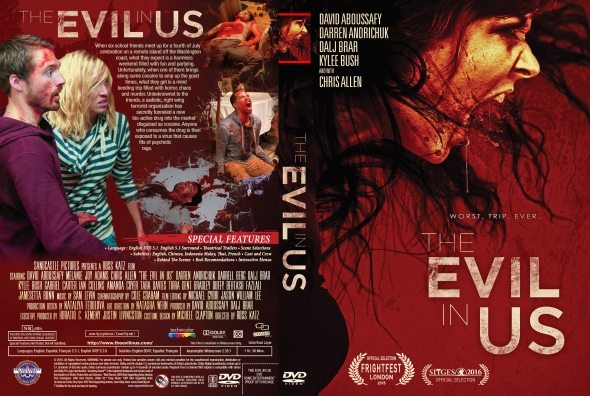 THE EVIL IN US will be released by RLJ Entertainment on DVD, VOD, and digital August 29, 2017.