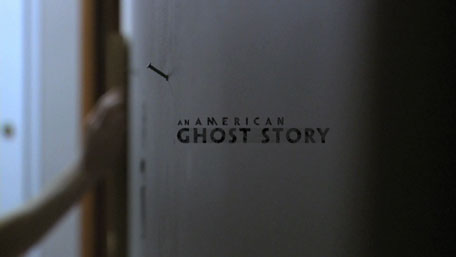 I’ll admit it, I’ve always been a sucker for a good ghost story. From a childhood spent reading “Scary Stories To Tell in the Dark”, to the more palpable pleasures of THE HAUNTING or THE SHINING, I’ve grown up with a healthy respect for sliding chairs, possessed psychopaths and things that go bump in the night.

But in recent years something has changed. Perhaps it’s the natural skepticism of age, or maybe I’ve just taken a more dismissive attitude towards the idea of the paranormal; but whatever it is, the spooky films of my youth are just not doing it for me. While I’m able to appreciate the craft that makes the PARANORMAL ACTIVITY series such a monster hit, I find the jump-scares and spookhouse tricks get a bit tiring. Still, few things can draw me into a film more than a persistent feeling of dread, and the best haunted house movies can create a pleasant anything-can-happen atmosphere that can melt even my frigid exterior. 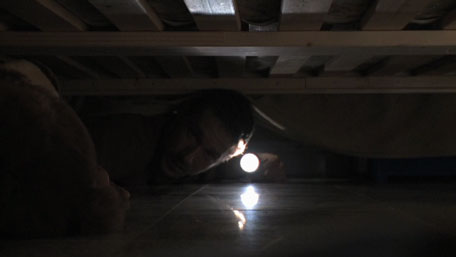 Obviously inspired by the success of recent spooky films, Derek Cole’s AN AMERICAN HORROR STORY takes an admirable stab at creating funhouse thrills on a budget, and gets more mileage out of a bedsheet than I would have thought possible. It’s also packed with scares, though often of the REALLY LOUD NOISE variety. It sometimes feels a bit cheap, but Cole (along with writer/star Stephen Twardokus) has some fun tricks up his sleeve, and it’s actually a bit refreshing to see a horror film that brings the frights while avoiding bloodshed entirely.

Twardokus plays Paul, a struggling writer who is hoping to encounter some paranormal activities after moving into a supposedly haunted house with his girlfriend Stella (Liesel Kopp). After a close encounter with some stacked chairs sends Stella packing, Paul is left to investigate the history of the house and its previous tenants – though he discovers that most are hesitant to reveal their own experiences. Increasingly frustrated by the mild nature of his own ghostly rendezvous, Paul attempts to goad the ghosts into making an appearance, but soon finds that he’s bitten off more than he can handle. 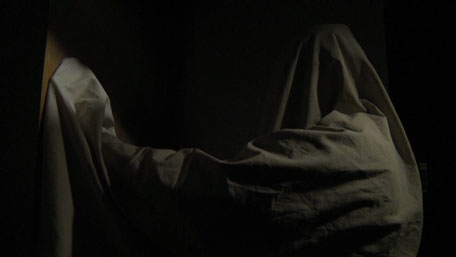 Obviously the plot is just a light framework on which to build increasingly intense set pieces, but in this case that’s not really a bad thing. Just as the PARANORMAL ACTIVITY films have audiences dreading the night, here Cole stages increasingly intense haunting sequences that prey on your imagination. While there’s little here to surprise ardent horror fans, there are few things more primally fulfilling than a shaking hand reaching for a white sheet – with no idea what could possibly be underneath. Unfortunately, these nighttime scenes start to get repetitive, and while Twardokus makes for a sympathetic lead, he never really seems in much danger outside of getting a fright. Thankfully Cole rights the ship in the final ten minutes with a bravura sequence that brings the whole thing to a satisfying close.

Since this is almost a one-man show, it’s a good thing that Twardokus – who looks sort of like Shia LaBouf’s taller brother – manages to elicit sympathy, even if his arc is a bit of a strange one. While his quest to write a book (to show that he can finish something he starts) is admirable, he does bring on much of the events of the film himself. He walks around his obviously (and visibly) haunted house with only a flashlight, and he seems unperturbed when his girlfriend leaves him – and vanishes for the rest of the film. Even the final confrontation happens as a result of him attempting to taunt the ghosts into revealing themselves. Our brief glimpse of the text he’s writing for the book looks less than impressive, so it’s just a bit difficult to accept Paul as someone obsessed with unlocking the secrets of the house.

The few supporting players are excellent, with Wendy Haines notable as the slightly unhinged Sue; a former tenant of the house who lost her family – and her mind – due to the meddling of ghosts. 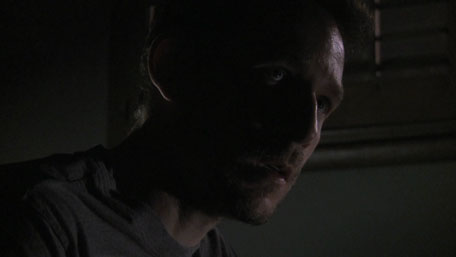 But, really, you’re here for the protracted haunting sequences, and they deliver thanks to a suitably spooky soundtrack and some very effective special effects. The traditional bed-sheet ghost might have you picturing Charlie Brown’s Halloween costume, but in the context of the film the white sheets are truly terrifying, and it’s a testament to both Cole and Twardokus that they are able to wring so much tension from an ostensibly silly concept. As I mentioned, a few too many scares are punctuated by loud bangs or sudden shrieks on the soundtrack, but it’s hard to complain when it’s paired with some well crafted fear-building.

Not for the faint of heart, AN AMERICAN HORROR STORY moves a bit slowly between the scares, but does a terrific job of building tension during its nighttime scenes. With some slick photography and a fine – if bland – performance at its center, the film does a good job of slowly building dread, before easing off on the tension just long enough for the audience to get – temporarily – comfortable. This pacing gets a bit exhausting, but thankfully things come to a satisfying head before a coda that promises more ghosts to come. While there’s nothing distinctly American about it, it’s a quality, effective ghost story that consistently delivers.