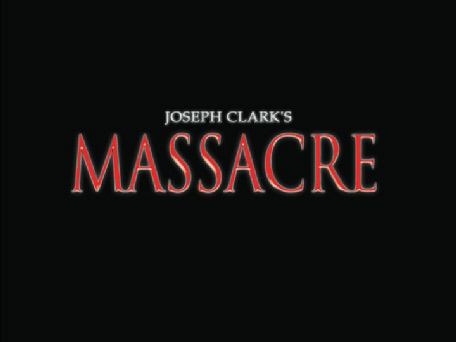 Remember the early 2000s? Come on. Think back. It was a more innocent time, when the Internet was a wild west of viruses, ignorance and pornography.

Hmm.. Maybe not much has really changed. But for film fans – particularly those who enjoy exploitation and genre movies – the early 2000s were marked by the popularity of last minute twists. You can probably blame the doubly-whammy of THE BLAIR WITCH PROJECT and THE SIXTH SENSE; both of which had final act surprises that left audiences buzzing. Nothing is quite as important in a film than nailing the ending, and both of those films took an imaginative approach to terror and paid things off with panache. We were left intrigued and shaken, and craved that feeling again.

And we got it. Sort of. Then came a slew of imitators, all trying to one-up the audaciousness of these endings. Was it a dream all along? Or was it in the mind of some twisted psychopath? Did the butler do it? Or maybe it was you, the audience, who were responsible. Remember IDENTITY, HIGH TENSION, STAY, SECRET WINDOW, or THE FORGOTTEN? M. Night Shyamalan was so fixated on last minute twists that it began to overwhelm his entire career; drowning out much of the pleasures inherent in THE VILLAGE and SIGNS. 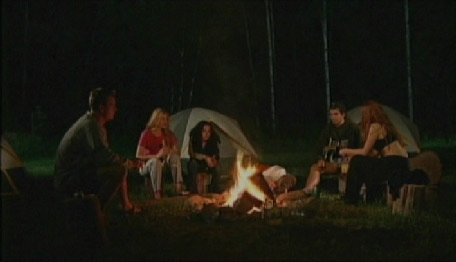 Joseph D. Clark’s BIKINI PARTY MASSACRE (also known simply – and more accurately – as Joseph D. Clark’s MASSACRE) has a doozy of a twist, but is so reliant on the shock value of its ending that everything that comes before generally feels like a waste of time. While the sheer cheekiness is enough to pull the film out of its consistent tailspin, it’s far too little and much too late. Even worse, it’s one of those twists that are more concerned with being shocking than being logical. Even a modicum of pondering will leave you with more questions than answers, and the sheer number of contradictions can’t help but leave the viewer frustrated.

Stop me if you’ve heard this one before. A group of friends head out to a remote camping spot to have a few drinks and blow off some steam. However, this good time is eventually interrupted by an unidentified killer who starts taking out each of the revelers in a variety of gory ways. Think THE BURNING or FRIDAY THE 13TH or any one of a dozen other slasher films. At first, MASSACRE appears to be following this boilerplate fairly closely, but it quickly strays in some significant – and baffling – ways. 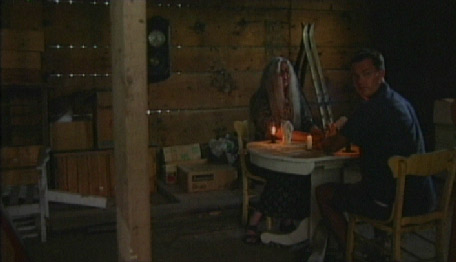 For one, the pacing is just interminable. Even in a terrible slasher film the initial set-up is usually out of the way in five or ten minutes, but MASSACRE has the trip to the campground take a full thirty minutes. THIRTY MINUTES. Considering that the closing credits hit at the 72 minute mark, that means almost half the film is just getting the characters to the location. This would be tolerable if those thirty minutes focused on character development or interesting dialogue, but we get two bizarre (and, in the face of the twist, nonsensical) dream sequences that go on for so long that they start to feel like a bad joke. Even worse is when the vehicle runs out of gas and driver Jeff (played by director Joseph D. Clark) finds himself at the house of a local medium who predicts darkness in his future. Honestly, the first half of this film is almost unwatchable.

Thankfully, things pick up a bit once they finally reach the campsite. We get some cheesecake nudity, a campfire scene with a shocking revelation and – finally – the massacre of the title. And when I say finally, I mean it. The film waits until the final ten minutes to stop fucking around, and we get down to some requisite impalings, decapitations and chainsaw evisceration before that pesky twist brings everything to a sudden, shocking halt. Like I said, it’s a pretty interesting turn – and puts some of the previous limitations in a different light – but is hardly enough to justify much of the tedium that leads up to it. 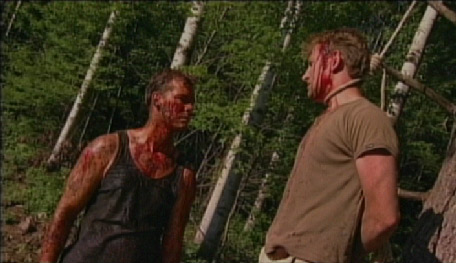 While the technical specs are competent, and the acting is passable, BIKINI PARTY MASSACRE is simply too slowly paced and lifeless to be even a decent time-waster. A few impressive visual effects in the final act compliment the unique twist nicely, but the excessive padding and unlikable characters make for an alternately frustrating and boring viewing experience. While there’s likely enough material in here to make an impressive twenty minute short film, the near feature-length run-time quickly becomes tiresome, and few viewers will be able to make it through the irritating first half. Unless you’re particularly curious about the film’s final turn, I’d recommend staying away.

Four Nightmares out of Five – Not Much Fun