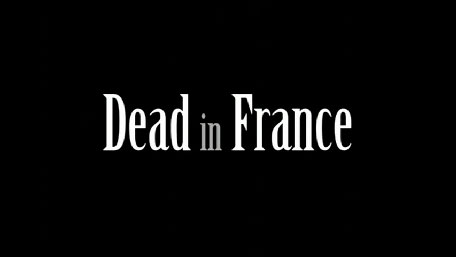 Here’s a blast from the past only.. not. It’s been a few years since the reformed gangster genre was all the rage, but you would hardly know it considering the enthusiastic violence of Kris McManus’ DEAD IN FRANCE which seems to have plucked a few cherries from Guy Ritchie’s garden, but manages to plow some fresh territory all the same. Filmed in stark black and white, the feature contains plenty of memorable compositions showing off the director’s accomplished photography background, but falters a bit due to some shaky performances and an over-reliance on profanity. Thankfully, the script (co-written by star Brian Levine) throws in enough fun characters and strange twists to keep things – just barely – on the rails.

Lonely hit-man Charles (Levine) dreams of leaving his brutal life behind and sailing away on a yacht, but when he falls for his newly-hired maid Lisa (Celia Muir) – and is promptly ripped off for two million quid – it appears that the quiet life may not be in the cards. Bodies quickly pile up thanks to Lisa’s nutty tattooed boyfriend Denny (Darren Bransford) and his ex-con friend Simon (Lee Cheney) – who spends his time attempting to earn the respect of his mother while dealing with his rapidly unraveling brother Ray. All the while, Charles is being hunted by fellow hit-person(?) Clancy, who is enraged that Charles is trying to leave the business.

While much of the advertising makes reference to Ritchie and Quentin Tarantino, DEAD IN FRANCE has more in common with the darkly comic GROSSE POINTE BLANK, with a bit of Coen brothers characterization in for good measure. The characters all have easily distinguishable quirks; Lisa’s sullen sweetness; Simon’s daddy issues; Ray’s propensity for violence, but the mayhem is tinged with plenty of humor – even opening with a Looney Tunes-ish fall from a cliff. It’s a tough tonal wire to walk, but the script does a fine job navigating the various twists and turns before an ending that unfortunately fizzles. Still, leading up to that are some of the film’s best moments, including Charles’ raucous assault on a mansion, which features the film’s most inspired acts of (CG-enhanced) violence.

Some might find Levine’s hound-dog performance as Charles to be a bit inappropriately lackadaisical, but I found his troubled lonely-heart approach to the role to be entirely endearing. More troubling is Darren Bransford as the unhinged Denny. He’s engaging while onscreen, but completely steamrolls his co-stars while soaking up way too much running time. Denny is a pretty one-note character, and a little goes a long way. Sadly, Kate Lousteau has one of the meatier roles, but her performance lacks some very necessary menace. The rest of the cast acquit themselves admirably; with Celia Muir giving a pleasant performance in a rather thankless role.

An attractive and surprisingly slick dark comedy, DEAD IN FRANCE doesn’t quite eclipse its stated influences, but still manages to remain engaging thanks to some lovely cinematography and an appealing lead performance. Outside of its unique Cannes location, it brings little new to the table, but what is here is a fun, violent diversion that shows that director Kris McManus can capably handle an ensemble. Worth your time.