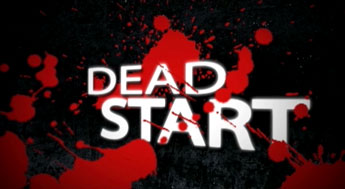 It’s a conversation I’ve had with friends a hundred times. The dead start returning to life in massive numbers; hungry for human flesh, soon overpowering cities by their sheer numbers. What is your response? How do you survive?

Sure, it’s a ridiculous idea. Shambling corpses filling the street are a pretty silly concern compared to real-life – and much more legitimate – worries like nuclear war, natural catastrophes, climate change, etc. But it appeals to a very powerful part of our minds. Our ability to create doomsday scenarios. Wondering how they might play out. And preparing ourselves to have the answers when the shit hits the fan. 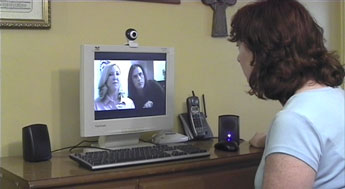 George Demick’s DEAD START takes the well worn zombie apocalypse story in a different direction from some of the more well known and loved zombie epics. While his debt to George Romero is obvious – Demick worked as Romero’s assistant on KNIGHTRIDERS and even appears as a zombie in DAY OF THE DEAD – this film is less interested in groups, and more interested in a single relationship – with a bit of media satire thrown in for good measure. Straying far away from the jokey, comedic zombie films of the last decade, DEAD START is dead serious, and instead of focusing on a group of young, attractive, capable people it uniquely follows a middle-aged couple as they desperately – even mundanely – have to deal with the end of the world. It’s a nihilistic tale that is sometimes hampered by its low budget, but tackles occasionally familiar material in an interesting and original way.

The film begins rather routinely (for a zombie film, at least). A restaurant is attacked by a shuffling corpse that bites one of the patrons, setting off what quickly becomes an epidemic that spreads across the United States. News broadcasts punctuate the national scope, with an impressive number of zombie extras providing a visible threat as we see reporters from around the country try to make sense of the tragedy. But all that is secondary to the story of Mark and Anne Savin, a middle-aged couple who initially treat the tragedy with disbelief and confusion, before the terrifying reality sinks in and they have to deal with the world they thought they knew collapsing around them. Neighbours, friends and family members slowly die off, many only voices on a phone or, in one memorable sequence, faces on a webcam. Faced with a mounting threat, they do what characters in these films never do.. they stay where they are. They fortify the doors and watch the news, trying to decide on the next step. They worry about their kids. They try to hold on to hope, even while the images on television get more hopeless and violent. In the end, they have to face the biggest decision of their lives. 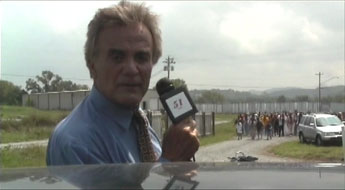 But it’s not all doom and gloom. While the film is generally played straight, the incessant news broadcasts occasionally bring a spark of levity – including an interview with a Max Brooks-like zombie survival expert, and numerous rather reprehensible reporters getting swarmed by throngs of the living dead. Perhaps the film’s most memorable scene features character actor Terry Kiser (best known for his role as Bernie in the WEEKEND AT BERNIES films) as a reporter who finds himself trapped in a car without his keys, surrounded by the living dead while the television camera’s batteries rapidly deplete. It’s a great scene, and features a truly memorable number of extras attacking.

Alas, Kiser’s small part sort of exemplifies how uneven the acting is from some of the other cast members, particularly the news anchors who lack both the diction and gravitas necessary to carry such large parts of the dramatic arc of the film. Much better are our two leads, particularly Linda Wylie as Anne Savin who becomes believably frantic at the mounting carnage around her. There’s something so real in her reactions, particularly in some of the film’s more dramatic moments, and while Chris Whitsett (as the husband Mark) has a few shaky moments, he gives her admirable support. I also want to give credit to the many, many zombie performers who generally nail the look and walk of the living dead, though perhaps Demick (and the make-up department) deserve some of the props. 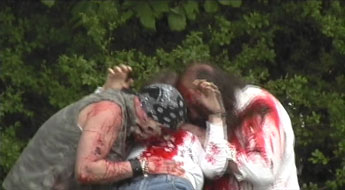 It might not answer the question of what to expect when you’re expecting zombies, but DEAD START creates a memorably apocalyptic tale on a budget, and shows that the zombie genre still has significant life left in it. The ambition sometimes outweighs the budget, but this is a massive step forward from the much more modest BURNING DEAD and tells an intimate story in the midst of a national (or even global) tragedy. It’s a story that would never have been told in a higher budget production, and it exemplifies what makes low-budget film-making so consistently exciting and interesting. George Demick may have waited a long time to fire off a zombie epic, but he made sure it was worth the wait.