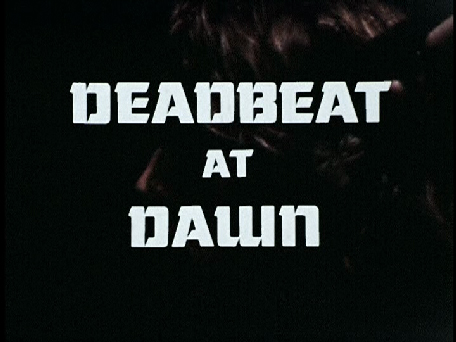 In 1988 I was eight years old. I subsisted entirely on sugary cereals, Teenage Mutant Ninja Turtles, pro-wrestling and THE MONSTER SQUAD. If you asked me at that time what the coolest things on the planet were, I would have said a) nunchucks b) throwing stars and c) massive brawls.

Jim Van Bebber turned 24 in 1988. He spent his University tuition (and four years) making the most bad-ass movie in the world. He took elements of THE WARRIORS, martial-arts films, AIP biker films, and 80s nihilism and turned it into something beautiful and entirely unique. And, most importantly, he made sure it featured a) nunchucks b) throwing stars and c) MASSIVE brawls.

DEADBEAT AT DAWN is “go for broke” film-making of the highest order; and features the director/star continually (and impressively) putting his body on the line to make a film that would stand the test of time. Twenty-five years later, it isn’t just a delicious slice of 80s cheese – though it’s certainly that – but remains a violent, brutal low-budget masterpiece by a truly visionary director. There’s never been anything quite like it. 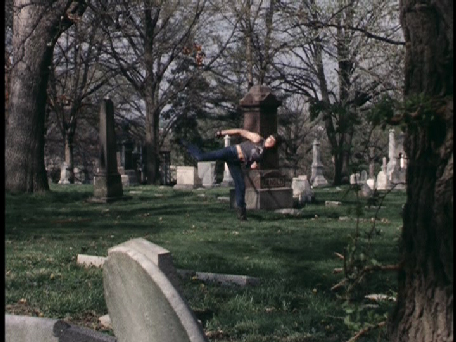 Van Bebber plays Goose, leader of The Ravens, an Ohio gang locked in a bloody feud with The Spiders – led by the ruthless (and dickish) Danny (Paul Harper). In fact, we’re introduced to Danny as he attempts to rape Goose’s girlfriend Christie (Megan Murphy), who was visiting a psychic out of concern for Goose’s safety. Yeah, she’s a bit of a wacko, but obviously cares deeply for Goose, and begs him to give up the gang lifestyle. At first reluctant, Goose eventually agrees, which leads to the vengeful Danny sending some goons to kill the pair- but they come upon Christie alone – gleefully murdering her and mutilating her corpse. A despondent Goose hits rock bottom, before a new leader of The Ravens (who have combined forces with The Spiders) approaches him to take part in one last big score.

The word you most often see in relation to DEADBEAT AT DAWN is “gritty”. The 16mm film is gritty. The surroundings are gritty. The action is gritty. Even Van Bebber’s face is a bit gritty. It’s a film that could easily have come from the 70s height of exploitation film-making, from the bright red blood to the kaleidoscopic transitions, but feels equally as situated in the midst of Reagan’s America. The characters are almost universally despicable, with the only difference between that the two gang leaders being that Goose has a smidgen of conscience and doesn’t act entirely out of self interest – but he’ll happily pummel a passer-by if he has a decent looking motorcycle. Aside from Christie (who has her own issues), every character we meet is reprehensible, violent and damaged. The world of DEADBEAT AT DAWN is a brutal one, and while Goose uses his martial arts arsenal to combat the violence of his everyday life, Christie is right to be wary of a lifestyle that involves regular bloody fights in the local cemetery. And while Goose (and, for that matter, Van Bebber) is impressively physical, he’s no Superman. The confrontations leave him battered and bloody. 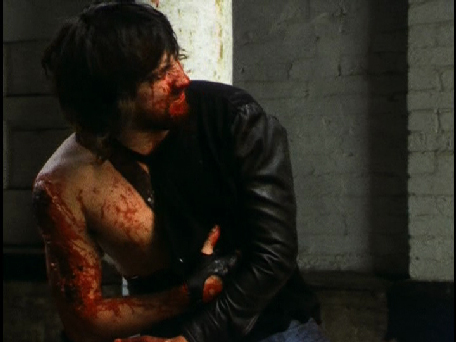 The grimy texture of DEADBEAT AT DAWN separates it from the slick action films of the 80s, veering much closer to the Bowery sleaze of Frank Henenlotter’s early films than the comic book polish of THE WARRIORS. Van Bebber films in front of porno shops and in alleys, staging some scenes in public – with onlookers appearing appropriately confused – and makes it seem realistic that a subculture of colorful, drugged-up, ninja-star wielding gang-members might be lurking in the cities of Ohio.  This is hard-hitting (and occasionally ludicrous) action, but it’s very street-level – even if it involves some death-defying moments. And those moments are brought to you by Van Bebber, himself, who lowers himself down parking garages, climbs up into abandoned buildings, drops into a quarry and risks his neck in a variety of impressive ways. While the action isn’t always masterfully choreographed or filmed, it has a sense of realism that makes every car crash, gun-shot or stabbing have an extra oomph.

Culminating in a flurry of chaos and violence, DEADBEAT AT DAWN is a masterpiece – a testament to what a committed, talented director can do when willing to put everything he has on the screen. It has awkward moments and a few lousy performances, but who cares? This is independent, punk film-making of the highest order, and has been justifiably lauded as a landmark 80s cult film. Low-budget cinema could use a lot more Jim Van Bebbers.

One Nightmare out of Five – No-Budget Perfection