I’m burned out on throw-backs. I’ve had enough of tributes. I can’t stand the idea of seeing one more no-budget slasher movie intentionally uglied-up with film grain, as the cast and crew slyly wink at the camera.

I understand why they happen. Microbudget directors wear their hearts – and influences – on their sleeves. The reason they started making films in the first place is because of a great love for genre films, and in their mind all it really takes to make a FRIDAY THE 13TH or HALLOWEEN imitation is a guy in a mask, a wooded area or suburban house, and plenty of fake blood to toss around. Inevitably, the final result is usually derivative, messy and just plain dull.

Which is really why Joe Hendrick’s DITCH DAY MASSACRE is so refreshing. While flooded with many of the cliches and tropes of classic slasher films, it still manages to add an entertaining twist to the genre without relying on becoming tiresomely postmodern. Sure, it has a nigh-unkillable protagonist; a group of sex-hungry teens; and a slowly mounting body count, but it’s careful to add some dimension to its main characters, and Hendrick takes great glee in subverting audience expectations. While it’s strictly out of the “killer takes revenge” playbook, viewers might find themselves sympathizing with both antagonist and protagonist. 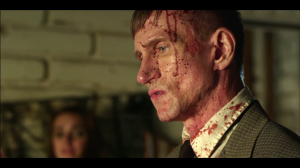 Jenny Bilson (Katy Foley) is a straight-laced high school student with a secret.  Two years ago she was the responsible for the deaths of a mother and her young daughter after driving home from a party drunk, and her father – a police officer – was able to cover up the whole thing. In fact, Jenny doesn’t even know about the deaths, and is trying desperately to forget what happened. But, her crime is about to haunt her in a big way. The victim’s husband/father (the always incredible Bill Oberst Jr.) is coming to get revenge, and he happens to drop by on the very day when Jenny is skipping school to have a party with some friends.

It’s a predictable framework, and Jenny’s friends embody the usual archetypes, but the dialogue is sharp and the relationship between the characters is believable. They might look a bit old to be high school students, but the interactions between Jenny are her boyfriend Mike (Zach Silverman) are sweet, and even Jenny’s parents (her father is played by HATE CRIME‘s Greg Depetro) have some dimension to them. 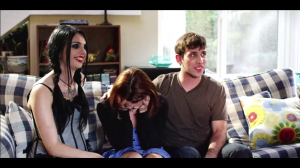 But this is really the Bill Oberst show, and his precise, apple-munching performance is what the entire film rests on. Not only is the intense actor an impressive physical presence, but he’s also entirely believable as someone thoroughly tortured by his own grief. There’s nothing humorous or amusing about his quest for revenge; it’s simply something he has to do before he can join the rest of his family in death. Oberst excels at these sort of tormented characters, but what’s most surprising is his ability to maintain a small amount of audience sympathy – even as he begins dispatching his victims in increasingly gruesome ways. It’s a wonderful performance, and a great character.

The rest of the cast is comparatively – and appropriately – bland, though we do get a nice appearance by the always-welcome Lynn Lowry as a desperate housewife, and
Zach Silverman does a fine job as the sleepy-eyed Mike. Katy Foley is believably guilt-ridden in the lead, but unfortunately never really gets an opportunity to fight back against her tormentor. Instead we get a particularly weak performance by Tara Gerard as a police officer who takes charge in the final act. I do want to mention the comically gruff performance from Brad Potts as the grizzled police chief who helped Jenny’s father cover up her accident. He’s so wonderfully tightly-wound, and the late confrontation between him and Oberst’s Vick is a highlight. 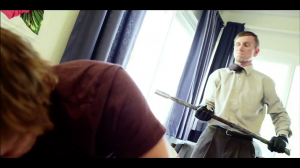 An excellent, polished stalk-and-slash film with quality acting and a few original twists, DITCH DAY MASSACRE is a refreshing change of pace in a genre that can so often be exhaustively incestuous. With an excellent performance at its core and solid production values, Joe Hendrick is able to conduct the action with a sure and confident hand. While it’s unlikely to convert those wholly disillusioned by the slasher genre, fans are going to find a lot to enjoy. Great fun all around.