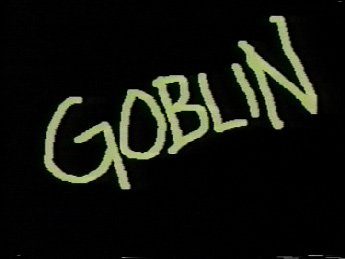 I owe a lot to Todd Sheets.

Like a lot of readers of Daily Grindhouse, I used to run a blog where I reviewed cult and genre films. It was really just a small site where I could have a permanent record of my thoughts on cinema, and – even better – it gave me an excuse to watch all sorts of reprehensible junk. It was here that my love of ultra low-budget and no-budget film-making really started to develop, but it was an encounter with Todd Sheets that really kicked off my interest in the “hows” and “whys” of these under-funded (and under-appreciated) films.

It all started with my first encounter with a Sheets film – the legendary NIGHTMARE ASYLUM. This was back in 2009, and I hadn’t yet developed my appreciation for the difficulties of shot-on-VHS features, or my affection for Sheets’ impressive oeuvre and impact on other low-budget directors. I ripped it apart with aplomb, poking fun at its sloppy production values, non-existent script and amateurish acting. And then something funny happened. Todd Sheets himself wandered upon the review, and wrote me a very respectable, very kind e-mail explaining some of the difficulties involved with making it, and how the film didn’t reflect his abilities some 15 years later. 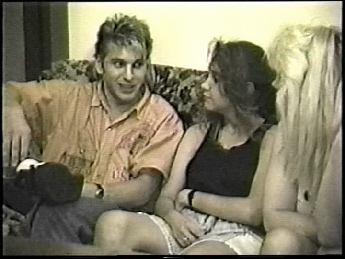 We wrote a few e-mails back and forth, and it was during that conversation that something really clicked into place. NIGHTMARE ASYLUM, PREHISTORIC BIMBOS IN ARMAGEDDON CITY, ZOMBIE RAMPAGE and – of course – GOBLIN are more than just low-budget, amateurish films. They are symbolic of a DIY, punk attitude towards film-making that took lovers of genre films, and put them in the driver’s seat. In 1993, an inexperienced young director without film school experience wasn’t going to waltz into a hundred thousand dollar budget – so why not recreate the sorts of films you love with what was available? Todd Sheets had a camera. He had access to editing equipment. He had a cast of friends and acquaintances who, while unreliable at times, would work for nothing. But most of all he had ambition and a willingness to push through the many obstacles he was to encounter.

Talking to Sheets now, he describes his experience on ZOMBIE RAMPAGE as a “nightmare”, and watching it reflects many of those difficulties. But it’s a finished, full-length film with a plot. It got actual distribution. And people are still talking about it 25 years later.

And I bring this up because GOBLIN is a film that Sheets has entirely disowned. When asked about it, he’s immediately – and reasonably – dismissive. This is a guy who is in the process of making his first film in nearly a decade. He understandably doesn’t want people to repeatedly bring up his connection with some of the “worst” and most incomprehensible horror films ever made. But Todd, and other early no-budget directors, have nothing to be ashamed of. When I watch films like GOBLIN, I’ll gladly poke a bit of fun at the weak costume of the titular character, the various plot-holes, or the baffling ending (which looks like it was slapped on from an entirely different film); but it’s with a recognition that the final result is still a massive accomplishment. A feature film. A horror film. With plenty of gore, original music, and tons of original ideas.

It’s not great cinema, but it’s symbolic of an attitude that many – myself included – have been incredibly inspired by. 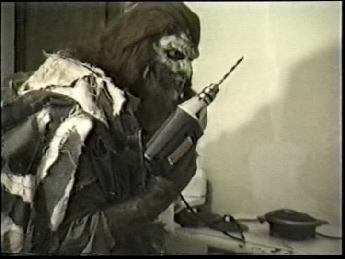 GOBLIN is a difficult film to describe. Sure, it involves a group of young people all getting together at a house, before inevitably being stalked and slashed by some malevolent creature. But while core elements resemble plenty of other horror films, the actual content is like nothing you’ve ever seen. The goblin was brought forward accidentally by a farmer who was attempting to use white magic to save his crops, but he instead called upon a murderous trickster who looks like a cast-off from GWAR and has an affinity for handling organ meat. The goblin went on a killing spree, before being walled up in an abandoned well. Flash forward years later, and the creature is released when the boards are pried off by the new house-owners. The creature then starts killing randomly throughout the neighborhood, before a neighbor (with a connection to the goblin’s original imprisonment) reveals the secret to finishing off the creature for good: opening up its chest cavity and shoving in an ancient necklace. If you’re hoping this involves a circular saw and a can-do attitude, then you’re in luck! The monster is eventually dispatched for good, but.. then…

There’s plenty of strange material in GOBLIN. The occasionally choppy editing makes continuity difficult to follow, and the audio can occasionally be impossible to interpret. But it’s all simplistic enough to stay with until the very end. I’m guessing that with the film running extremely short, Sheets realized that some extra material had to be added to fill things out (long time readers might remember I was involved in a similar situation when filming ROCK, PAPER, SCISSORS: FALL OF THE ORIGINAL SIX). First, he added a lengthy scene featuring himself as a “hitchhiker”, who wanders around some seemingly empty houses before being attacked and killed by the monster. But the bulk of this filler material comes at the end, where zombies are introduced, characters suddenly look entirely different, and all of our main characters are immediately dispatched of. Sheets overdubs his voice in an attempt to connect what we’re seeing to the previous plot, but it simply makes things more delightfully maddening and insane. It’s an appropriately random, bat-shit way to end things, though definitely a head-scratcher. 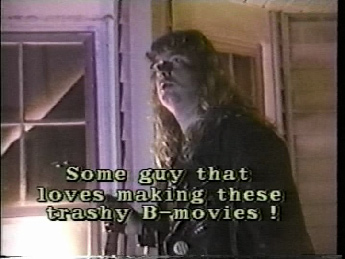 I won’t go into much detail about the production itself. If you’ve seen Sheets’ films from this time period, you know what to expect; references to Lucio Fulci and THE EVIL DEAD, music by Enochian Key (with Sheets on vocals), snippets of Gustav Holst’s “Mars, the Bringer of War”, and plenty of ridiculous dialogue delivered by Sheets’ friends (and whoever else might have been available). But it’s a lot of fun, and features plenty of rather innovative violence – including a vagina stabbing that will make cautious viewers wince. It all looks incredibly messy, but it’s all in good fun; it just requires patience, and a willingness to go with the flow.

We’ve referred to Sheets as the “Pope” of No-Budget Nightmares (with our mascot being, of course, the Suburban Sasquatch), but it’s not meant to be an insult. There’s a reason that the films of Todd Sheets have developed a fandom all their own; it’s because when you look past the latex and fake blood there’s a passionate film-maker devoted to using all he has to entertain his audience. GOBLIN might not be the most coherent or attractive horror film, but it’s full of passion and enthusiasm, and is rarely boring. After a recent health scare, 2013 will bring the return of Todd Sheets with his upcoming HOUSE OF FORBIDDEN SECRETS. With any luck, his new film will wipe away the stain of these early films, so even Sheets himself can appreciate them as the enduring pieces of inspiration that they are.

? Nightmares out of Five – TODD SHEETS!