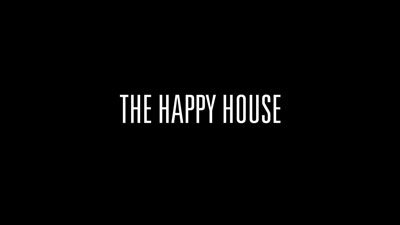 You could be forgiven for expecting that D.W. Young’s new horror/comedy THE HAPPY HOUSE was going to be packed with dark humor in the vein of films like DEAD AND BREAKFAST or MOTEL HELL. After all, when you hear about a horror film set at a bed and breakfast, certain expectations come to mind. Perhaps it will have a seemingly kindly owner who is actually a murderous psychopath? Or, perhaps the owner will have a hulking, half-wit, beast of a son who carries out the dirty work? Certainly there will be an array of guests who will start vanishing one by one. Young recognizes these expectations and subverts them at every turn, instead focusing on a collection of damaged, realistically drawn characters who are drawn together by location – and, eventually, by tragic circumstances.

It’s actually a bit unfortunate that most of our time is spent with Joe and Wendy (Khan Baykal and Aya Cash), a rather unlikable couple who initially take an aloof view of the quaint and restrained Happy House B&B run by the kind Hildie (a wonderful Marceline Hugot) and her son Skip (Mike Houston). Constantly bickering, the couple start to suspect that something is amiss when the location’s only other guest, Swedish lepidopterist Hverven (Oliver Henzler), goes missing. There’s also the matter of an escaped psychopath on the loose in the area, and once Hildie’s sister Linda (Kathleen McNenny) comes to visit, we have all the pieces in place for a terrifying confrontation. 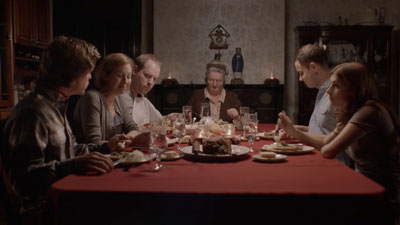 Which makes it all sound a bit scarier than it actually is. In fact, 3/4 of the film is a sweet, occasionally funny character study of a bunch of disparate, occasionally prickly folks who are forced to temporarily live together. Young even takes time to focus on the banality of their situation, and things slow to a very intentional crawl at the half-way mark, before the truly bizarre inclusion of a crazed slasher villain switches the tone entirely in the final twenty minutes.

The reason the film works up to that point is due to some smart writing and a collection of wonderful performances, none better than Marceline Hugot (unforgettable as Kathy Geiss on 30 ROCK), who brings an equal amount of sweetness and menace to a role that could have so easily devolved into cliche. It’s rare enough to see a person of faith and simplicity portrayed so sympathetically, and what could have been a cartoon character is given real depth as more details are given about her family’s background. The entire cast is rock solid, but Hugot is a step above – and her character is the one that ends up resonating.

While much of the action takes place in the single location, Young does a wonderful job making it feel immense in the early scenes, while slowly getting more claustrophobic once the stalking begins in the final act. This eventual transition to a more horrific tone doesn’t quite work, and the serial killer subplot sometimes feels like it’s taken from an entirely different movie. It’s exacerbated thanks to a bloodless and choppily edited climax that manages to be both confusing and slightly unsatisfying, and some final moments that lack resonance.

A unique melding of light comedy and dark suspense, THE HAPPY HOUSE is a pleasant and likable film that does a better job developing its wonderful cast of characters than handling its killer-on-the-loose climax. It soars when D.W. Young focuses on playing with his audiences’ expectations, but holding off the horror never quite pays off like it should. Still, some terrific performances and strong pacing keeps things from flying off the rails.