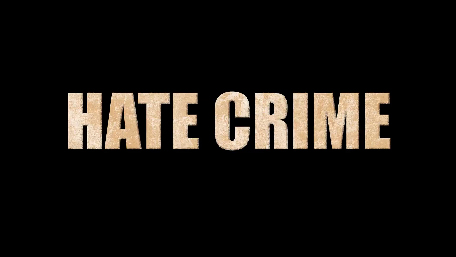 Watching James Cullen Bressack’s HATE CRIME is a thoroughly unpleasant experience, and that’s by design. As the title implies, it’s an extremely hateful film – full of racial slurs, emotional trauma and sexual violence; and it’s obviously designed to provoke a strong negative response in the audience. The found footage element – as is often the case – is occasionally gimmicky, but also a way of putting the audience directly in the middle of the consistently reprehensible actions of the antagonists. Like the terrified family, you want to look away but you can’t. The hysteria can’t possibly sustain itself for the entirety of the film’s brief 73 minutes, but despite a few false moments, this is a film that will linger with you.

The found footage comes from a camcorder, which begins by filming the birthday party for young Alex (Sloane Morgan Siegel), before the household is invaded by a group of three sadistic neo-nazis. The family, composed of Alex; his brother Tyler (Nicholas Clark), sister Lindsaw (Maggie Wagner) and his bickering mother and father (Maggie Wagner and Greg Depetro) are Jewish, and while the nazis (who call themselves One, Two and Three) are initially just supposed to scare the family out of the neighborhood, a shocking early murder bring events to an entirely different – and more violent – level. Fueled by hatred and cocaine, the three psychos torture and abuse the family members – even while the surviving members try desperately to turn the tables. 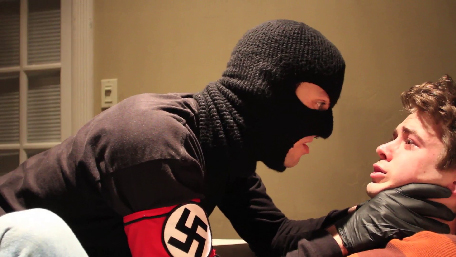 The first person POV camera has been used and abused extensively over the last decade, and while there are plenty of overly convenient moments in HATE CRIME, the conceit generally works due to the unhinged nature of the attackers and the choice to portray most of the events in real time. Edits are covered fairly well – usually with a character grabbing the lens of the camera – and the amount of planning that must have went into putting the film together is admirable. The constantly shaking camera will emit the usual cries of motion sickness, but that’s the least of the sickness you have to worry about here.

That the film is able to sustain its early momentum at all is due to the brave, startling performances. This is not traditional horror movie acting, as artifice gets wiped away early by the family members wails of distress and grief, and the attackers manic, coke-fueled mania. This isn’t LAST HOUSE ON THE LEFT or FIGHT FOR YOUR LIFE where the sadism builds to a furious release of revenge. In HATE CRIME we’re meant to wallow in it. All of the energy comes from the three attackers, particularly from musclebound Three (played by Ian Roberts) who is surprisingly nuanced in his batshit craziness; particularly in the final thirty minutes where he almost reverts into acting like a massive, drugged up child. But all the performances are great, with the family members experiencing unbelievable amounts of abuse – and often living what must have been horribly uncomfortable sexual situations. 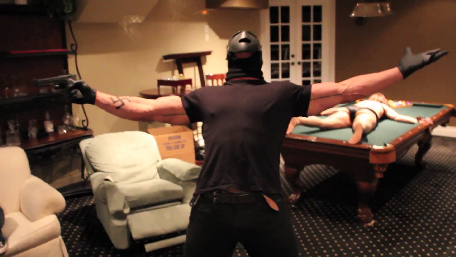 Despite its low-budget origins, HATE CRIME has a much different feel than the micro-budget films often featured in this column. Acting, special effects, choreography.. everything is working on a heightened level, and the amount of planning that had to go into pulling this off is a testament to the commitment the filmmakers had to making a professional looking product. While the text that ends the film doesn’t quite feel earned (and is presented in a slightly cheesy manner), it does at least suggest that Bresseck (along with co-writer Jarret Cohen) had more in mind than just presenting as much objectionable material as possible.

Not for sensitive viewers, HATE CRIME is as thoroughly repulsive a film as I’ve seen in recent memory, but is presented with such conviction by the actors – and such commitment by the film-makers – that I at least had to respect the audacity it took to put this out in the first place. Many of the usual complaints about found footage films apply here, but in its best moments it brings to mind the haunting videotape home-assault scene from HENRY: PORTRAIT OF A SERIAL KILLER. It’s similarly fearless, even if you’ll definitely want to take a bath afterwards.