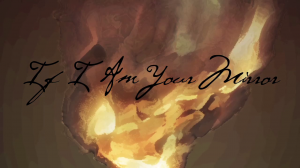 Developed as director Garrett DeHart’s thesis project, IF I AM YOUR MIRROR takes a nightmarish look at the psychological breakdown of a civil war soldier, presented in very unique, semi-rotoscoped style reminiscent of Richard Linklater’s WAKING LIFE. Short on dialogue, but long on brooding atmosphere, the twenty minute short was influenced by the work of Edgar Allen Poe – “The Tell-Tale Heart” in particular – as well as Romantic painters of the mid 19th century, but there are also elements that feel pulled from some of the darker Spaghetti Westerns. It’s a bleak, violent tale told with immense style and anchored on a near-silent, nuanced performance by the late Larry Holden (MEMENTO, BATMAN BEGINS).

At first I’ll admit to finding the visual style a bit off-putting, but it allows the low-budget production to feature some shockingly accomplished set pieces – the Civil War scenes in particular – though the occasional strange change of perspective, or a character seemingly floating in space, betray some of the more grounded moments. But this is a film that revels in its flexible reality, and the intentionally jumbled timeline kept me riveted to the final frames. Despite its short length, the production values – particularly some astounding cinematography from Steven Swiggart – are polished and impressive. A huge accomplishment, and a fine debut by DeHart.