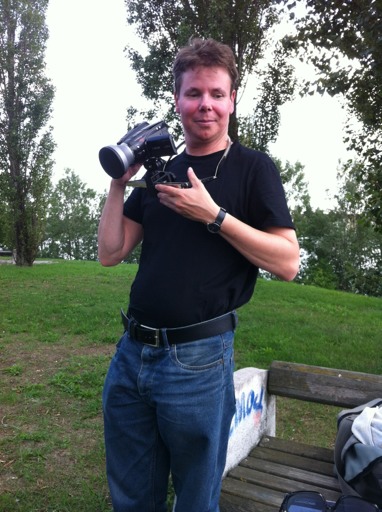 Sweetback (SB): To begin, I’m actually just looking for a bit of clarification. Your IMDB page lists BLOOD CITY MASSACRE, as well as MAD DOG CRADY and MASSACRE IN VIENNA. All three films seem to have the same cast playing the same characters, but MAD DOG CRADY and MASSACRE IN VIENNA are listed as shorts. I just wanted to get a sense of how they differ from one another.

Robert Tarantino (RT): I always cut short film version from my feature films, in this case it were two. So I can send my films to feature and short film festivals.

MASSACRE IN VIENNA is the ultra-short version, I cut out everything down to not even 12 minutes. It has only the lesbian love scene, the meeting with Susan (but shorter), Dr. Stevens and his appearance in the basement and the final showdown with Johnson, Stone and Crady in it.

MAD DOG CRADY: I cut out the scenes in the woods, only the last scene when Tanner and Johnson find the house is in. I cut out some dialoges between Crady and Agent Stone in the basement And this version is a bit more action-driven.

SB: I’ve found your list of directorial influences to be rather fascinating. Mixing the almost maniacally detail-oriented work of Coppola and Orson Welles with the prolific, ultra low-budget work of Scott Shaw and Donald G. Jackson. Talk a little bit about how you developed your love of film, and how these directors personally influenced you.

RT:I developed my love for film in my early childhood. My mother never had time for me because she was working so she turned on the TV and said: Watch TV and so I did.

I still love Orson Welles CITIZEN KANE but my favourite movie from him is THE TRIAL based on the Franz Kafka book. The camera angles, the photography, the acting, Orson Welles directing and of course the story have always fascinated me. The film I am currently working on, LOST IN VIENNA, is very much influenced by this film.

Coppolas APOCALYPSE NOW and RUMBLE FISH to me are some of the best films ever made. I love especially the camera work on both films, the story and the broken lead characters.

My first film WILD REBEL is a tribute to Rumble Fish. It even had the rebel/Cop confrontation.

I came around the Donald G. Jackson/Scott Shaw production THE ROLLER BLADE 7 because I’m a huge fan of actor William Smith and he is in many of Jackson’s films. THE ROLLER BLADE 7  had a huge influence to my own work and so have most of the films of Don Jackson. I love his weird sense of humour and his funny dialogues. VAMPIRE CITY and VAMPIRE CITY 2 have a lot of this humour and the “What’s in it for me?” line from Scott Shaw. Jackson and Shaw’s message was: grab your camera, go out and do it! And here I am doing it.

SB: At the risk of seeming uncultured, are there difficulties in finding english-speaking actors and actresses in Austria to feature in your films? And by having English as the primary language of your films, does it limit your audience in Austria?

RT: I really have actors on the set sometimes who do not speak English, especially elder ones, so I have to feed them the lines word per word. It is much easier with younger actors and actresses because most of them here grow up multilingual. And in the film I am currently working on, LOST IN VIENNA, I have a few American actors, who live in Vienna.

In Austria I show the films with German subtitles but the fact that I make films that are very much influenced by American Films do limit my audience here in Austria.

SB: While there are plenty of directors who have been influenced by the work of Ed Wood, I’ve never encountered another director who has found his own Tor Johnson. How did you meet (pro wrestler) Humungus, and what is he like to work with?

RT: That was really funny. I was working on my first VAMPIRE CITY film and was sitting in a bar in Vienna where my Vampire Queen Biggie Waite works as waitress to discuss a scene with her when the guy who sat next to me asked me if I needed some fight scenes for my film.

That guy was Humungus. He’s a great guy and always funny to work with that’s why I have him in all of my films since then. And the fact that he really looks a bit like Ed-Wood actor Tor Johnson lead to his part as Chief Inspector Clay in VAMPIRE CITY 2: ROCK’N ROLL ZOMBIES FROM OUTER SPACE.

Bye the way: In my Vampire Queen Biggie Waite I have also found someone who looks a bit like Ed-Wood actress Vampira.

SB: Your IMDB bio mentions that you learned your craft by simply going out and doing it. What were some of the biggest hurdles you had to tackle when making your first film WILD REBEL?

RT: Nobody believed that I could make this film. Everyone said: That’s impossible. (That’s what they always say in Vienna.) And they asked me why I’d shoot a film in English here in Austria. But I really wanted to make this film. I had read so many books about filmmaking and watched so many DVD Making of’s, especially Robert Rodriguez’s ones. In his book “Rebel Without A Crew” he describes how he shot his first film – and he himself was the whole crew. That really fascinated me and I wanted to see if I could do it, too.

On the first day of my first outdoor shot a hurricane came up and ruined my camera equipment so I had to shoot with a cheap camcorder. Supporting actors came for one day on the set and never came back, an elder actress had troubles to remembering her lines even in a love scene. She couldn’t remember the words: Mhm, ah, yeah. That’s good!

It was hard but I tried to make the best out of it and completed it. It was my very first film and it is full of mistakes, editing mistakes, directing mistakes but I learned a lot from making it and I’m glad that I made the film.

SB: You obviously have a great love for American films, and genre films in particular. Are there Austrian directors that you’ve found particularly inspiring?

RT: The only Austrian director I really find inspiring is Peter Patzak He had a TV series in the 70ies and 80ies called “Kottan”, a weird over-the-top crime comedy with a lead character who performed playback in every episode a few songs from Elvis and other classics from the 50s, 60s and 70s. Imagine “Sledge Hammer” with some musical elements.

But I don’t like the typical “Sad and depressing Austrian movies”. They just bore me because nothing ever happens in these films. They were just made to satisfy the ego of the director. I prefer American Independent Films because most of them are made with a real passion.

SB: You wear a lot of hats on your sets – actor, writer, director, editor, etc. Is there one role that you enjoy more than the rest, and are there any that you find particularly tedious?

RT: I love all parts in making my films. From the script to the filming, the editing and sound composing, I really love it. That’s my greatest passion! And I work for free. I don’t cost myself anything. That is why most of my films are really made with no budget.

SB: In the few years you’ve been making films, you’ve already been quite prolific. Is that a pace you hope to continue? Is the hope to continue to make ultra low-budget projects shot quickly, or is the aim to eventually move up to higher budgets and longer production times?

RT: My aim is to move up to higher budgets and longer production times. My new film now has a longer production time. I started to film on July 19th and I will shoot the last scenes in winter. For this film I have a small budget now so I could buy a good equipment, filters, gels and lenses to make it look more like a film.

SB: How long was filming on BLOOD CITY MASSACRE? Also, and I have to ask this, what happened to the Kim and Danny characters in the film? They sort of just vanish after being introduced.

RT: It took 4 weeks of filming BLOOD CITY MASSACRE. It took so long because a documentary team was filming the making of and also did some interviews with my cast and crew and myself.

Kim and Danny? I had to do this because the actor who played Danny was disappointed that we were just a small crew and that we had not a huge catering service for a two-and-a-half hour shot in the woods, just some croissants and ice tea so he disappeared on the next day. This happens sometimes. In his case it was strange because he came from Germany to Vienna to be in this film.

Their vanishing is explained in one scene when Susan appears and Freddy asks her “Where are Kim and Danny?” and Susan says: “They are all dead.” So in this special case it would have made no sense to bring back the actress who played Kim.

SB: Can you talk about what projects you have on the horizon? What are you currently working on?

RT: I am currently working on my next project LOST IN VIENNA, which is a mixture between the films of David Lynch and Orson Welles THE TRIAL. It will be a mystery drama. Julia Prock-Schauer, who played Kim in BLOOD CITY MASSACRE, is the female lead, Humungus will also be in it.

And I have a few other scripts completed with many action scenes but I really need some money to make a film out of them. And I also hope to have some American “name” actors and actresses in my films some day because I’m a huge fan of them and I follow all of their work.

SB: For those interested in following the progress of your work, or looking to purchase copies of your films, what would be the best way to do so? (This is where you can include social networking links, website links, etc)

RT: People who would like to follow my work can “Like” the Blood City Massacre Facebook page or can get in touch with me on Facebook. I’m there as Wolf Morrison, also if they want to buy copies of my films they can message me there.

My films are all available on DVD for a fair price.

SB: Anything else to plug or promote?

RT: Here are the links to the Trailers of my Vampire City Films:

SB: And finally.. what advice do you have for young or inexperienced film-makers who are just starting out?

RT: My advice for young filmmakers is: