Home  ⁄  The Wire  ⁄  NO-BUDGET NIGHTMARES: INTERVIEW WITH IF I AM YOUR MIRROR DIRECTOR GARRETT DEHART
Oct 17, 2012 No Budget Nightmares Feature Articles Comments 1 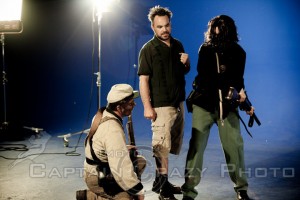 Sweetback (SB): Let’s jump right into IF I AM YOUR MIRROR. How early in the process of developing it did you decide that you were going to try and try and imitate the aesthetic of 19th century paintings, and was there an initial concern that it might come off as cheesy or garish?

It was a combination of a lot of things really. I love animation and I love to tell stories, but I don’t really have any money. I thought I can
create my own worlds here on my computer and I don’t need the huge budgets necessary with locations, and actors and crew. And on top of that I can create a very stylized, subjective world that would be incredibly difficult and expensive to create in a live action setting.

I had also been reading a lot of Poe and was thinking that it might be interesting to try and depict a story inspired by Poe’s narrative through the lens of the techniques and style that painters of his time might have used. So I already had the paint technique but the colors and the contrasts and the composition were really derived and inspired by 19th century romantic painting.

SB: Even aside from the visual stylings, this is an incredibly ambitious film – covering massive Civil War scenes, and often explicit violence. What sort of budget were you working with, and what were some of the ways you made the most of your means to bring these ideas to life?

GD: Yeah, the method really enabled us to create a much bigger film than I would ever be able to do in live action without a budget. The final budget of the film came in around $5000. Some of that went to offset Larry’s cost of traveling across country and spending a week with us. Most of that budget went to food for that cast and crew and to wardrobe. I took a lot of trips to the local thrift stores picking up garbage bags full of “era appropriate” clothing that we might be able to use.

A friend introduced me to a friend of her’s who was a civil war re-enactor here in Georgia. I contacted him and he was incredibly generous in
donating the use of all of his wardrobe and props, and getting some other re-enactors excited about the project to come out and shoot with us. I spent a couple of days shooting at some actual re-enactments on site as well. Those shots are the only live action elements in the film that were not shot in the blue screen studio.

As the budget was low, we needed to make a very small cast look like an army and a city population. I think we had 15 people to shoot the crowd at the gallows scene at the end of the film. We would shoot a group together and then have them all change wardrobe and move them around a bit and shoot them again. I layered those shots to create the crowds at the gallows.

The locations are all animated. So we didn’t have to worry about lighting huge spaces, or renting a train, or a train station.

SB: IF I AM YOUR MIRROR is dedicated to its star, the late Larry Holden. Talk a little bit about how Larry came onboard, and what his participation meant for the project.

GD: Larry was an amazing guy and a brilliant actor and filmmaker. I met him here in Atlanta in 2006 when we were both working on a small indie film. He went out of his way to help young artists and filmmakers in any way he could. We, or course, all love the Nolan films and having Larry on set certainly helped develop some early interest in our project. He was a wise sage on set and it was incredible for us all to have the chance to work with him and learn from him. It was incredibly upsetting to hear just a few months later that cancer had taken him.

SB: I’d love to learn a bit more about the post-production of the film. With so many elements layered together, plus the “painted” look, getting things to cohere to your specifications must have been a massive – and frustrating – undertaking. How long did this process take, and did you find the process a compromise – or were you generally able to get the look you wanted?

GD: The film took 2 years in post-production. It was a bit of learning process, and I got better at it, and developed faster processes as I went along. It crazy looking back now. After all was said and done I needed more than 6 terabytes of hard drive space to store everything. Each frame of each element in each shot had to be “painted” and then stored as a file. Those files were then all combined in After Effects and animated, then the shots were all edited together in Final Cut Pro. Many shots had hundreds of layers. I think at last count the final shot flying over the buildings have over 250 layers. That one took a bit of time to render.

I did all of the work on a Mac Book pro. It’s a work horse, it ran hard around the clock for over 2 years. I often had FCP, Photoshop, and After Effects all rendering out at the same time. That being said I think it would have gone a bit faster with an 8-core and 16G of RAM but you work with what you’ve got. And I think it’s very cool that I was able to create this product, by myself, entirely on a laptop.

As far as compromise, a film or any bit of art is never exactly what you want it to be, it’s just what you’re left with one you’ve decided to stop. After over 2 years on the project I was ready to stop and to move on to new projects. There are a few shots here and there that I wish were better. I few things I would have liked to be bigger. This was essentially an experiment as my thesis film for grad school, and it went a bit longer than I expected. I’m happy with the final product.

SB: You recently traveled to Ghana, Africa to document a student learning exchange. What did this experience involve, and what difficulties did you encounter filming in such a dramatically different culture and climate?

GD: I work at a local community college and took the Ghana trip to document the students educational journey. Ghana is amazing but, I’m not sure I was fully ready to document a trip like that. It’s hard to step out of being in an amazing location for the first time, and to actually work, and get all the shots you need. The country is beautiful and the people are amazing, but there is a poverty there that I hadn’t experienced in my previous travels.

It’s interesting that after working on post for over 2 years to create the 18 minutes of “If I Am Your Mirror”, for this project I had two weeks to edit 50 hrs of footage down to a feature film. So the final product is a bit sloppy, and is not really a film at all, but simply a travelogue of a college group trip. I’d really love to go back sometime and really work to tell some Ghanaian stories.
SB: What projects are you currently working on? For visitors looking to follow your future work, or check out IF I AM YOUR MIRROR, what’s the best way to do so?

GD: I’m reading scripts right now, while I’m finishing up a couple corporate projects. I’m looking to shoot something live action in the near future, as I think I need a break from animation for a bit. I’ve got my sights on shooting a feature in the next year or two. If you know folks with interesting scripts. I’d love to take a look at them. You can follow me at www.garrettdehart.com.

SB: What advice might you have for young or beginner film-makers trying to pursue ambitious, visually striking work on a low budget?

GD: Study great film, shoot constantly and never pass up the chance to work with someone who knows more than you do.