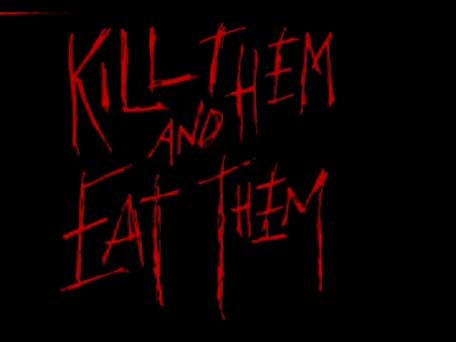 I’m a sucker for ambition. I love to see young film-makers throw everything they have into their work, even if it’s well beyond their abilities or budget. Sure, there’s something wonderful about a simple story told perfectly, but sometimes you just want to see someone go for the gusto. You might only ever get a single chance to make a movie, so why not make it one sustained burst of inspiration?

KILL THEM AND EAT THEM has more ambition than brains, and it comes very close to succeeding almost despite itself. Alas, its ambition is also its downfall, particularly when it comes to storytelling – where the film’s momentus plot constantly threatens to collapse on itself before imploding in a cloud of disappointment. Somehow, a tale of killer mutant creatures terrorizing a fascistic future society manages to be.. boring. There’s plenty of potential, and some judicious editing might have saved any number of overlong, plodding scenes; but the biggest issue is that the film simply tries to do too much – and fails at most of what it tries to do. 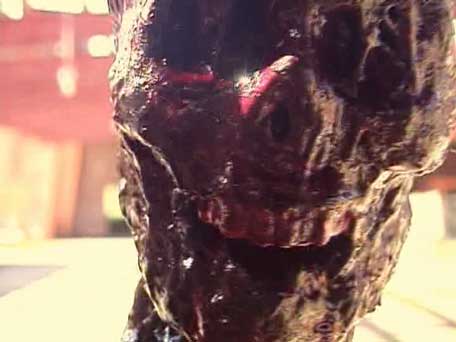 It certainly begins well enough, with a young guy awaking underneath an electrical tower and spotting what appears to be a vagrant walking up a nearby trail. After discovering the hobo is actually a HIDEOUS MUTANT FREAK, the unnamed (for now) guy is chased to a nearby foundry where he promptly has his face ripped off. This leads straight into some primo semi-animated opening credits with a bad-ass hard-rock song behind it. I’ll admit to being pumped for the 75 minutes that were yet to come.

Unfortunately, as things settle down post-credits a slew of characters are introduced which muddle what should be a fairly engaging plot. In this dystopian future, things are overwhelmingly controlled by a company known – simply – as The Company, and their genetic experiments on their employees (meant to make them more focused, loyal and productive) eventually led to the rebellion of their lead scientist Dr. Gore (actually Williams, but nick-names stick). He’s taken up with the evil Greg Tobias, Jr. (the very Canadian Richard Archer), and the pair have been kidnapping and experimenting on local citizens in an attempt to.. do something. I think it’s meant to counteract the mutations in company employees, but it all doesn’t make a ton of sense. 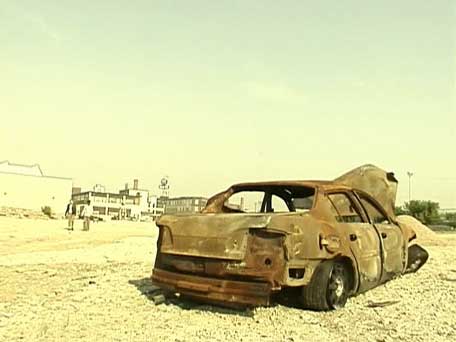 Meanwhile, Kellin (Francoise Snobel) and Milo (Hugh Gibson) are searching for their friend – apparently the guy who had his face ripped off at the beginning – but are quickly kidnapped by the creatures and doctors. We also have Velner (Will van der Zyl) and Aaron (Lloyd Cameron); two agents of the OFFICE OF COMPETITIONAL MONITORS (controlled by THE COMPANY) who trace the whereabouts of Dr. Gore through a discovered severed claw. All of these characters eventually mash together for an appropriately messy – though disappointing – climax, though their individual plots are confusing enough that you’ll probably be scratching your heads at that point.

While the scope is appropriately wide, and director Conall Pendergast knows how to keep his action contained in the frame, KILL THEM AND EAT THEM makes for a continually frustrating experience – even when occasionally punctuated by humor far above the quality of most low-budget efforts. Sure, most of it is in the silly vein – the mutant being sent grocery shopping is a personal favorite – but even the satirical elements regarding The Company work thanks to Will van der Zyl’s enthuasiastic performance. But the tone is so inconsistent, particularly in the second half when it’s forced to hurdle towards something resembling a resolution, that even a lot of these moments fall flatter than they should. 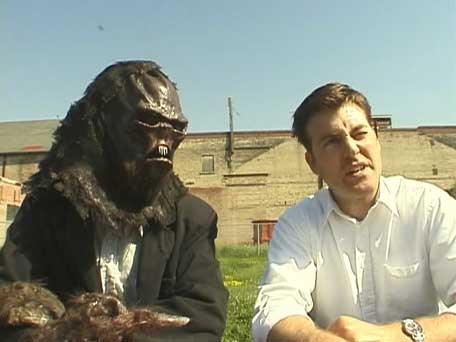 Special effects and make-up are a mixed bag, with the mutants looking ragged and sloppy and the violence ranging from impressive to Todd Sheets’ level. Much better is the soundtrack which mixes noisy garage rock with some stranger offerings which (usually) match the action onscreen quite well. There were some sound issues with my own copy of the film, where cranking the volume left much of the audio incomprehensible, and there’s no doubt that there are some audio issues throughout. Curious viewers will definitely have to be patient if they want to make it to the end.

KILL THEM AND EAT THEM has ambition to spare, but even at 80 minutes it feels overlong and exhausting. There are plenty of interesting characters, and for the most part the actors do a fine job, but increased focus on one of the plot threads and tightening the script as a whole would have paid huge dividends. As it is, it’s a rather glorious mess – and shows an obvious love for genre cinema – and I’m certainly interested to see what else Pendergast might have up his sleeve.

Check out the latest NO-BUDGET NIGHTMARES podcast where Daily Grindhouse contributor Moe Porne joins me for the discussion on KILL THEM AND EAT THEM.