Yeah, I spend a lot of time crotch deep in the murky wasteland that is no-budget feature film-making, but most of the really exciting – and impressive – work is being done with shorter pieces. While the seams start to show immediately over a threadbare 90 minutes, a shorter format allows inexperienced directors to appropriately explore their concepts without the baggage of having to sustain things over the long-haul (or stretch things beyond their breaking point).

If you have a short film you would like featured on the NO-BUDGET NIGHTMARES SHORT FILM ROUND-UP, toss me an e-mail at doug@dailygrindhouse.com

From Always Wrong Film comes director Matthew Ragsdale’s THE CAN-CANNIBALS DOUBLE FEATURE, which takes the form of a VHS double-feature movie trailer, with both films starring the punk rock burlesque troupe The Can-Cannibals. The first is called, appropriately, THE CAN-CANNIBALS and features the group of lovely ladies as a group of – what else? – cannibalistic burlesque dancers. Officer Elmo Washington is hot on the trail of these flesh eating fiends, but finds tragedy (and extreme violence) at every turn. The second feature REBELLE’S REVENGE apes the familiar structure of a revenge movie, with a gang member being carved up and left for dead before returning to strike some bloody retribution.

Those familiar with the fake trailers in Tarantino/Rodriguez’s GRINDHOUSE will know what to expect here, and director Ragsdale has done a quality job replicating the look, feel and soundtrack of classic exploitation. It’s all quite intentionally silly – and features some of the least convincing fake intestines I’ve ever seen – but it’s nasty, bloody fun and doesn’t overstay its welcome. The acting from the Can-Cannibal gals is inconsistent (to say the least), but fans of 70s female gang films like Jack Hill’s SWITCHBLADE SISTERS will find plenty to love here.

the end from Cam McHarg on Vimeo.

A Vimeo Staff Pick, Cam McHarg’s THE END plays like a particularly dark and stylish joke on its main character.

Barry (Cris D’Annunzio) is rather desperately trying to kill himself, and we first meet him as his car has broken down inches away from a railway track – his frustration visible as the train passes right in front of his car. Returning to his hotel room, Barry tries a variety of (darkly comic) unsuccessful suicide attempts, finding some brief redemption before a hilarious – and unexpected – twist ending.

An exceedingly well structured short, THE END features some outstanding special effects – well beyond what I usually see in lower-budgeted efforts. But the impressive visuals don’t end there, as the cinematography by Justin Gunari – so often an after-thought in limited budget productions – is outstanding, and makes the most of the restricted hotel room space that much of the film takes place in. D’Annunzio, who also helped produce, hits the perfect balance of tragedy with a hint of comical exasperation at his increasingly unlikely plight. McHarg has full command of the tone, and the result is a polished, entertaining and extremely professional looking short. 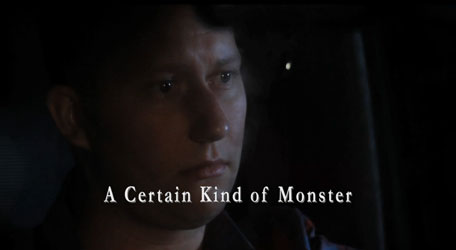 Director Mike Moring has mostly focused on comedic shorts over the last few years, but A CERTAIN KIND OF MONSTER sees him tackling some much darker subject matter. The twenty-four minute piece involves a mysterious female hitch-hiker (Jen Yarrow) who gets picked up by the likable Ben (Josh Cutmore) during a beastly rainstorm. Ben offers her a place to stay for the night, but when she appears in his bedroom and starts to disrobe, her true motivations become clear. I don’t want to give too much away, but it gets plenty bloody.

While its intentions are horrific, much of A CERTAIN KIND OF MONSTER plays out like a character study of two lonely people inelegantly getting to know each other. That it goes down an explicitly sexual and violent path might come as a bit of a shock to unsuspecting viewers, but it adds a bit of intentional despondency and resonance to the ending. It might be a bit slowly paced for genre fans, but the pay-off is worth the wait. The build up works because of the chemistry between the two leads, and – particularly – Yarrow’s brave performance, which involves a surprising amount of nudity for a low-budget production. The credits ends with a “To be continued..”, but I think this morose tale is probably left best as is, as too much exposition might dull the edge.

Join me this week for brief interviews with directors Matthew Ragsdale, Cam McHarg and Mike Moring.