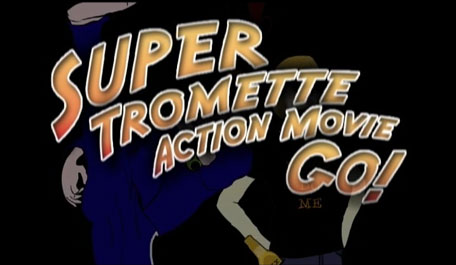 Like many genre movie fans, I have a love/hate relationship with TROMA ENTERTAINMENT, Lloyd Kaufman and Michael Herz’s independent film production and distribution company that managed to find surprising success during the height of the 80s video era. While I quite enjoy many of their original productions – TROMA’S WAR, THE TOXIC AVENGER – and helped distribute some personal favorites – REDNECK ZOMBIES and RABID GRANNIES among them – they also helped bring a low-brow, often distressingly crude sense of humor to their productions that would unfortunately pervade many of their low-budget offspring. Sadly, few can do Troma like Troma, and these imitators tend to have plenty of dick and fart jokes, but little of the unfiltered irreverence of their modestly budgeted peers.

And then there’s Steven A. Grainger’s SUPER TROMETTE ACTION MOVIE GO!, which is so committed to being entirely (and joyously) threadbare in its tastelessness that to complain would be missing the point entirely. Sets are composed of desks, chairs and imagination. Establishing shots are MS-Paint drawings of locations. Logical consistency is pissed on and flushed whenever possible. It’s a complete mess, and takes great joy in its never-ending stream of dick, fart, rape and pedophilia jokes. And it’s occasionally funny! Not.. always, however. Often it’s just thoroughly irritating, though that’s sort of the point as well. There’s a punk attitude to the proceedings that I latched onto, but its peculiar mix of bodily fluids and idiocy manages to run out of steam before the closing credits roll. 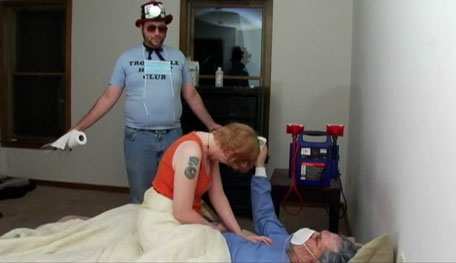 Dyslexia (Merrie Swain) and Labia (Jen Tonon) are COPS in Tromaville (Yes, the film takes place in the fictional setting of THE TOXIC AVENGER, and even references his absence)! They are assigned to track down the ringleader of a bunch of raincoat wearing pervert pedophiles known as (sigh) The CockShockers. They have a variety of close scrapes (and narrowly avoid molestation themselves) and some surprisingly graphic adventures before things come to a shocking (and awfully messy) conclusion.

Perhaps the most shocking thing about SUPER TROMETTE ACTION MOVIE GO! is not that it exists – though that’s quite baffling – but how nicely it nestles itself among Troma’s already shaky internal continuity. Of course Troma boss Lloyd Kaufman shows up briefly as a CockShocker (Lloyd has long been a frontrunner in the “most colorful IMDB page” competition), but there are also extremely brief appearances from TOXIC AVENGER’s original Melvin Mark Torgl as well as GWAR frontman Dave Brockie. Some surprising starpower for a film that seems at least partially – if not entirely – improvised. While missing much of the sex and violence that marks Troma’s better efforts (the content here is a tad more scatological), it’s still plenty crude, and it’s hard to shake the impression that it’s successfully accomplishing everything it’s setting out to do. 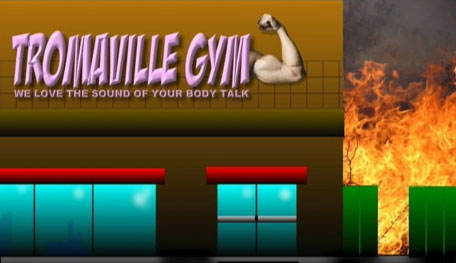 Performances range from WTF to WHY?, though the choice to entirely dub the lead performance of Merrie Swain with a man’s voice is certainly a head-scratcher, though when your action climax morphs into a musical tribute to pedophilia, I guess it’s tough to be surprised by anything. Director Grainger actually gives one of the most amusing performances as the tenderly named Walter Biggens, while most of the supporting cast are just asked to gesticulate wildly at the camera. Most do it quite convincingly.

Production values are, of course, very low – I mean just LOOK at the police station set  – but there’s some surprising inventiveness in the visual style; from brief animated segments to news broadcasts to the mentioned musical number. If there’s anything that SUPER TROMETTE ACTION MOVIE GO! has learned from its official Troma big brothers, it’s that anything goes, and it’s refreshing – if a bit disconcerting – to really never be sure what’s going to happen next. A rare enough feeling, even in the no-budget world. 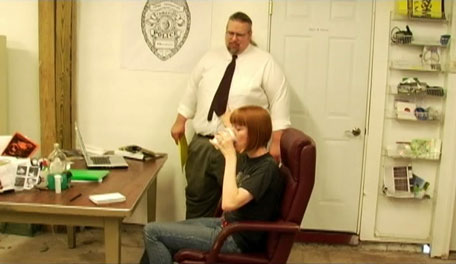 It’s crazy. It’s stupid. It’s SUPER TROMETTE ACTION MOVIE GO!, and while it doesn’t quite capture the madcap tone of the best Troma films, it still manages to wring some entertainment value out of poop and wiener jokes. You’ll get sick of the whole mess before its 90 minutes are up, but while it has your under its spell it makes for surprisingly brisk fun. Definitely not for anyone with a modicum of good taste, but fine dining for those who live in the no-budget trenches.

Join me later this week for an interview with SUPER TROMETTE ACTION MOVIE GO! director Steven A. Grainger