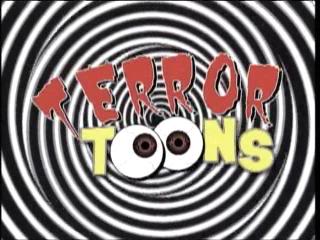 Welcome to a whole new world of terrible.

The credits – which feature a main theme very reminicent of Danny Elfman’s BEETLEJUICE soundtrack – are prefaced by a gruesome scene where an apparent young boy (played by someone quite older, which is a running theme) is tied to a slab while the nasty Dr. Carnage (wearing a giant, immovable Halloween mask) does various cartoonishly nasty things. It ends with Carnage pulling out the unlucky victims internal organs (which come out in one ridiculously long stream) until his skull pops out at the end. All of this purports to take place in “the cartoon dimension”, represented by intentionally cartoony greenscreen backdrops, with various slide-whistle sound-effects. Your reaction to this introduction will likely give you a good idea of whether this film is for you, as most of what you’re about to see is just more of the same – a ton of cheap looking effects mixed with extreme violence and some very bad acting. 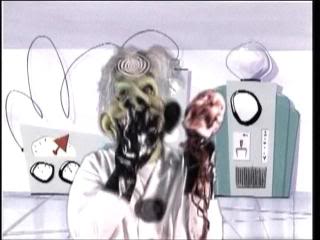 In the non-cartoon dimension we’re introduced to Candy (Borden, who is disturbingly playing a pre-pubecent with gigantic fake breasts) singing “Rubber Ducky” in the tub, which I can’t imagine Jim Henson would be ok with. She, along with her sister Cindy (Beverly Lynne) and Cindy’s friend Amy (Kerry Liu, who is particularly awful) are home alone for the weekend, and have been forbidden by their parents – the mother being played by quite the manly transvestite – to have any boys over. While Candy entertains herself with a DVD full of (live action) cartoons, the older gals get some male friends over and have a game of strip-Ouija. Yes, this happens. Soon, the characters in Candy’s cartoon – including Dr. Carnage and the insane gorilla Max Assassin – escape into the real world and start slaughtering folks with toon-like implements, including some giant shears, a pizza cutter, and (worst of all) disco music. Cindy is eventually transported to the Cartoon Dimension where she discovers that the toons are actually being created by.. Satan! Yeah, it was Satan all along, and he explains himself with typical verbosity before, realizing that she now has the powers of the cartoon dimension, Cindy transforms herself into a super-hero and takes out the two main baddies.

What TERROR TOONS misses most of all is the sense of unleashed zaniness that typifies the cartoons it’s trying so hard to emulate. The production values are certainly there, and the significant amount of props and surprisingly effective gore show a large amount of planning went into making the film look and sound the way it does. That how it looks and sounds is generally irritating is almost to be expected. It so desperately wants to be silly, violent fun that it misses out entirely on the manic inventiveness of actual cartoons, relying mostly on oversized implements of death and ridiculous sound effects to carry the load. The only actual animation in the film consists of two or three frames, which may be the minimum amount of movement to actually constitute as animation. 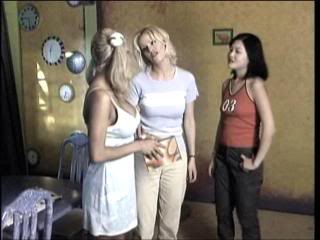 While ostensibly a horror film, director Joe Castro doesn’t seem very interested in anything but killing off his disposable cast as rapidly as possible, so therefore any suspense is secondary. The film relies heavily on bluescreen work, but the compositing is quite poor with blue halos very visible around cast members. Aside from that, the film looks fairly good, with competent lighting and sound compared to the shot-on-DV effforts I’m used to. Camerawork is mostly static, and the editing is servicable.

Acting is a mixed bag, with Beverly Lynne surprisingly game in the lead, but the other victims being less than convincing. Surprisingly, despite the semi-disturbing nudity at the beginning, there’s not a hint of any skin for the rest of the run-time, and that includes the protracted game of strip-ouija. Jack Roberts is quite good as The Devil, bringing a decent amount of gravitas to some difficult (and generally nonsensical) dialogue. Matty Moo as Dr. Carnage and Scott Barrow as Max Assassin only have to mug incessently to the camera, and do this quite effectively. 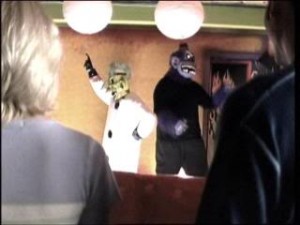 While the bluescreen special effects and animation are less than impressive, the actual gore in the film is very well done. In particular, a scene where one of the characters is scalped, has his skull-cap removed and his brain, um, tickled is dementedly revolting. Organ meat is regularly on display, and there are enough decapitations and ladies being sawed in half to keep any gorehound satisfied. The creatures look quite good, though the giant rubber masks look more like something out of a GWAR concert than proper movie costumes.

The film is presented in fullscreen, and the competency in the production means that it’s free of the muddy, dark scenes which plague a lot of other features we’ve covered. While the music (by J.M Logan) is limited, and quite derivative, it’s still a step up from similar productions, and usually appropriate to the material. Dialogue recording is inconsistent, but at least it was recorded with a mic. 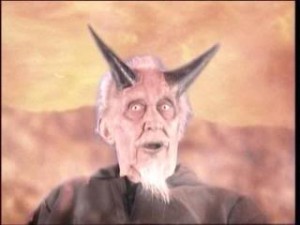 TERROR TOONS is a tasteless mix of weak comedy and gore that definitely isn’t as fun as advertised. Smatterings of interesting effects can’t save what amounts to a 5 minute FX reel stretched to 75 minutes of mugging at the camera, and while Castro seems to be a competent director, the tone ends up so muddled that the final results simply fall flat. Viewers with low expectations may get a few cheap thrills, but anyone else will want to stay far, far away.

Join us this week for the latest DAILY GRINDHOUSE PRESENTS: NO-BUDGET NIGHTMARES PODCAST where Moe and Myself will have a chat about TERROR TOONS.