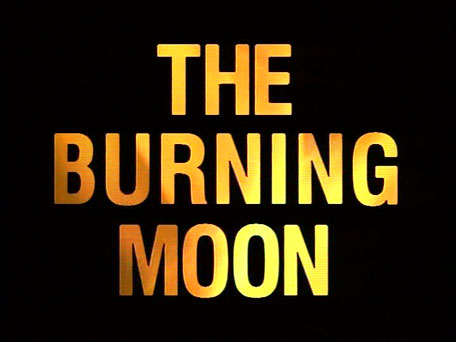 
When it comes to no-budget film-making, the country has gleefully embraced the potential of grimy nastiness, and in the late 80s produced some of the most shocking and original of all ultra low-budget productions. Jorg Buttgereit’s NEKROMANTIK and Andreas Schnaas’ VIOLENT SHIT (that country’s first direct-to-video film) combined graphic violence with twisted sexuality, and happily stomped on topics usually considered indecent or immoral. Out of this vile pit of gore-fueled creativity came former dental technician Olaf Ittenbach, who turned his interest in horror films and special effects into a true no-budget success story, beginning with 1989’s BLACK PAST – and then breaking through in the late 90s with the one-two punch of PREMUTOS – LORD OF THE LIVING DEAD (1997) and the shot-on-video semi-compilation THE BURNING MOON. 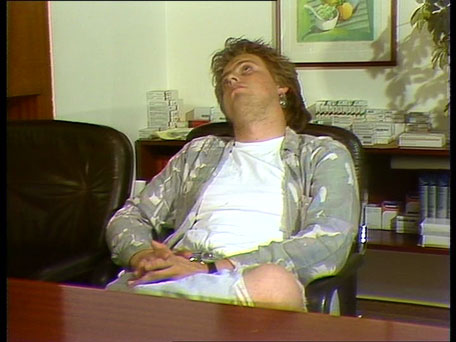 THE BURNING MOON tells three incredibly nasty stories which wallow in misery in violence, but do so with an enthusiasm – and production values – rare for low-budget titles. The wraparound story involves delinquent Peter (Ittenbach himself) being conscripted to baby-sit his sister after a violent altercation with his parents. In fact, everything about Peter is violent and ugly – typified by his decision to shoot heroin before bursting into his sister’s bedroom to tell her some bedtime stories. The two stories make up the bulk of film’s running time, and show off Ittenbach’s debt to American slasher films – as well as his obvious talent with special effects.

The first is entitled JULIA’S LOVE, and takes the form of a truncated and particularly nasty slasher film. Mental patient Cliff Parker escapes from the St. Petersen Mental Clinic (leaving a swath of corpses in his wake), and soon (somehow) manages to get a date with the attractive Julia (Beate Neumeyer). Recognizing that her (apparently clean-cut) date’s car is actually the vehicle stolen by the escaped lunatic, Julia escapes – but leaves her wallet behind. Soon Cliff arrives at her house and dispatches her entire family in a variety of gruesome ways, before he comes to a violent – and ridiculous – end at the hands of an off-duty police officer. While it starts slowly, this segment soon ramps up – culminating in some very effective and unpleasant deaths, but there’s not much to enjoy unless you’re a gore-hound. While competently performed (though all dialogue appears to have been dubbed), there’s little character development outside explaining the root of Cliff’s psychosis (his grandfather slaughtered his family in front of him), and Julia makes for a particularly toothless protagonist. 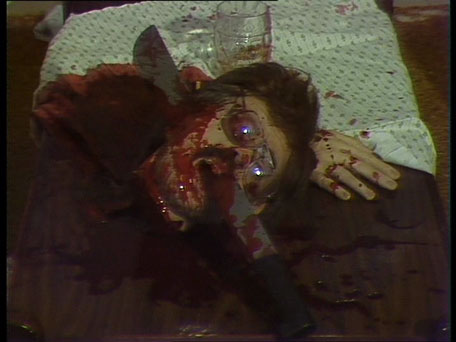 Much better is the second segment THE PURITY, which is a period piece involving the Bavarian priest Ralf (Rudolf Höß), who spends his off hours raping and murdering, ostensibly because he secretly LOVES Satan. He develops a friendly relationship with Justus, a local farmer who is continually the target of the abusive townspeople, who doesn’t suspect the priest’s nighttime proclivities. After Ralf kills himself, Justus is blamed and eventually is murdered by Frank; one of local bullies. That night, Justus is resurrected by Satan, and Frank is subjected to the endless tortures of hell – which involve some of the goriest scenes in Ittenbach’s career – and that’s saying something. Organs are strewn about, heads are shot off, bodies are ripped to pieces.. and that’s before we witness Frank’s personal collection of torments.

The whole thing ends with a confusingly distraught Peter finishing his story, before heading into the kitchen and slitting his wrist. A suitably nihilistic ending, but somewhat anti-climactic after the chamber of horrors that has come before. Him being a violent sociopath certainly doesn’t help gain him much sympathy. 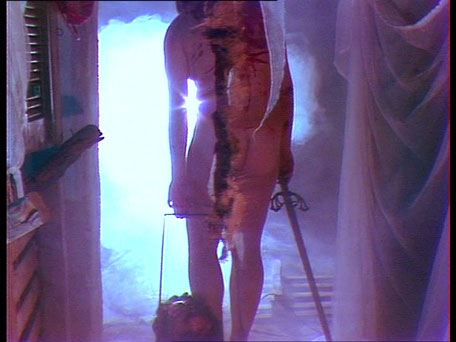 Shot on video, THE BURNING MOON doesn’t show much interest in displaying its parade of gore very stylishly. While there are some brief, ambitious sequences – most notably the one featuring the titular burning moon, and a lengthy (hilarious) sequence showing Cliff’s romantic fascination with Julia – it`s generally a very flatly shot and edited movie, though quite competent considering its no-budget origins. I`m unsure how much of it was actually filmed in 1997 ; the video quality suggests it easily could have come from much earlier, particularly since PREMUTOS was released the same year on 16mm – and shows Ittenbach’s significant development as a film-maker. But this is film-making as a rebellious underground statement – designed to shock and repulse in equal quantities. Any actual entertainment value is secondary. 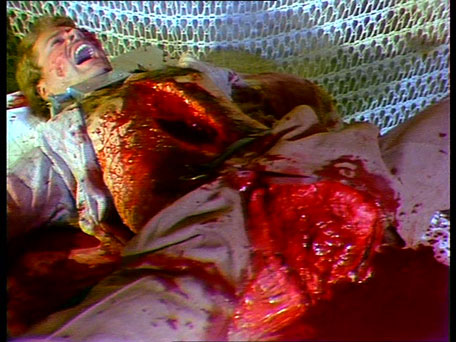 The initial shot across the bow in what has evolved (?) into a career full of occasionally inspired – and just as often uninspired – nastiness, Olaf Ittenbach’s THE BURNING MOON is about as subtle as a sledgehammer to the skull, but still manages to impress thanks to two predictable but entertaining stories that revel in violence and bad-taste. While at it’s heart it’s simply a particularly mean-spirited demo-reel, the occasional flashes of dark humor – as well as the frequently shaky production values – keep things from getting too murky and unpleasant. While not quite yet reaching the heights of some of his violence-obsessed countrymen, Ittenbach shows here that he had what it takes to deliver the goods, and PREMUTOS would confirm much of the potential shown here. Thoroughly unpleasant; which is entirely appropriate.