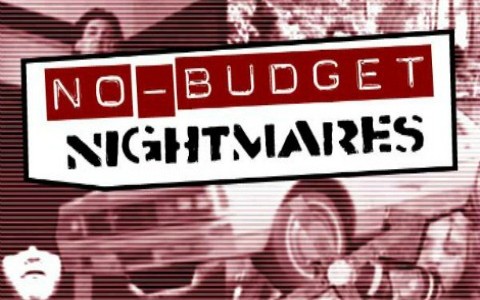 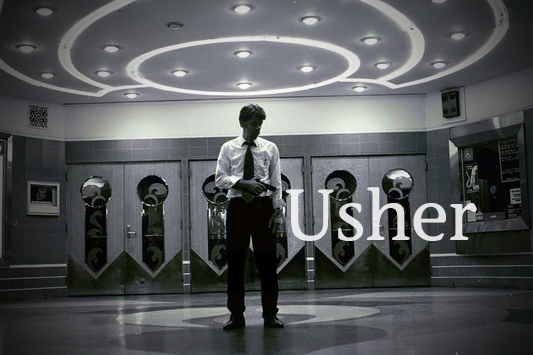 Ash (Thomas Alexander) is a talented young hit-man, but when work for his specific set of skills dries up, he’s forced to look for alternate employment. Spotting a HELP WANTED sign at a local theater, he decides to give it a (figurative) shot. But will his murderous skills transfer to sweeping up popcorn and kicking out nogoodniks? Or will a run in with a nearby restaurant employee send him over the edge?

And there’s the set-up of Roger Leatherwood’s fun, occasionally morose retelling of Poe’s “The Fall of the House of Usher”. The scale remains appropriately small throughout, but the unique theater setting allows for some CLERKS-ish antics when its not delving into heavier themes of redemption and morality. Best of all, it lets all die-hard film fans live out the fantasy of having someone tough-as-nails to deal with the seat-kicking, chattering reprobates who have soured the movie-going experience. At least, for a while.

USHER’s greatest asset is its setting. The cast and crew were given free reign to use the beautiful Orinda Theatre in Orinda, California, and Leatherwood makes wonderful use of the space – including areas not usually open to the public. This pulling back of the curtain allows for bits to take place in the manager’s office, the projection room, the roof and other locations – opening up what could have been a rather claustrophobic tale. Combine this with the gorgeous art deco design of the location, and you have a fine location indeed

It’s also helped immensely by a quietly intense central performance from Thomas Alexander, who manages to portray restrained irritability with just a hint of playfulness. His character isn’t particularly well developed, but Alexander sells his big scenes, and manages to realistically bring menace to his various confrontations. Supporting performances are all solid, but this is Alexander’s show, and he’s definitely impressive.

While production values are high for such a low-budget effort, there are occasional issues with sound quality and editing that betray the film’s limited resources. As a scene changes angles, occasionally the end of lines will get cut off, or you’ll hear a hint of the audio from that different take. It’s nothing too distracting, and most viewers probably wouldn’t notice, but it jumped out at me when the rest of the production is so polished.

More troublesome are some pacing issues in the film’s climax, where Ash is confronted by a number of characters in the theater. The action starts out well, but soon the locations are shifting and the geography of the confrontation becomes difficult to follow. It improves once a few get dispatched, but it takes away slightly from the drama of the situation.

An easy recommend, USHER might only be tangentially related to the Poe story that inspired it (my memory from High School is a bit hazy, but the connection seems minimal), but it makes for a slick, fun character study with a few laughs thrown in for good measure. A beautiful cinema makes for a unique location to stage things, and the idea of a hitman becoming a movie usher is already enough to get most of you lunkheads to check it out. Thankfully, it’s available to watch for free on youtube. Check it out at the bottom of the page.