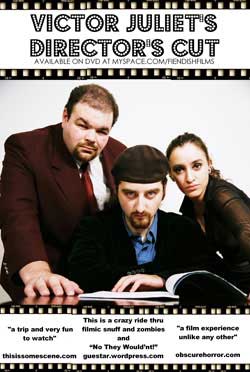 In 1987, five years before he would shatter expectations with RESERVOIR DOGS, Quentin Tarantino made his (almost) feature film MY BEST FRIEND’S BIRTHDAY. Shooting in black and white on an ultra low budget, Tarantino asked acting class friends and fellow employees at Video Archives to fill out the cast of this comedic film, which was – and remains – almost entirely forgotten.

As it should be, as it’s not very good.

But it was incredibly important in Tarantino’s development as a filmmaker. Making that film was his film school, and the lessons that he learned on that project informed all of the choices he would later make on RESERVOIR DOGS. While you can get plenty of knowledge out of film-making books, or classes; in the end the best way to learn is to go out there and do it. Because the difficulties you’ll encounter – and there will be plenty – will make you a better, smarter and more prepared film-maker. 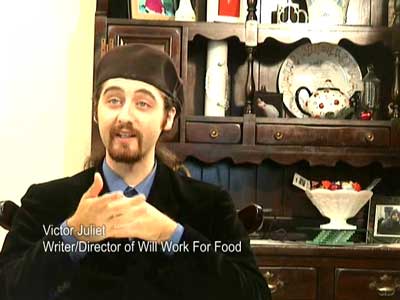 Many of the films I’ve featured in the NO-BUDGET NIGHTMARES column really fit into the same category as MY BEST FRIEND’S BIRTHDAY. They are generally amateur efforts, and often by first time filmmakers who are simply passionate about the process and want to jump right in. And why not? Even with Tarantino’s ultra low budget (reportedly around $5000) you could get yourself a decent digital camera, a microphone, and some editing software and tomorrow you could be making your very own film.

Of course, it’s a bit of a double edged sword. Nobody judges Tarantino by his first film, because few people have even seen it – or, at least, what remains of it. If it had found proper distribution – and not been almost entirely destroyed in a lab fire – his career might have taken a much different path. Like it or not, when you release a work into the world you are opening it up for judgment. Not just judgment of that film, but also judgment of yourself and your ability. When you show off those skills when they are still being developed, you risk being judged unfairly.

I try to keep that in mind when writing about amateur films. I try to search for sparks of talent or inspiration in films sometimes lacking in some very basic qualities. 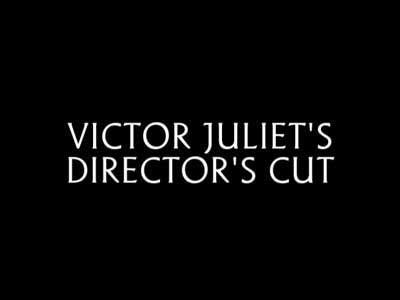 Which brings us to Michael Fitzgerald’s VICTOR JULIET’S DIRECTOR’S CUT, a uniquely formatted and often quite clever horror portmanteau that is unfortunately unable to rise above its own production limitations. It feels like a project where Fitzgerald, and his crew, walked away with a lot more knowledge than they started with. But this learning experience, no matter how valuable, simply doesn’t contain enough interesting or entertaining moments to keep a viewing experience from being consistently frustrating.

The film is split into five acts, though separating the film this way has no real thematic importance. In fact, the first segment – WILL WORK FOR FOOD – is simply a horror short featuring a homeless drifter being picked up and brought to a man’s house where he’s asked to help dispose of a dead body in the basement. The twist is a bit of an eye-roller, but it’s the sound issues which make this segment difficult to get through. Not only are edits accompanied by an audible change in sound quality, but the most lengthy piece of dialogue is obviously – and terribly – dubbed, which makes for distracting viewing. 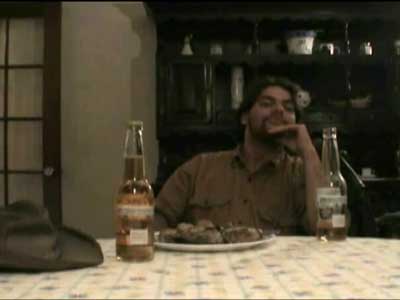 The segment is followed by a rather neat trick, a behind-the-scenes “documentary” featuring (fake) interviews with the cast and crew of the previous short. WILL DIRECT FOR FOOD is slight, but it has a few fun gags, and does a fine job satirizing the pompousness of low-budget directors with the introduction of the character of Victor Juliet (Matthew Auslander), as well as his trusty casting assistant Rachel Ward (Jessica Bardrof) and production assistant Peter Thomas (Thomas Camardello). It’s also a neat way to excuse some of the limitations of the previous short, though doesn’t give much of a suggestion of what is to come.

Segment three is CALLBACK, featuring actress Sarah Bellinger (Nikki Perdikakis, in some of the most unflattering clothes you’re likely to see) getting a callback for Victor Juliet’s latest film, THE WRATH OF THE NECROMANCER. Enthusiastic when she arrives, she’s introduced to her co-star and chained to a wall before discovering that the violence in the film is a bit more real than expected. It’s the worst segment of the film, with some terrible acting from Perdikakis, and a particularly obvious and uninteresting twist. Is it a snuff film? Are the film-makers simply sadistic? The lack of answers are supposed to make the audience curious, but it really only serves to make the whole thing feel half-baked. 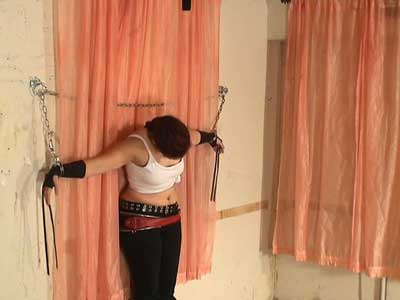 More enjoyable is THE SCREENING, where the murderous co-star from CALLBACK is, uh, called back so that Victor and his assistants can test a special new drug on him. The question of how Victor Juliet could afford some ultra secret serum when he can’t even afford decent film equipment or professional actors goes unanswered, but we do discover that this formula – which looks suspiciously like RE-ANIMATOR fluid – first kills the subject, before bringing them back as a zombie. Why is it easier to kill actors and bring them back as zombies for your film rather than just throwing make-up on them? Who knows. But at least this segment had a sense of fun, even if it’s abbreviated.

Finally, and most interesting in terms of content, is CRITICAL REVIEW, where Fitzgerald has a little fun with blogger and online critics while simultaneously mocking his main character. Abigail Smythe (Heather Allen) is a horror movie fan who, after watching one of Juliet’s weak zombie efforts, writes a scathing review on her blog. Enraged by her (apt) comments, Victor Juliet goes to the theater where she works and confronts her, eventually forcing one of the slowest sword fights in recorded history. The segment ends with Smythe playing poker with some critic friends, who suggest that perhaps killing off a few of the awful filmmakers out there might not be such a bad thing. 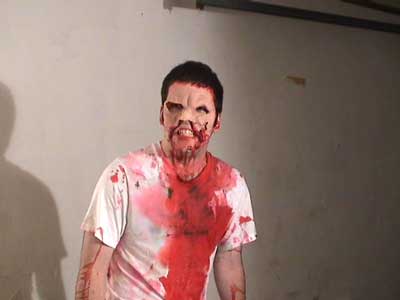 Fitzgerald obviously has a grasp of film-making logic, and the structure makes for occasional bright spots, but there’s simply little here to maintain interest over the brief running time. The character of Victor Juliet has some satirical potential, but he’s simply not given enough interesting things to do, and what he is given is sabotaged by the crummy production values. The film ends with a tease of a sequel, and despite my thoughts here I’d actually like to see it, as hopefully with a bit more experience and resources, perhaps Fitzgerald can show off his true ability. Until then, we can chalk this up as a learning experience.