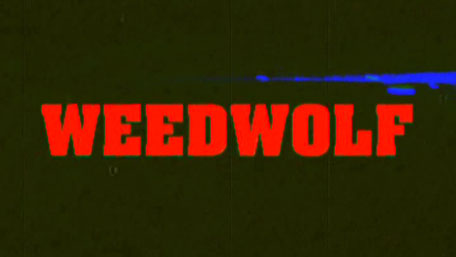 Look. If you’re the kind of person likely to sit down with a bowl of popcorn and a few friends to watch a film called WEEDWOLF, it’s unlikely that anything I’m about to write is going to change your mind. In fact, the creators of WEEDWOLF (Director/Writer Calvin Hall and co-writer Tommy Slama) seem quite aware that they are making something that will appeal to a very specific, niche demographic of stoners and general reprobates (like myself) who enjoy watching guys in rubber masks murdering, taking part in rap battles and battling monsters with light sabers.

Yes, WEEDWOLF is a strange animal. It’s ostensibly a very, very unfunny comedy that still manages to pack in enough general oddness to remain entertaining for a good portion of its otherwise interminable two hour running time. It seems at once joyously slapped together and meticulously planned, with filters and effects added to each scene seemingly at random, while the copious amount of dialogue and occasional scene featuring a crowd suggests at least some forethought was put into the production. In the end, your enjoyment of the movie is going to rely massively on your tolerance for dumb, purposely offensive humor about race and sex and your enjoyment of songs, monologues, and jokes having to do with smoking pot. If all of that – mixed with smatterings of gore and nudity – sounds like something you might enjoy, then you’re in luck! 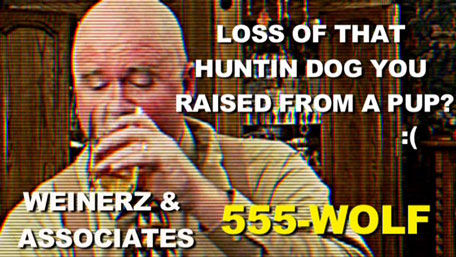 Deep breath. Ok. Here’s the plot. A vicious WEEDWOLF is on the loose in Normal, Texas and the only ones who can stop it are Sheriff Hardwood (E. Lee Smith), his overgrown idiot son Bumper (co-writer Tommy Slama) and his deputy Rodriguez (Guy Rodriguez). Blaming the attacks on wild dogs, the trio halfheartedly investigate the mounting corpses, while occasionally being assisted by the hulking rapper Junebug (A.J. Germaine), his niece Mary Jane (Kaitlyn Colunga) and the rest of Normal’s colorful characters. Occasionally the plot pauses for a music video, commercial, extended drug montage (including lightsaber fights), RAP BATTLE, and shots of breasts and/or people laughing. None of it makes any god-damn sense.

But it’s certainly energetic. Shot like an extended acid trip, the film tosses in all sorts of filters and effects to make a viewing a truly psychedelic experience. Of course it all starts with the now cliche film grain and damage, but BLOOD FREAK this aint and soon any attempts at exploitation movie legitimacy are wiped aside in favor of (fake) Willie Nelson cameos, kids rolling joints and a Sasquatch having sex. ALL OF THESE THINGS HAPPEN. The acting is piss poor, and the Weedwolf himself looks only vaguely better than the dimestore costumes of PIRAHNA MAN VERSUS WEREWOLF MAN, but it’s hard to care too much when you get to see him rip out intestines, do a keg stand, and masturbate while two women have sex. 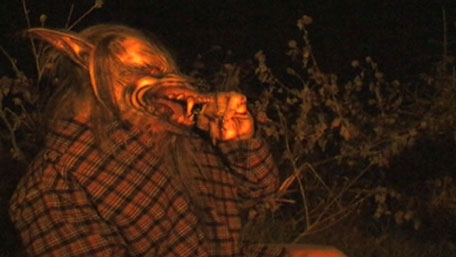 Whenever the film pauses from batshit insanity, things manage to get even more incoherent, with characters spewing out some of the most puerile humor this side of a TROMA film. While the “I’m so NAUGHTY” gags are fun at first, a little goes a long way and even permanently stoned viewers will get exhausted of the injected fart noises and extended scenes of characters pitching euphemisms at each other long before the closing credits. This reaches its nadir during the now requisite newscast scene, which not only looks horrible – thanks to some terrible green-screen work – but also seems to go on forever. 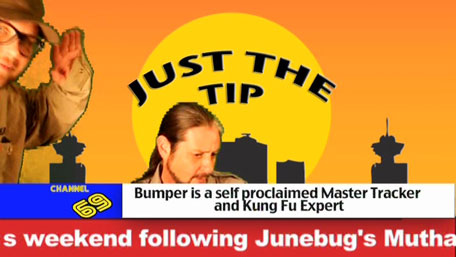 Look, you know whether you wanted to see this before I even wrote a word, and if you’re looking for Werewolf carnage, LOTS of pot, and debauchery than WEEDWOLF delivers in spades. It all ends up being too much of a bad thing, but I imagine no amount of horrific acting or incompetent camera work is going to dissuade the intended audience, and nor should it. It’s fucking insane, and I don’t know whether I should take the last minute tease of a sequel (currently in production) as a promise or a threat.

It might take some digging, but if you’re willing to take the effort to track down a copy of this film, then it’s almost certainly for you. Smoke ’em if you got ’em.