James Gunn (SUPER, THE BELKO EXPERIMENT) sets up the story and tone of GUARDIANS OF THE GALAXY, VOL. 2 in the first two scenes. Kurt Russell’s character (Ego, Peter’s father) starts the film with Meredith Quill (Peter’s mother) on Earth before an excellent opening credits fight sequence, featuring a dancing Groot. Obviously, this story is going to be about Peter’s father, and the initial battle scene with an adorable baby Groot dancing in the foreground sums up this movie perfectly. While it’s an emotional movie (more so than any other film in the MCU), it’s a ton of fun and funnier than the majority of comedies that have hit the big screen in the last ten years.

Marvel has done a great job of translating its characters’ comic book form, and it’s done an even better job of casting them. These are diverse characters played by diverse actors who bring everything together through a surprising amount of chemistry and humor. The story is a little predictable, and the film is abnormally slow for the first hour or so, definitely not expected considering the pace of the first film and the majority of films in the MCU. But Gunn and company keep your attention through these more emotional, slow, more serious periods with well-timed witty humor, using the characters’ drastically different personalities to play off each other.

These actors are put in positions to excel in these roles. Chris Pratt (as Peter Quill a.k.a. Star Lord)plays himself but in outer space, Dave Bautista (as Drax The Destroyer) is a former professional wrestler with limited acting credits who will never find a role more appropriate for him, Kurt Russell is Kurt Fucking Russell, and limiting Vin Diesel (Baby Groot) to three words and putting him inside the CGI body of a tiny tree is rather efficient. Baby Groot is a scene-stealer, and he is basically a new character but requires no character development. James Gunn essentially puts an adorable puppy on screen and the audience will absolutely eat him up — deservedly so as he is central to some of the film’s best gags (I realize puppies aren’t for everybody, but this writer loves them very much).

Baby Groot, along with Rocket Raccoon (voiced by Bradley Cooper) are aided in their comedy much more than in 2014’s first iteration, mostly by Dave Bautista, whose unfiltered Drax adds significantly more to the fun and humor this go-round. And every time the story is getting too serious or dark, a quip or gag is dropped in with near-perfection.Taking place shortly after GOTG Vol. 1, it is focused on Peter’s relationship with his father and further development of the Guardians’ relationships with each other. It’s a nice step away from the happenings of the MCU and what has been building towards the Infinity War with Thanos. They have yet to interact with any of their soon-to-be Avengers teammates, so it will be interesting to see how they are introduced to one another when the next AVENGERS film comes out in 2018.

Visually, Gunn has mastered the way he presents these films. If you don’t find anything funny here, or you don’t like comics or care for the basic storyline, there is more than enough to look at. The colors are rich and vibrant, and he uses a large color palette to make it really easy on the eyes. Lots of reds, purples, magentas, greens, yellows, oranges, blues, and a vast amount of contrast. It’s an absolutely gorgeous film with fantastic special effects — par for the course with Gunn and the MCU at this point. The vibrancy of the colors and effects compliment these oddball characters perfectly. It’s a strange group of antiheroes with large personalities, and it’s only fitting that we are bombarded visually as well.  The soundtrack falls in line as well, and while it had a lot to live up to (the first one was amazing), it does its job quite well – especially with the final battle sequence. 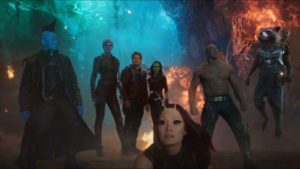 As a comic book reader, it’s always exciting to see how filmmakers will interpret the books and bring them to life. I definitely do not like every adaptation. What James Gunn, along with Marvel, has done with these characters is impressive. This is a smart, witty, incredibly enjoyable film that is arguably better than the first chapter (after one viewing, I still think the first is at the top of my list). It is by far the most I’ve laughed in the theater in quite some time, and the funniest comic adaptation to date (sorry DEADPOOL, your constant sex and genitalia jokes have to settle for second). It drags a little bit, but the quips keep coming and keep your attention. Once the motives of the main villain are revealed, everybody and everything kicks it up a notch (several notches really) and I was left leaving the theater more than satisfied. This is a very entertaining film that I will enjoy viewing multiple times. 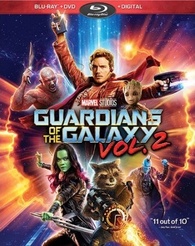