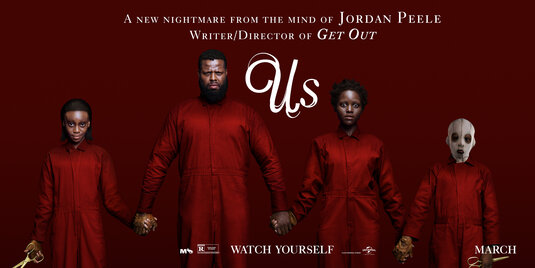 [The following contains spoilers for Jordan Peele’s GET OUT and US.]

At this point, Jordan Peele is only two films into a career as a director, and already he’s successfully established his own brand – as easily, or even more easily than M. Night Shyamalan did when he debuted with THE SIXTH SENSE all those years ago. Effortlessly, Peele has established what a Jordan Peele film looks like, feels like, and what it’s about. This branding, of sorts, becomes apparent as early as the opening credits for his newest film, US, over which plays an unusual, vocal-driven piece by composer Michael Abels. However, Peele isn’t interested in regurgitating his race-based runaway film debut, GET OUT. This time around, despite a similar satirical look at American culture as it pertains to wealth disparities as well as its “work hard/play hard” mentality, US’s story is more comfortable rooting itself in a higher-concept, almost TWILIGHT ZONE-inspired environment. What that means is US more comfortably resides in the horror genre, which, I would think, makes it a bit more accessible to viewers put off by his race-driven debut.

GET OUT, while injecting a healthy amount of humor into the horror, is an angry film. Though the anger is well-disguised, it delved heavily into matters regarding racism, and more specifically, cultural appropriation. US packs more of a visceral punch, leaning more on violence and gore gags than GET OUT did, but without rendering it as strictly pulpy but ultimately empty horror. US has every bit a purpose as GET OUT, but it strives toward different goals in presenting that purpose to the audience.

If you’ve seen US and delved into the subtext contained within, by now, you’ve likely seen interviews with Peele in which he breaks down the film’s most mooted line of dialogue: when Adelaide Wilson (Lupita Nyong’o) asks her family’s terrifying doppelgangers who they are, her shadow double, named Red, replies simply, “We’re Americans.” What may sound like an abstract answer is a pretty blunt statement from Peele about the origin of his screen monsters. They don’t hail from a distant land, or planet, or another dimension. They are flesh and blood and they exist in the same country as “normal” Americans. They just happen to exist below it instead of on its surface. (I’m assuming that the title US is a play on “the U.S.”)

Even if you’re not interested in subtext (and Peele’s films are designed to be at least engaging and thrilling if you’re not), US still packs a hell of a horror wallop. The opening sequence in which a young Adelaide wanders off from her drunken father and across a nighttime beach with a lightning-infused sky behind her feels wrong, but we don’t yet know why. And once she ends up in an isolated carnival house of mirrors where she encounters her equally young double for the first time, it’s unnerving, but again, without relying on anything obviously scary. And as for the doppelgangers’ first long-shot appearance, forget it: it’s fucking eerie, especially when Adelaide asks her husband, Gabe (Winston Duke), what’s out in the yard of their vacation home, and he responds, in total befuddlement, “It’s…a family.”

Putting the horror aside, US is also unexpectedly poignant and beautiful at times, especially during the final act when Adelaide has her final encounter with her subterranean double, and in an unexpected moment of connection between them, Red tells Adelaide, “If it weren’t for you, I never would’ve danced at all.” In spite of the horror we’ve seen Red and her brood inflict upon Adelaide and her family over the course of US, we’re still taken aback by this moment of…what is it? Empathy? Understanding? Appreciation? Maybe resentment, as Adelaide dancing on the surface of the earth was the thing that made Red realize just how empty her existence really is?

And, lastly, there’s the humor. As expected, based on Peele’s comedy beginnings and the light touch he administered throughout GET OUT, US also manages to be very funny at times, with Winston Duke’s Gabe stealing nearly every scene he’s in. Tim Heidecker, from the insane TIM AND ERIC’S AWESOME SHOW, GREAT JOB, and Elizabeth Moss (MAD MEN), appear as friends of the Wilson family, which leads to some amusing exchanges between the two, getting a lot of morbid mileage from what appears to be a near-loveless marriage. (That their vacation home is much more opulent than the Wilsons’ is a sly comment on wealth disparity.)

Universal has been hit or miss with the amount of special features on their releases as of late, but thankfully, US has been given a healthy collection of special features, all of which give Peele the chance to talk about the intent behind US, what he was trying to say, and what he wanted to do. “Scene Explorations” looks at a handful of notable scenes from the film and breaks down how they were made. “The Duality of US” is the most contextual feature on the disc, as Peele talks thematically about certain concepts. “The Monsters Within US” sits down with the cast as they talk about playing the Wilsons along with their sinister doubles. “Tethered Together: Making US Twice” looks at the challenges involved in having your primary cast play double roles and what’s involved from a technical standpoint. “Redefining a Genre: Jordan Peele’s Brand of Horror” is a love-fest regarding Peele from those who have worked with him, but Peele also gets the chance to talk about his influences. “Becoming Red” offers a fly-on-the-wall look at N’yongo’s staggering transformation. Other featurettes include “Seven Second Massacre,” “It’s a Trap,” and “I Just Want My Little Girl Back.” A wealth of deleted scenes, outtakes, and an extended look at the final dance sequence round out the remaining special features. (No commentary from Peele, which is an immediate thumbs down.)

US is absolutely no sophomore slump. Every bit as worthy as Peele’s celebrated and critically adored debut, and perhaps better, US is horrific, poignant, and somehow hilarious, solidifying Peele’s place as a fresh new voice in the genre. Whether or nor you’re on board with Peele’s approach to the genre, his is a voice that the genre desperately needs right now, if nothing more than to remind critics and audiences that the genre is capable of so much more than what we often get — more importantly: that it’s just as deserving of the celebration and conversation as more mainstream genres.