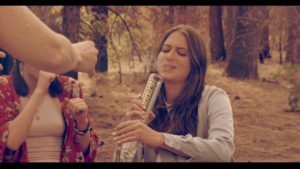 Up until a certain point in time and certainly somewhat still, it had always been the “stoner” character that would usually end up being the butt of all the jokes in a film. You wouldn’t even have to limit yourself to the horror genre to notice this. At the tail end of the ’90s, Sam Mendes’ AMERICAN BEAUTY seemingly shattered the idea that intelligent characters could never stoop to the level of marijuana. Previous to this, just about anyone in any given movie who would partake of the good old wacko tobacco had to either be a bad guy or a total idiot. Writer/director Dylan Reynolds’ 4/20 MASSACRE seems to exist in a reality where literally everyone is either a bad guy or an idiot.

Our first two idiots appear in the form of a couple suburbanite dorks looking for a “hidden treasure” in the woods. They gleefully stuff their backpacks with carefully wrapped bags of bud while exchanging quips that may or may not be funny in the reality in which this story takes place. Keep in mind that in this reality bags of pot sit carefully wrapped in the middle of a weed-field in the middle of the forest in the middle of nowhere. I want to say that one of the dorks is attacked and killed by an unseen force. Instead, our dear idiot is done in by a guy in a monster costume ruining the film’s only chance of any kind of real twist. 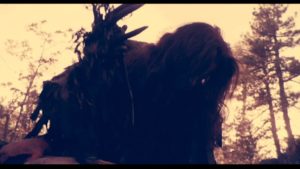 Our next five idiots appear in the form of a birthday party. It turns out that our beloved protagonist’s birthday just so happens to occur on April 20th, so it would make complete sense to camp out that night and get obliviated. Yet we only have four women smoking weed because oddly enough, the birthday girl does not partake of such things. Did I mention that she’s an expert at martial arts? I should. The movie definitely made a point of it. 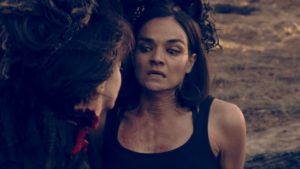 Upon entering the wilderness, our five protagonists are ‘”greeted” by the obligatory authority figure in the form of a somewhat bumbling and unimaginatively named, “Ranger Rick.” After demanding a single beer from the ladies, he issues a dire warning about the seemingly endless fields of pot that exist somewhere off screen and the evil-doers that will protect it at any and all cost. As with most horror movies of this type, his words of wisdom go unheeded as he drives off enjoying his newly acquired beverage.

If there’s one good thing I have to say about the film, it actually ignores most of the stoner clichés that are usually associated with horror movies. Here there’s really only one stereotypical stoner character with everyone else sort of going along with her simply because that’s just how you party in this kind of setting. She even insists that all five of them must inhale and exhale at exactly 4:20 pm and before the minute runs up. Before the slaughter begins, the party separates into two pairs, leaving stoner-girl alone in front of the campfire to smoke by herself. We are then treated to a subplot about an unrequited love interest and a conversation about the nature of mankind. Both have absolutely nothing to do with anything, go nowhere and appear to be thrown in simply as an attempt to make the film seem more interesting. 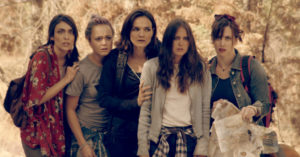 Usually the purpose of a horror film is quite simply to scare you. If a horror movie can’t scare you then it has to be at least silly enough to entertain the massive amount of horror fanatics that love silly horror movies. 4/20 MASSACRE does neither. Granted there are several oddly creative and bloody kills (including a head impaled by a bong that is subsequently smoked from) yet they occur too infrequently and flash by too quickly. It’s almost as if the filmmakers took the less-is-more approach to the wrong extreme. 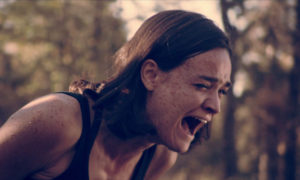 The film also seems to be unpredictable in all the wrong ways. Part of the fun of watching a silly horror movie with a group of friends is guessing the twists. Who dies first? Which character is secretly hacking up the good guys? Who gets murdered in the worst (best) way? It’s really no fun at all when your guesses are better than what the filmmaker is able to come up with. 4/20 MASSACRE isn’t scary enough to be scary or silly enough to be entertaining. It’s not even very good at being bad. In this case mediocrity equates to cinematic ditch-weed. 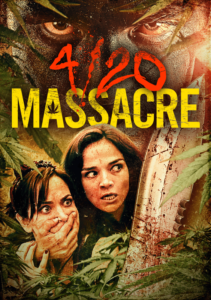