Impersonating an officer… to party! 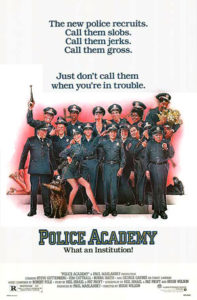 Directed by the creator of TV’s WKRP IN CINCINNATI and co-written by the guy who made BACHELOR PARTY, POLICE ACADEMY transfers the ANIMAL HOUSE zeitgeist to cop college.

The decidedly R-rated POLICE ACADEMY was a blockbuster hit and spawned an immediate sequel, the PG-13 POLICE ACADEMY 2: THEIR FIRST ASSIGNMENT (1985). From there, each subsequent follow-up—there are seven theatrically-released POLICE ACADEMY movies in all—became more kid-oriented, ultimately resulting in a POLICE ACADEMY cartoon series on afternoon TV and a line of tie-in toys.

POLICE ACADEMY‘s Mahoney himself, Steve Guttenberg, jets off with Julie Hagerty and Robert Romanus to a cut-rate Central American medical school run by Alan Arkin in the fashion of a Banana Republic dictator. Gilbert Gottfried attempts a Spanish accent as a faculty lackey: ¡Es no bueno! 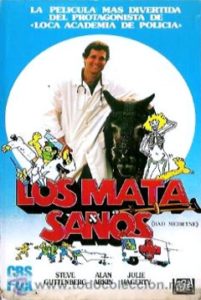 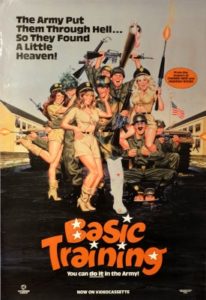 USA UP ALL NIGHT host Rhonda Shear got to introduce herself multiple times as she co-stars here with Anne Dusenberry (GOODBYE FRANKLIN HIGH) and Angela Aames (H.O.T.S.). They’re all office assistants at the Pentagon, where some hot doings go down at the height of the Cold War. 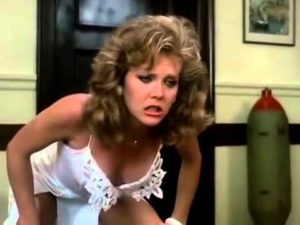 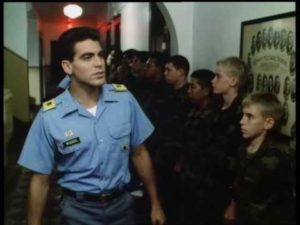 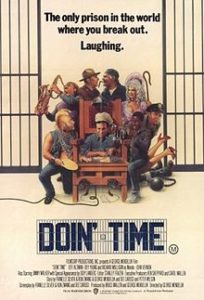 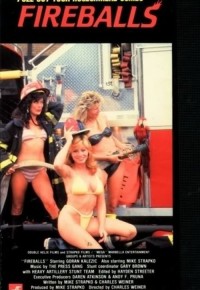 One of the last “Balls” movies (MEATBALLS, SCREWBALLS, ODDBALLS, et al), FIREBALLS is uniquely nutty. It’s an ego trip for co-writer, star, and producer Mike Stapko, who storms the screen as an extremely Belushi-like firefighter named (oh, yeah) “Badushi.” He and his fellow blaze-batting party-beasts get forced to accept new firehouse recruits to impress Japanese business investors. Naturally, they select female candidates by mounting a bikini contest. The whole slapstick boondoggle peaks when Badushi crashes through the window of a topless massage parlor. “Fireballs” is the name of the station’s mascot parrot.

Buffoonish, megalomaniacal real estate tycoon “Warren Frump” (David Henry Keller) has goons torch buildings all over the inner city so he can swoop in and build more Frump Towers. Lingerie-model-esque fire academy graduates Gianna Ranaudo, Martha Peterson, and Renee Riaford make it their business to hose Frump down. FIREHOUSE is a brashly funny and it beat GREMLINS 2: THE NEW BATCH’s “Daniel Clamp” character by three years to a big-screen send-up of, you know… that guy. 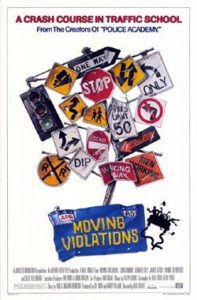 POLICE ACADEMY screenwriters Neal Israel and Pat Proft more-or-less went through that original script, changed any specific cop references to “traffic school,” then Xeroxed it and—voíla!—MOVING VIOLATIONS was ready for Israel to direct. The end result is unexpectedly amusing. Stacy Keach pushes his narc persona from the Cheech and Chong movies to a fresh heights of fascism. John Murray, in the Steve Guttenberg role, does such an uncanny imitation of his famous older brother that you can just pretend MOVING VIOLATIONS actually is a Bill Murray movie and enjoy it as such. 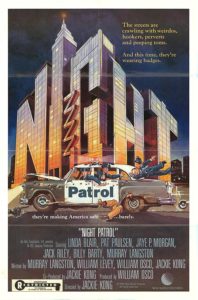 The crazy 1980 slasher flick THE BEING marked the debut of writer-director Jackie Kong. It co-stars Murray Langston, aka “The Unknown Comic,” a ’70s TV sensation who told jokes on THE GONG SHOW with a paper bag on his head. Immediately after that collaboration, Kong and Langston created  NIGHT PATROL, a film so breathtakingly shameless that its tagline implies it’s not an imitation but an actual sequel to a certain other comedy smash: “They were trained at the POLICE ACADEMY. They were toughened on the streets of Los Angeles. Now they’re ready for NIGHT PATROL!”

Linda Blair stars as a seasoned cop who’s teamed with Langston as a screw-up officer who moonlights as a comedian that tells jokes with a paper bag over his head who also calls himself “The Unknown Comic.” So it’s a weird meta-fantasy of Langston’s own rise to fame (or at least being famous enough to star in NIGHT PATROL) and it’s loaded with AIRPLANE!-style gag-a-minute laff-attacks, many of which admirably blast through the line separating “vulgar” from “vile.” NIGHT PATROL is a gas—and if you want to take that as a nod to dwarf superstar Billy Barty knockout performance as a police captain who suffers chronic flatulence, whiff it up. 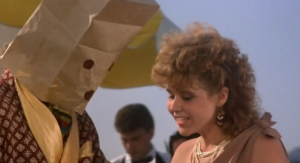 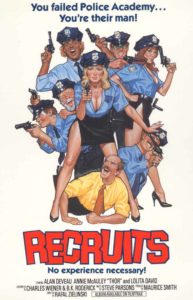 With RECRUITS, director Rafal Zielinski doesn’t quite out-insane POLICE ACADEMY the way his SCREWBALLS movies did with PORKY’S, but it certainly gives it the ol’ outrageous Canuxploitation try, and goddamn if it doesn’t generate more bona fide crack-ups than anything in the official POLICE ACADEMY canon. Anvil-faced stand-up comic Mike McDonald (ODDBALLS) sets the tone as the crooked police chief of Clam Cove. He aims to take over his boss’s job by intentionally hiring the most inept officer candidates possible. Among them is a lobster mascot, a buxom airhead, a sex-addicted ice cream man, a teenage prostitute, and heavy metal movie god Jon Mikl Thor (ROCK N ROLL NIGHTMARE). 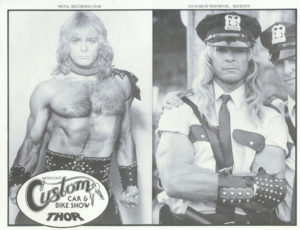 Parker Stevenson (one of TV’s THE HARDY BOYS) is the head cut-up (in every sense) of a madcap medical school run by dictatorial dick dean Eddie Albert. In the opening scene, Parker and his two sidekicks traumatize an autopsy class by rising from operation tables in corpse make-up, then running naked all over campus while making Three Stooges sounds. It’s awesome. The rest of the movie’s pranks and peeps maintain pace from there. Will STITCHES leave you in them? Just posing the question is its own answer. 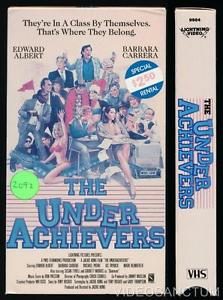 In atomic impact terms, if Jackie Kong’s NIGHT PATROL is her Hiroshima, then THE UNDER ACHIEVERS  is her Nagasaki: it’s the less automatically inferred of her two POLICE ACADEMY rips, but it still slays like fuck, and, frankly, an analogy that tasteless is perfectly in keeping with Kong’s sense of humor. Edward Albert stars as a ne’er-do-well business scion who cuts a deal to stay out of jail by going undercover to bust a drug ring operating out of the world’s worst night school. Ethnic stereotypes, a prom queen in drag, and some improbably elaborate stunts highlight the ha-ha’s. 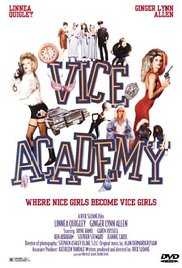 Just as BEVERLY HILLS COP begat several years of movies with BEVERLY HILLS in the title, POLICE ACADEMY—and not, to be sure, UP THE ACADEMY—brought about THE PRINCESS ACADEMY (1987) HONEYMOON ACADEMY (1989), and VICE ACADEMY (1989). Only the last is an actual POLICE ACADEMY imitator, and it certainly makes that status count. Scream queen Linnea Quigley, once-and-future porn star Ginger Lynn, and B-movie spitfire Karen Russell co-star as public morals police officers-in-training who get dispatched to rack up ten arrests among Hollywood Boulevard’s pimps, sex pros, and kink peddlers in order to graduate. VICE ACADEMY earned the highest ratings in USA UP ALL NIGHT history and, extending its POLICE ACADEMY connection, whelped forth five sequels. 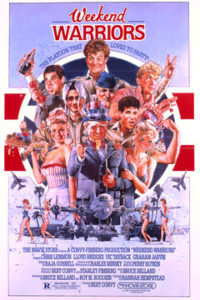 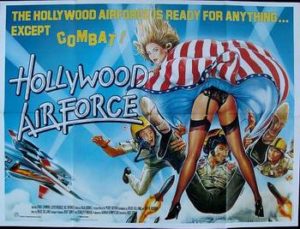