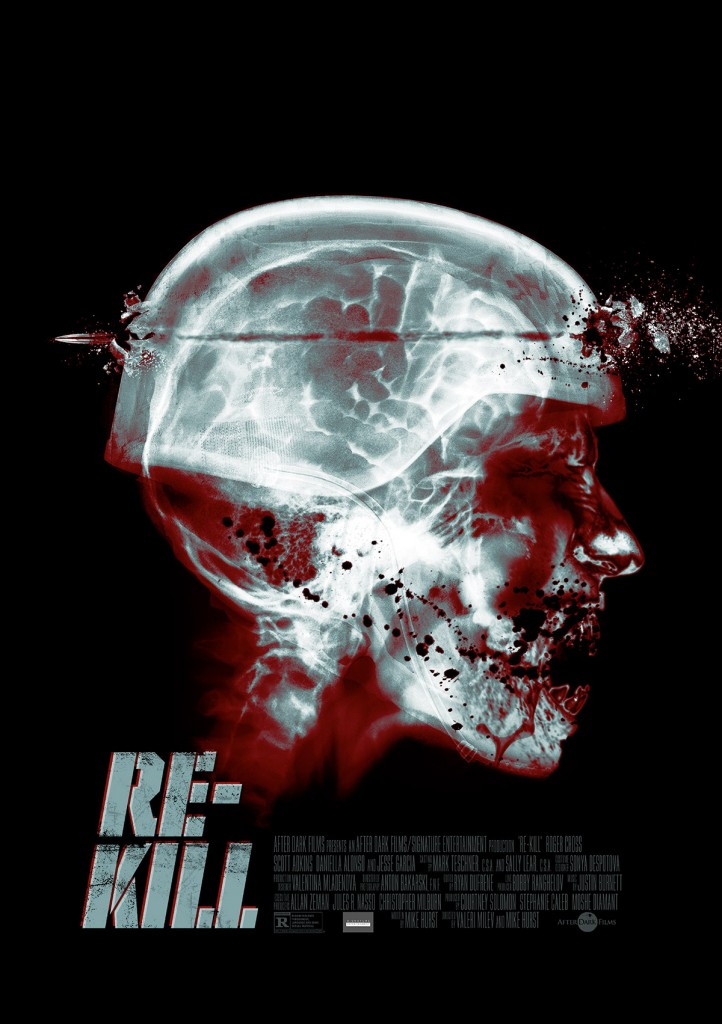 In a genre over-saturated with low-budget zombie films, I would imagine that it would be extremely difficult to stick out from the rest of the pack. It seems as though every possible plot, gimmick, and style has been used. RE-KILL has found a cool and effective way to set itself apart, in that the whole movie is set up like a television show which is taping five years after the zombie apocalypse.

“RE-KILL” is actually the name of the “Cops”-style television show where special forces known as the R-Division are sent out to clear areas of the undead, or as they refer to them in RE-KILL, “Re-Ans.”

It’s funny — I’ve always wanted to see this movie. A lot of zombie films have some sort of political subtext. 1968’s NIGHT OF THE LIVING DEAD dealt with racism and the Vietnam war, and 1978’s DAWN OF THE DEAD was about consumerism, but I always wanted to see a zombie film after the infestation has been under control, from the point of view of those willing to go into infected areas and risk their lives to protect those that want to turn a blind eye away from evil that is out in the world.

RE-KILL is very action packed: The zombies are very fast, running zombies similar to the kind you would see in 28 DAYS LATER. The scenes where the R-Division are battling the zombies is frantic, and seems very realistic to a real gun battle or war.

The characters of the R-Division are introduced in a reality tv show style, each one telling their name and a little bit about themselves. Winston (Bruce Payne) is a hard-nosed son-of-a-gun that believes this is God’s wraith against humanity, and feel that it’s his duty to help rid the world of the undead. Tom (Layke Anderson) is a rookie, he’s not afraid but visibly nervous, and understandably so. The rest of the crew are your typical veteran badasses that you might see in a cop or war movie.

Even though the characters come from different walks of life, they have all bonded as a team: everyone from ex-military, to gang members, and the cast all do a great job letting their characters shine through even through extreme violence. Most interesting, I think, is the character only known by Sarge (Roger R. Cross). He definitely leads you to think he is either ex-military or a police officer, but when they reveal his back story as family man, you realize these are all just regular people doing what they feel is right, what they feel needs to be done.

Being as though “RE-KILL” is a television show, there are also commercials interspersed throughout the film. The commercials are a cool tool to show that the future society has acclimated to the zombie apocalypse. Public service announcements encouraging people to have sex to repopulate America are great as well. It felt genuine.

Besides the commercials, to give RE-KILL the feel of a television show there are also news breaks from the ONC (Outbreak News Channel). As a little comic relief, there is “Survival Week,” which is another reality show’s clips of people talking about what they were doing when the outbreak started.

During the R-Division’s clearing the undead they hear of the Judas project, an underground project that was supposed to turn the undead against each other, but it back fires. The squad have to enter the most infected area known as “The Zone.” Things get crazy. There is lots of gun fire, gore, and zombies munchin’ and crunchin’… it’s pretty awesome.

I usually can’t stand found-footage style films — that being said, RE-KILL is has used the found-footage style in a very unique way, one that doesn’t seem tired and one which I actually found enjoyable. Instead of just a bland excuse of why someone was filming everything, RE-KILL is shot from the point of view of the  film crew for the aforementioned “Cops”-style television show.
I look forward to see what else comes from director Valeri Milev. A feeling of authenticity was captured here and held my attention. RE-KILL is a zombie movie for zombie movie fans who think they have seen it all. Definitely RECOMMENDED!