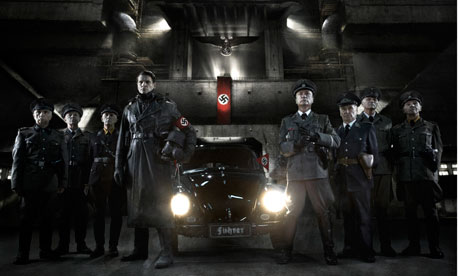 Renate Richter: Julie Dietze
James Washington: Christopher Kirby
Vivian Wagner: Peta Sergeant
Wolfgang Kortzfleisch: Udo Kier
Entertainment One Pictures Presents A Film Directed By: Timo Vuorensola
Written By: Johanna Sinisalo, Jarmo Puskala
92 minutes
Rated R
The first teaser for IRON SKY appeared online so long ago that it feels as though it was part of a different world. Popping up on YouTube in May of 2008, the two-and-a-half-minute initial teaser for the sci-fi flick with the simple high-concept premise of “Nazis on the Moon” excited fandom in a different time, a time when George Bush was president, we were looking forward to the new INDIANA JONES movie and everyone knew that “Lost” would come together in the end. We were so innocent then, carefree souls who figured that this genuinely beautiful teaser would be the sign of a jaw-droppingly spectacular action spectacle, mixing traditional science fiction design with the look of Nazi fascism in a film that would come off like a pulp masterpiece.

Now, four years later, we find that we were right to be excited. Sort of. 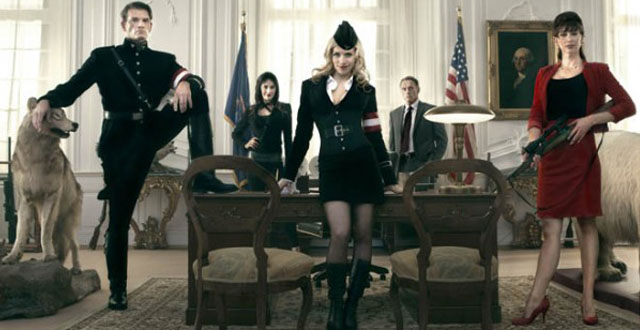 In retrospect, it should have been obvious from the beginning that IRON SKY would not be an epic tale of adventure in an alternate history to sit aside the likes of WATCHMEN or Ian McKellen’s version of RICHARD III from the first teaser. While much of the clip emphasizes the stunning production design on the vintage-influenced spacecraft and swastika-shaped fortress, it includes with a pigeon idly taking a dump on the imperial eagle. That, coupled with the fact that director Timo Vuorensola is most well-known for his series of “Star Trek” parody films, really should have clued us in the filmmakers’ tongues were at least in cheek, if not being violently thrust through them.
And as subsequent trailers suggested, IRON SKY is more of a satire with a dystopian sci-fi edge than an action/adventure film, though the production design remains just as impressive as it was four years back. The film begins in the year 2018, atmospherically enough, on the moon as a pair of United States astronauts land and soon discover a community of Nazis, led by Fuhrer Kortzfleisch (the ubiquitous Udo Kier), that fled the Earth in 1945 and plan to retake their motherland. While one of the astronauts is killed, the other, a black model named James Washington, is captured in order to help them procure additional information on the planet for them to power up their giant battle spaceship for the final conflict.

Those waiting for the battle scenes promised in the initial looks have some time to kill, as much of the film follows Nazi conspirator Adler, his master race-determined female partner Renate Richter, and Washington, turned Caucasian by Richter’s scientist (and Einstein lookalike) father, as they travel to Earth to begin their conquest. The trio split up quickly, as Adler plots to take over the Nazis and the world, Richter soon finds her peaceful ideas of what Nazis stand for destroyed, and Washington wanders around, a disheveled, insane-looking albino shouting about moon Nazis.

Kortzfleisch soon becomes involved with the re-election of an unnamed female president, who bears a striking resemblance to author Sarah Palin, the mother of reality star Bristol Palin. (Why there would be a re-election in 2018 is anyone’s guess – one imagines that the senate quickly changed the rules of presidential elections as soon as she was nominated. Eventually, the old Fuhrer shows up to take control again, power shifts, and characters make their way back to the moon for the final conflict. 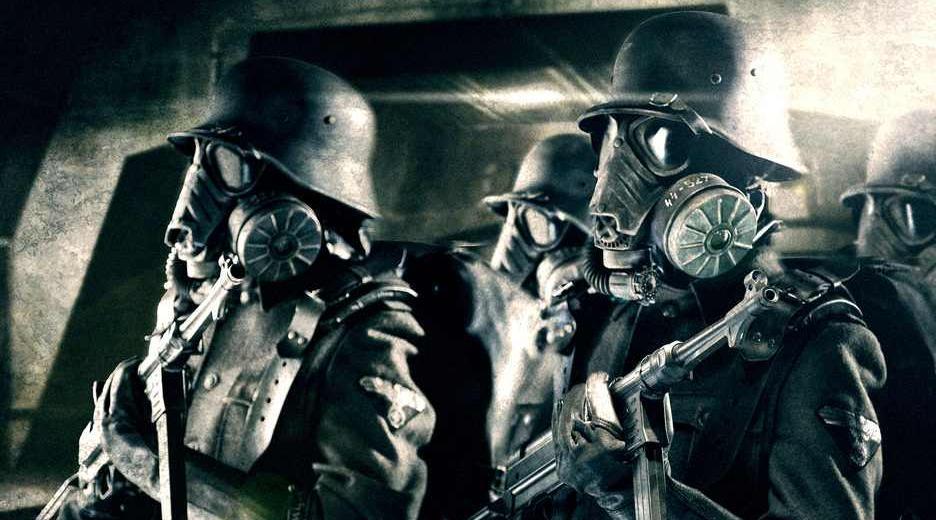 In the finale, we finally get the epic battle of Space Nazis vs. The World that we’ve been waiting four years for, but for some reason, the results are a bit anticlimactic. While the visual effects are effective and there’s something genuinely great about watching a giant zeppelin explode in space, the tone of the huge dramatic moments never quite feels as exciting as it should, with Laibach’s score, appropriate during a majority of the film, never swelling to the point where you feel as though the actions on the screen are as tense as they should be. It’s not that every climactic scene in a movie has to be punctuated to the level where anyone even paying vague attention should know when the important parts are happening, but when you’re dealing with a movie that features MOON NAZIS, you might just want to rev up the melodrama.

Thankfully, while the climax is mildly bungled, the rest of the film is entertaining enough to be worth a look, even if it’s all build-up and minimal action. The humor is genuinely funny a good percentage of the time, and the filmmakers deserve credit for the fact that the Palin surrogate doesn’t feel like a completely dated archetype when it easily could have been – it’s a bit like having a character based on Ross Perot and expecting the satire to seem fresh. The scenes in the United Nations are a lot of fun as well, and the actors do a decent job of playing it straight so that the humor comes naturally rather than feeling forced.

One of the odder things about IRON SKY is how much of an exploitation film it isn’t – the Nazi influence is mostly in the form of the production design, costumes and the fact that the lead Nazi is a duplicitous jerk. There’s virtually nothing in the way of torture save for Washington’s “aryanizing,” and you’d find more mention of the Holocaust in Mel Gibson’s father’s chain e-mails, resulting in a strange PG-13 version of Nazis, one more suitable for a kid’s pulp matinee than an homage to drive-in films. The satirical stabs at fascism are mostly limited to side gags, with more shots being levied at the idea of American imperialism, but there’s nothing here more pointed than a particularly political “Saturday Night Live” sketch.

No, IRON SKY is not the movie that everyone had in their heads when they first saw the initial trailers, and thought this could be the movie that SKY CAPTAIN AND THE WORLD OF TOMORROW should have been. Instead, it’s a solid little satire with some impressive-looking set pieces that doesn’t have a sadistic bone in its body, and that’s not a bad thing at all.