JACKALS starts in POV, as we creep along an alleyway into a normal suburban house and into the bedroom of a middle aged couple — who we see brutally slaughtered in front of our eyes.We then move into the bedroom of a teenage girl, who clearly knows who we are…before meeting a similar fate as her parents. This, of course, evokes the opening of HALLOWEEN, as little boy Myers prowls through his home to fillet his older sister and her boyfriend, and Kevin Greutert knows this. Any film that opens with a POV bloodbath prologue is risking accusations of straight up ripping off John Carpenter’s steez, but Greutert doubles down, attaching that prologue to a home invasion/siege thriller that often feels like something the legendary director made in his prime.

Greutert knows his horror films. He was the long time editor of the SAW franchise, and even directed one of the best entries in the sixth installment. His post-SAW efforts JESSABELLE and VISIONS weren’t able to transmute effective atmosphere into effective films, but JACKALS has the director energized, making a throwback to classic Carpenter without falling into the trap of being a soulless checklist of homages. Much like Carpenter, Greutert’s film is an unfussy, meat and potatoes thriller, the kind of film that’s usually made nowadays with either an eye towards ironic mockery or bland conventionality, not simple skill.

Right after the POV opening, we cut to a family — yuppie son, a young woman with a baby and a distraught looking Deborah Kara Unger — standing around a cabin in the woods, looking concerned, waiting for…someone to arrive. Then we cut to a pair of greaser types driving around when their tire blows out. As they attempt to change it, a van pulls up next to them, and a pair of balaclava clad thugs kidnap one of them. It turns out they are not thugs at all: one of the them is the man’s father (Johnathon Schaech) and the other Jimmy (Stephen Dorff), an ex-military cult deprogrammer who is leading an intervention to break the young man (Ben Sullivan) from the grips of a cult that have brainwashed them. 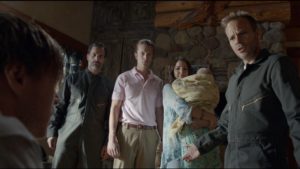 No points for guessing what happens next. Much like THE VOID earlier this year the cult — that where jackal masks, hence the name — surround the home. Young Justin warns them that they will pay –and the night of course devolves into an ever escalating series of parries and thrusts, as the jackals attempt to break in and the family fights back and attempts to escape.

Look, here’s the thing: JACKALS is not an original movie. It doesn’t really deviate from its formula. Or do anything we haven’t seen before. It is, at its heart, a basic siege flick, and anyone looking for some new, subversive twist on the formula, for Greutert to shake a subgenre that has become increasingly moribund in the near decade since THE STRANGERS brought it back screaming on to the screen is going to be disappointed. This is not some new genre classic. What it is something that has been becoming increasingly rarer: a plain old solid, fun, unpretentious horror film. 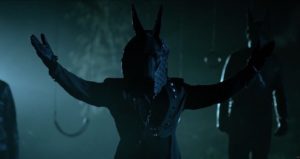 In an era when nearly every other horror film is just straight up blatantly fetishizing the most superficial elements of ‘80s style, or they are minimalist to such a hipster “indie cred” degree that they barely feel like half-formed thoughts instead of films, or they deliver the expectant cliches in the most ham-handed, take the money and run manner possible, it’s nice to see people make a thoroughly enjoyable ride. None of this is taxing to watch, and of the recognizable names only Dorff really gets a role to bite into — Unger and Schaech are mostly asked to look concerned and occasionally hit back at an intruder — but Greutert handles it with verve and skill, delivering on a clean, tense thrill ride.