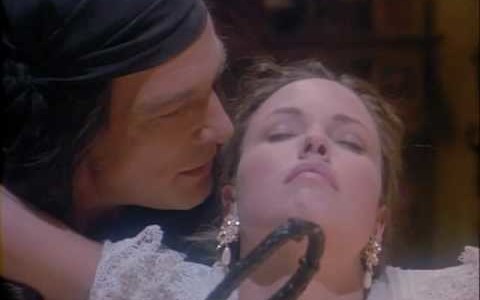 In my late twenties, I went out on a date with a young lady from the Chicago suburb of Northwest Indiana. She was an exotic dancer whose stage name was Raven and she owned a hearse, so you know exactly what she looked like. She and I met on a website that catered to, lets say, fringe sexual interests and we shared a mutual love of horror films (as if the hearse wasn’t a dead giveaway). Doing as suburbanites do, we had dinner at a Red Robin and a nightcap at Chili’s. The subject inevitably turned to when did you first figure out that your sexual interests didn’t necessarily fit squarely in the norm. Her answer?

When she saw a film called WAXWORK.

WAXWORK was given a limited theatrical release in June of 1988 and put out on home video that same year by Vestron Video. A clever blend of horror and comedy, WAXWORK paid a new wave tribute to horror films of the past, featuring a crew of snobby college students who are offed one by one as they enter the displays at a mysterious wax museum. Each kill takes place in a tribute to different horror films and villains, including Count Dracula, NIGHT OF THE LIVING DEAD, The Mummy, and a cabal of scoundrels and sinners. Writer/director Anthony Hickox struck the right blend of horror and meta-comedy, and the film was a moderate success garnering two comic book adaptations and a sequel in1992. One of the most memorable sequences in the film—the one that my date was referring to—was when Deborah Foreman’s character Sarah is lured into a wax display depicting the Marquis de Sade. 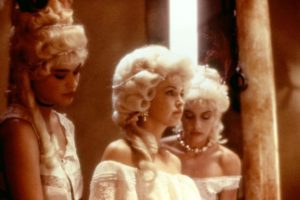 In the film, Sarah finds herself perpetually drawn to the Marquis. Upon their first visit to the museum, she stands transfixed by the display featuring de Sade, whip in hand and surrounded by lackeys and prostitutes, awaiting his next victim. Later in the film, Foreman’s character attempts to open a book of de Sade’s writings—which combined philosophy, pornography, blasphemy, and violent sexuality—before being distracted by Zack Galligan’s Mark. The Marquis De Sade did not negotiate nor did he regret in his writings, but his influence on modern BDSM remains. Seventy-five years later, von Sacher-Masoch introduced the concepts of consent, negotiation and contract, which is the basis for the modern kinkster philosophy of “Safe, Sane, and Consensual.”

The scene itself straddles the line between fear and eroticism, similar to the way Hickox balances comedy and horror. Hickox is quite deft at this balancing act and the foppish behavior of the de Sade and his cronies provide an otherworldly sense of time and place, recalling the erotic horror films of Jess Franco and Jean Rollin. There is a lurid sexuality present in the scene: nobody in REALLY wants to be shackled and beaten until they expire, but for some folks, it’s just a hot little fantasy. When the Marquis proclaims, “he’s never seen a girl take so much,” it’s implied that Foreman’s character is truly enjoying the taste of the whip. The sequence in no way advocates violence against women—although the damsel in distress trope certainly is utilized to move the plot along—so much as it slyly suggests that everyone has their own fantasies, and even the cute yuppie in training may have a sleazier side. 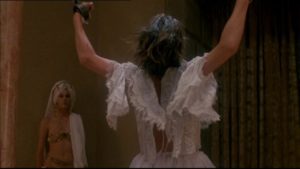 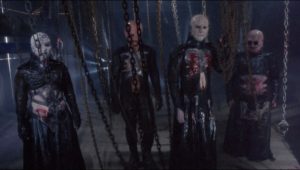 It would appear that even the most liberal of the liberal who advocate for every alternative lifestyle (even the groan inducing “sapiosexual”) still seem to think that kink is “icky.” It appeared that kink was going to become more culturally acceptable when FIFTY SHADES OF GREY became as popular as it did, but those books and films continue to perpetuate the myth that if someone is into BDSM that something has to be wrong with them be it they were abused or have some sort of mental health issue. Even one of my favorite films of 2014, THE DUKE OF BURGUNDY trotted out this outdated concept and the same is implied in the most basic of kink-centric films, SECRETARY. While that may be true some of the time, a lot of us are just perverts who think that sex should be fun—and sometimes involve costumes and props. As Lover’s Lane states on their website, “the couple that plays together stays together.” That said, as someone who exists on the outer rim of the kink scene, it pleases me that kink still exists under a shadow of sleaze. In a world where everything needs to be accepted by the mainstream and kink still remains cultish and weird. FIFTY SHADES is fine and all, but my particular fantasies involved a participant who’s actually into it, and I’m not sure Anastasia Steel is. 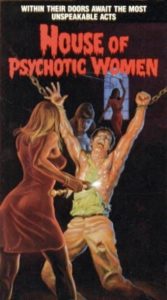 There has always been a through line between kink and horror Advertising materials for genre pictures throughout the decades have exploited images of women (and in the case of HOUSE OF PSYCHOTIC WOMEN men) in various states of undress and duress, shackled and on the verge of torture. Exploitation was not just a clever name for this brand of cinema and films like HOUSE OF WHIPCORD, WHIP AND THE BODY, and OLGA’S GIRLS promised scantily clad boys and girls engaging in various S&M activities. For those with a much more specific kink, ILSA, SHE-WOLF OF THE SS and the glut of ‘70s “nazisploitation” movies provide enough sex, violence, and women in stockings and uniforms. It was video boxes like this that appealed to me as a young man.  Don Draper said, “Advertising is based on one thing: happiness. And do you know what happiness is? Happiness is the smell of a new car. It’s freedom from fear. It’s a billboard on the side of a road that screams with reassurance that whatever you’re doing is OK. You are OK” That’s what those video boxes and WAXWORK did for me; they let me know that I wasn’t alone out there when it came to sex. It apparently appealed to some other perverts on the south side of Chicago as my local video store carried ALL of these movies. Somebody was renting them. It also helped when I found out all the girls in junior high were really into V.C. Andrews because that stuff was WEIRD! The book fair posters featuring bikini-clad women sprawled out on Ferrari’s were certainly alluring, but heels, stockings, and leather tempted me even more so. Everyone has a different story about how they became interested in kink: they were spanked as a child, they weren’t spanked enough as a child, they enjoyed being tied up during cowboys and Indians more than the other kids.

For me, it was horror movies, but course it was, right?