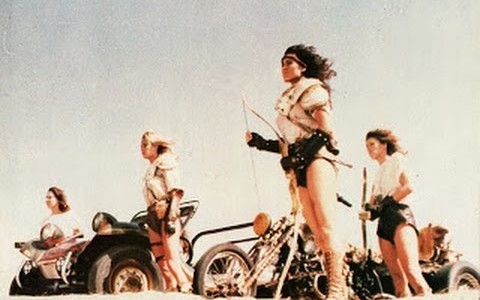 The flood of post-apocalyptic ROAD WARRIOR knock-offs that littered the cinematic landscape in the early ’80s  definitely gave us some bizarrely awesome shit like THE NEW BARBARIANS and 2020 TEXAS GLADIATORS, but once anybody besides the Italians were in charge, the results were rather putrid at best. 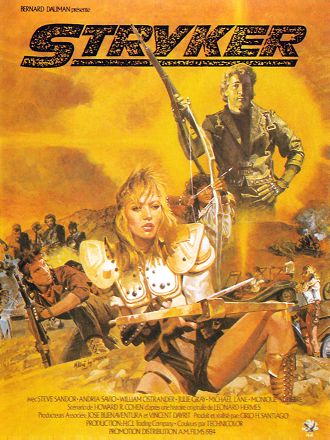 Now, I’m predisposed to liking any flick with a title this fucking cheesy, but I gotta admit that STRYKER begins to test your patience almost from the word ‘go.’ The voice-over narration that begins the film pretty much gives the whole game away — the nukes flew, everything’s fucked, lawlessness reigns supreme, and the rarest and most valuable commodity in the world is water — this despite the fact that there are clouds in the sky throughout the film, so presumably, at some point, it’s gotta, you know, rain.

It’s pretty obvious from the outset, though, that logical continuity isn’t one of STRYKER‘s strong suits, so any prospective viewer might as well get used to its absence quickly. 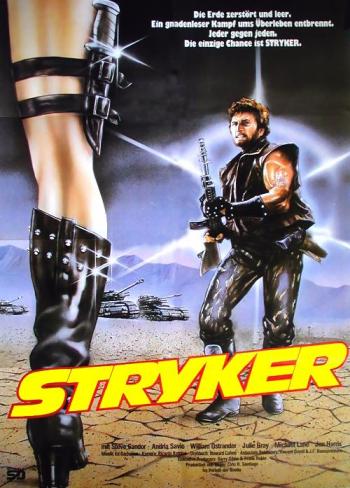 After our little voice-over-monologue-as-the-bombs-go-off intro, we’re dropped right into the middle of the “action” as some supposed-to-be-bad-ass-looking thugs in souped-up junker cars and on souped-up-junker motorcycles chase down a helpless woman on foot who’s got some water and, more importantly, apparently knows where even more can be had. She’s rescued from her would-be attackers, though, by a dude in a cowboy hat with a rifle slung over his shoulder and some other guy.

At this point, it would be nice to know a few things : who are these two dudes? Is one of them the “Stryker” of the film’s title? Are they working together? If so, why? Do they have a history together? We find out the answer to the first question, but as for the others, well, that stuff is never really made clear. 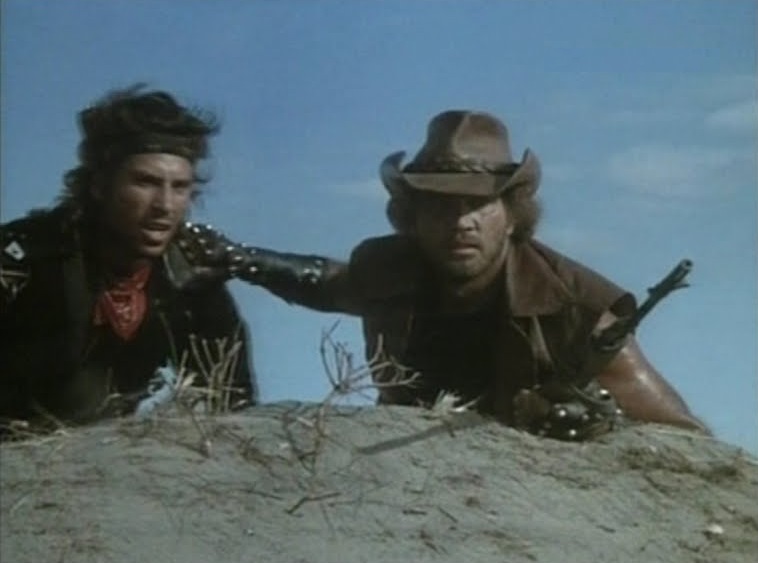 The damsel in distress takes off in one of her vanquished foes’ cars and we soon learn, more through inference than anything else, that the dude in the Stetson with the rifle slung over his shoulder is, indeed, this “Stryker” guy that we’re supposed to give a shit about (although “star” Steven Sandor’s seriously flat performance makes that pretty difficult — his Stryker seems to suffer from a rare psychological affliction that renders a shell-shocked survivor of a nuclear conflagration incapable of expressing any emotion — or even any mood, for that matter — whatsoever.  Must be some variation on PTSD, I’m guessing). He then walks off  and —

Wait. I have to pause for just a second here. The first clue that Stryker is a seriously second-rate post-atomic-holocaust action hero is his means of transport. While guys in other films of this genre tend to have bad-ass cars or bikes, Stryker roams the irradiated wastelands on foot. Dead giveaway that we’re looking at a pretty lame “hero” right there. Next up, Stryker and his (apparent) buddy, who we learn waaaaaayyyy later is named “Bandit,” encounter a tribe of dwarves who are pretty much dressed, and pretty much speak, just like the Jawas from STAR WARS — the only thing missing is the hoods and the glowing eyes. Stryker makes friends with these lovable little creatures by giving one of them some water, and of course that’s gonna come in handy later when he needs to assemble a makeshift army to take down the bad guys and set the people of post-nuke Earth free.

Whoops, hope I didn’t just give too much away there.

Then we’ve got a series of confusing scenes that I’ll just run down quickly to avoid you, dear  reader, any unnecessary pain (and because actually explaining what any of them have to do with anything is pretty well impossible ): the girl who Stryker rescued is recaptured, stuck in a cell, raped, and tortured for information. The bad guys are lead by a low-rent Sid Haig-wannabe named Kardis ( although, again, it’s a little while before we actually learn his name), who is informed that the girl got away from the leather-sporting ruffians the first time around because they were “ambushed by Stryker and his men.” Except Sryker doesn’t have any “men.” Again, continuity is not a selling point here. When learning of Stryker’s involvement in the girl’s rescue, Kardis has a memory flash-back to an earlier fight with our Stetson-sporting hero, the significance of which is never explained (and you can’t really tell what the hell is going on anyway).  Stryker and his “man” are observed by a pack of quasi-dangerous-looking Amazon she-devils on wheels who carry crossbows. They don’t do anything and Stryker doesn’t see them, so… whatever. 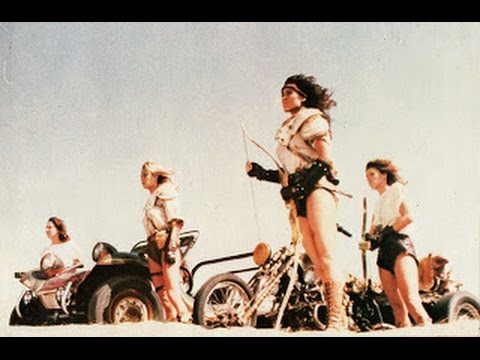 Stryker and Bandit find a working car sitting out in the middle of nowhere (apparently the entire film was shot at a Filipino mining works — they get a “shout-out” in the credits, and it’s quite apparent, as the exact same locales are utilized over and over again as supposedly “different” places, that the movie’s crew didn’t have access to the entire quarry). Then our “heroes” attack an armed convoy escorting a tanker, not that we find out what’s actually in the tanker or why they’re attacking it until a lot later, and by then you don’t give a damn anymore because, well — you never really did in the first place. We also learn that, thanks again to zero emphasis being placed on continuity, Stryker’s cowboy hat can appear and disappear from atop his head from one moment to the next. 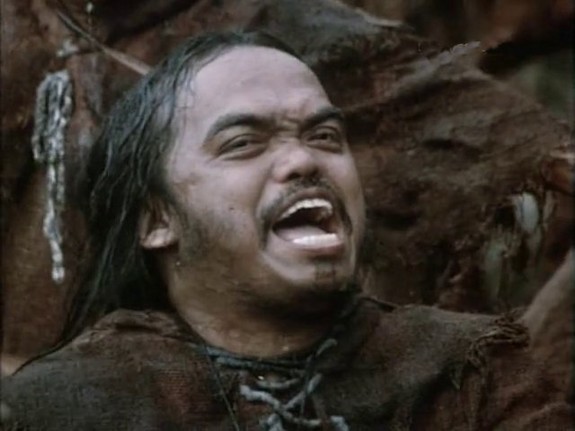 Things start to threaten to actually make a bit more sense once Stryker and Bandit head for an encampment of survivors lead by a guy named Trun (Ken Metcalfe), who we meet earlier while he’s buried up to his head in sand by Kardis’s men (yes, Kardis, for his part, really does have “men”) and gets a “golden shower” from one of them when he complains of thirst. Oh, and he also just so happens to be Stryker’s (much) older brother, and they’ve got a history of sorta-bad-blood between them, as evidenced by sparkling dialogue exchanges like this one:

Trun: But why did you leave?

Stryker : Everybody’s got their own road to hell — you’ve got yours, I’ve got mine.

Well, that explains everything, then.

Never fear, though — Stryker has a plan to lead Trun and his people to freedom — and more importantly, to water. Having sprung the girl he rescued earlier (I’m pretty sure we actually NEVER get her name at ANY point, but it doesn’t really matter a whole lot anyway), they head out for her father’s encampment, where the “locals” are  guarding a secret underground spring they’ve found that provides them with an endless supply of water. There’s a little bit of “drama” once they get there, with the daughter and the old man having divergent views about sharing their liquid wealth (she’s the generous sort, he’s a little more hesitant — in fact, they found this spring seven years ago and he promised Trun at the time that he’d share water with him and his people if his lot ever found some, and he welched on the deal), then Trun starts to try to turn the camp into an armed garrison under martial law with himself as commander, much to Stryker’s chagrin (being the freedom-loving “loner” type that he is), and Bandit meets himself a nice girl and gets laid.

That’s all window dressing, though — the main point is that we’re headed for a big armed showdown between Kardis’s men, who have a couple of honest-to-God tanks, and the ramshackle band of survivors protecting their spring now led by Stryker (even though he’s not the leader type). The amazons with crossbows and the un-hooded Jawas join up with “Team Stryker,” there’s lots of explosions and guns blazing, Bandit’s new girlfriend gets killed in the closest this movie tries to come to an “emotional” moment, lots of other folks on both sides bite the bullet, and finally Stryker and his band of rebels stand triumphant after vanquishing their much-more-numerous, much-better-armed foes. It can only happen after the apocalypse, people. Kind makes you yearn to let the missiles fly right now, doesn’t it?

Oh, and did I mention that, at the very moment their courageous victory is sealed, it actually begins to rain? Looks like things are gonna be all right after all. If you’re really into torturing yourself, STRYKER is available on DVD. It’s part of the 20-film, 5-DVD “The Grindhouse Experience Volume 2” box set from VideoAsia — and if you think you’ve seen some bad direct-from-VHS transfers before, you ain’t seen nothin’ yet. This, like all the other movies in these two sets (some of which, like RAIDERS FROM ATLANTIS, are actually pretty damn good),  looks like absolute shit. They didn’t even use a particularly healthy-looking VHS tape for the rip, as there are moments throughout where the tracking goes off , and in dark scenes it’s pretty hard to tell what the fuck is actually happening. Not, again, that it particularly matters. Needless to say it’s presented full-frame, and the sound quality is straight mono and it sucks, too.

Finally, a question I would ask Cirio H. Santiago if he were still alive (and let’s not be too hard on the guy — he did give us Jeannie Bell’s topless karate scene in TNT JACKSON, after all): In the end credits, there are two women listed as “script continuity girls.” What did they actually do?