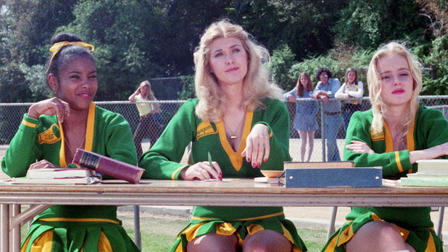 There is sort of sad nostalgia about my relationship with the drive-in theaters of the 1970s, especially when it was married to my recent acquisition of a driver’s license. This was the beginning of personal freedom — my friends and I piling into the family station wagon and heading out to the Skyway Twin on the weeknight, where an entire carload could get in for one low price. This is where I saw TEXAS CHAIN SAW and TORSO on a double bill, but it was also where we were sure to see those other magical R-rated movies, with titles like STUDENT TEACHERS and NIGHT CALL NURSES. I should say especially sure, because these were important to my budding, frustrated, and often confused sexuality. 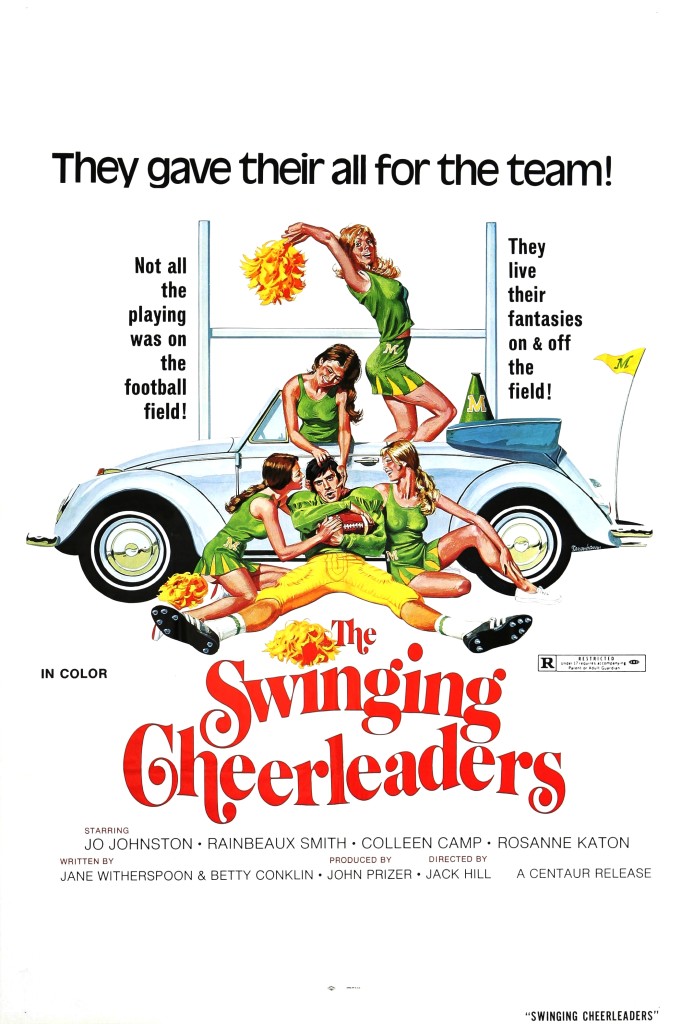 I was reasonably confident I had seen THE SWINGING CHEERLEADERS at some point during this era, when my life was full of possibilities and my own innate superiority.

When I found out that Arrow Video was prepping a 2K restoration and Blu-Ray, I knew I would have to try and re-capture that brief window of time – although this time, I would be doing it without hollow sound blaring from a metal speaker hanging on the driver’s side window, without the humidity of a hot Texas night, and without the smell of a burning coil of Pic® Mosquito Repellent. All of these are highly overrated.

Did you know these sonsabitches were still being made? I did not!

It turned out I actually hadn’t seen THE SWINGING CHEERLEADERS. I probably would have remembered it better if I had, because director Jack Hill delivers an actual movie.

Mesa University is having a great football year, thanks to star quarterback Buck (Ron Hajak). The cheerleader squad, though, is down one girl, and who should show up to try-outs but Kate (Jo Johnston), who wants into the squad to research her term paper on “Female exploitation in contemporary society”, which her boyfriend The Campus Radical Ron (Ian Sander) also wants to run in his underground newspaper. Kate is going to find out that Buck is, under his swaggering front, actually a nice guy, and Ron, under his progressive front, is a sniveling weasel. That’s not much to hang a movie on, so the Coach (Jack Denton), Dean Putnam (George Wallace) and math instructor Professor Thorpe (Jason Sommers) are rigging the games to make a fortune in gambling, which makes a much better exposé for Kate, since she’s also found out even cheerleaders can be worthwhile people.

Well, except for Mary Ann (Colleen Camp), the leader of the squad who hates Kate, because Buck is her boyfriend. Oh, and also she’s the daughter of Dean Putnam. And we haven’t yet mentioned Lisa (Roseanne Katon), our token black cheerleader, who is dating the very-married Prof. Thorpe. And then there’s Andrea (Cheryl Rainbeaux Smith), who is dating running back Ross (Ric Carrott), but can’t bring herself to lose her virginity to him. She’s advised by Kate and Lisa to do it with a stranger, and she winds up settling on Ron, who invites some friends over for a gang bang, which leads to Ross beating the crap out of him, and Ron’s subsequent reprisal against cheerleaders in general and Kate in specific.

Now, you are thinking, this is an exceptional amount of plot for a T&A drive-in flick, and you are absolutely correct. In the third act, the trio of faculty gamblers decide Mesa have to lose the big game to State to really clean up, and the uncooperative Buck has to be kidnapped – at this point all those subplots go away in favor of low-budget slapstick action. There is a certain amount of grousing online about this movie, and that is at its core: there’s some nudity from our three main cheerleaders (sorry, Colleen Camp fans, villains don’t get nude scenes), and a whole lot of interpersonal relationships. Like I said, Hill delivered an actual movie, not an excuse for my teenaged self to ogle nekkid women. My middle-aged self is reasonably okay with this.

That cravat deserves its own credit.

What I tend to be more interested in this Internet age (where it is ridiculously easy to see nekkid women) is the nuts and bolts of filmmaking, and watching THE SWINGING CHEERLEADERS allows you see a man who was a master at artful efficiency at work. Arrow Video has Jack Hill on the commentary track, and it is a beautiful thing to hear him talk about directing. He points out which scenes were achieved by simply dressing up a corner of the soundstage (it’s quite a few, including one where they didn’t even bother to throw up some flats), why pacing is so important to a movie, his history with the crew and actors. THE SWINGING CHEERLEADERS was shot in twelve days, which is extraordinary – even AIP generally went to eighteen. The sharpness of the new transfer allows you to note that the teams’ practice uniforms are turned inside-out to obscure a real team’s logo, and follow background props as they magically move from location to location. That was a really popular brand of hot plate in 1974, it seems.

Our heroes and heroines are all young and personable – it’s surprising to note that this is Jo Johnston’s sole credit. Colleen Camp is still acting (last seen in Aquarius), Roseanne Katon went on to become a Playmate of the Month and was acting up through the 80s. Rainbeaux Smith, so winning and vulnerable as Andrea, we lost to heroin and hepatitis. The bad guys – all adults, and outsiders to the intended audience, are cartoonish at best, but in the Nixon years, that is what we urgently desired: bad guys that could easily be defeated by good clean Americans.

There’s also a new interview with Jack Hill in the extras, 83 years old and sharp as a tack. I sincerely hope he’s writing his memoirs. THE SWINGING CHEERLEADERS was made after his back-to-back successes with COFFY and FOXY BROWN; this was his shot at avoiding being typecast as ‘The Blaxploitation Director.’ He hasn’t made a movie since 1983’s SORCERESS – from which he removed his name. And that is a shame. Hill could have made it as a director of “A” movies easily, though I suspect he didn’t want to give up the creative freedom which small-budgeted fare allowed him. THE SWINGING CHEERLEADERS isn’t his best movie, but it’s a solid one. The Blu-Ray is deserved, if only to hear a legend talk about his craft.

I mean, look at that. That is GORGEOUS.

The most amazing thing for me about that Arrow disc (past the Hill commentary)? As ever, the cover art is reversible, so you can have the movie poster on front, which is my usual preference. This time, though, that cover art by Graham Humphreys is so good, I’m leaving it as is. 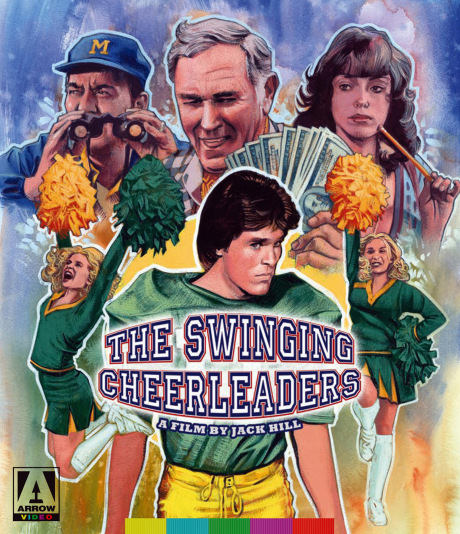 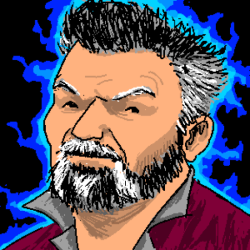