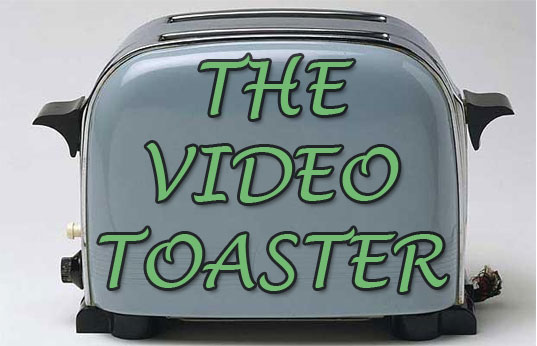 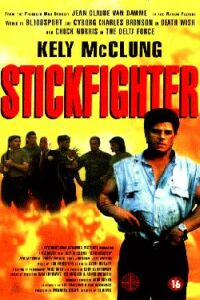 This little seen actioner from director/stuntman BJ Davis (LASER MISSION) feels like the sort of movie aliens who have only ever read about action movies in Black Belt Magazine might put together. Everything about it is a hilarious jumble of cliches, but arranged with such enthusiastic incompetence that the final results are as confusing as they are highly entertaining. Surprisingly, this includes the action sequences, which feature a severe lack of stickfighting, but instead include a shitload of lumbering kicks and punches and a seemingly endless array of stuntmen willing to throw themselves over, off and through things.

You might be wondering “who IS this Stickfighter gentleman”? Why, it’s martial arts master and human scarecrow Kely McClung, who looks as uncomfortable delivering his (still impressive) array of spin-kicks as he does delivering painfully dramatic dialogue about the increasing danger in which he finds himself. You see, McClung is John Lambert, a cop who quit the force after seeing his best friend and partner gunned down during a drug bust, and who commits to taking down the local crime boss while simultaneously romancing his partner’s sister. He also reconnects with his former mentor, a Vietnam vet/strip club owner who eventually gets roughed up – and murdered – by the baddies. Dodging bullets, and a skeptical local police force, Lambert grabs his sticks and fights, fights, FIGHTS until all that’s left is a pile of bodies belonging to people who wish they shot before getting within stick-range.

Despite its title, STICKFIGHTER only has a couple of montages of McClung practicing with his sticks, and the sticks themselves only make a few brief appearances during fights. That’s probably for the best, since they are awfully ineffective against pretty much any weapon you can think of. Speaking of ineffective, the hired goons in this movie are some of the most incompetent, approaching Lambert one at a time despite seemingly outnumbering him 100 to 1. Still, they hurl themselves out windows, onto windshields, and into McClung’s fists/feet with admirable enthusiasm.

Despite being one of the few post-Cannon films produced Menahem Golan, STICKFIGHTER has seemingly been almost entirely forgotten, despite being one of the sillier action movies in a decade full of silly action movies. I’m not usually one to call for a so-bad-it’s-good rediscovery, but if you dig DEADLY PREY and the punch/kick fests of the 90s, you’re going to have a very, very good time here. 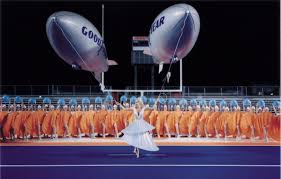 I can’t pretend to know much about Matthew Barney, the sculptor/photographer/former Bjork boyfriend who does the sort of weirdo art installations that don’t usually make their way to small town Ontario. However, I’ve definitely heard of his CREMASTER cycle, a series of films that were paired with his installations named after the muscle which controls – according to Wikipedia – “testicular contractions in response to external stimuli”. Fun!

Anyway, I decided I’d watch the first CREMASTER film, but I fucked up because despite this being called CREMASTER 1, it’s actually the second one that was produced. CREMASTER 4 was the first one, filmed in 1994, because putting stuff in order is for squares. I also watched it entirely separated from the context of the photographs, drawing and sculpture it’s meant to be paired with. Considering Barney has explicitly said he has no interest in releasing the CREMASTER films outside of the context of their installations, it’s probably unfair to be reviewing them at all. Yet, here we are.

So, what is this CREMASTER 1 thing all about? Well, the 40 minute film starts on a striking blue football field, filled with a Busby Berkeley-like chorus line of women. Over the field hangs two large blimps, each containing four stewardesses and, in the middle of each room, a large table on which sits a phallic sculpture surrounded by grapes. Under the table is a pale woman clothed only in white (Marti Domination), who makes a hole in the fabric covering the table and starts pulling grapes into her cell. The woman starts making simple diagrams with the grapes, purple grapes in one blimp and green in the other, which are then played out by the women on the field below. All of this is accompanied only by the ambient sounds of the blimp’s engine.

So, yeah, it’s pretty silly stuff, but certainly visually striking and – thanks to the short length – quite engaging. Your enjoyment of it will rely heavily on your tolerance for this sort of painfully artistic material, but if you’re willing to go along with it – and maybe do a little research ahead of time regarding what the heck it’s all supposed to mean – you’ll likely be able to wring a good time out of the whole affair. At the very least, it intrigued me enough to pursue the rest of the series, which I guess has to be considered a win. 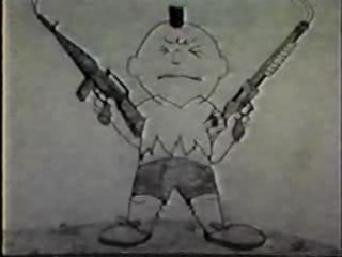 I recall reading about BRING ME THE HEAD OF CHARLIE BROWN as a teenager, as it was part of the underground tape trading market that included things like WINNEBAGO MAN and APOCALYPSE POOH. Of course, nowadays all of those once taboo videos are – for better or for worse – easily available on YouTube, even Steve Vai’s queefing fan (in SFW form). The four minute short, structured like a trailer for a Peanuts TV special, was directed and animated by future SIMPSONS director Jim Reardon, and despite it’s rough, unfinished B&W look, remains damn entertaining for fans – or haters – of Charles Schulz’ Peanuts.

While obviously referencing Peckinpah’s BRING ME THE HEAD OF ALFREDO GARCIA with its title, the trailer itself uses that film’s basic plot as a launching point for a hodge-podge of pop culture references, with the Great Pumpkin putting a bounty on Charlie Brown’s head, leading to increasingly violent attacks from the assorted Peanuts crew – including the kite-eating tree, which attempts to fall on him. Eventually Charlie Brown has enough and, donning a Travis Bickle mohawk, starts mowing down everything and everyone in his way, with the film devolving into a cacophonous montage of violence featuring Dagwood and Blondie, Popeye, Godzilla, and Mickey Mouse.

It’s hilarious, outrageous stuff, and Reardon’s skill for animation is clearly evident despite the often rough looking visuals. It’s also gleefully uninterested in copyright, with Vince Guaraldi classic Peanuts theme on full display, along with vocal “samples” taken from THE WILD BUNCH and ALFREDO GARCIA. Likely never meant for public display, BRING ME THE HEAD OF CHARLIE BROWN is a clear precursor to the sort of anything goes mentality that fuels plenty of YouTube content (when it’s not being torn down by Content ID claims). Definitely worth your time. In fact, here it is: