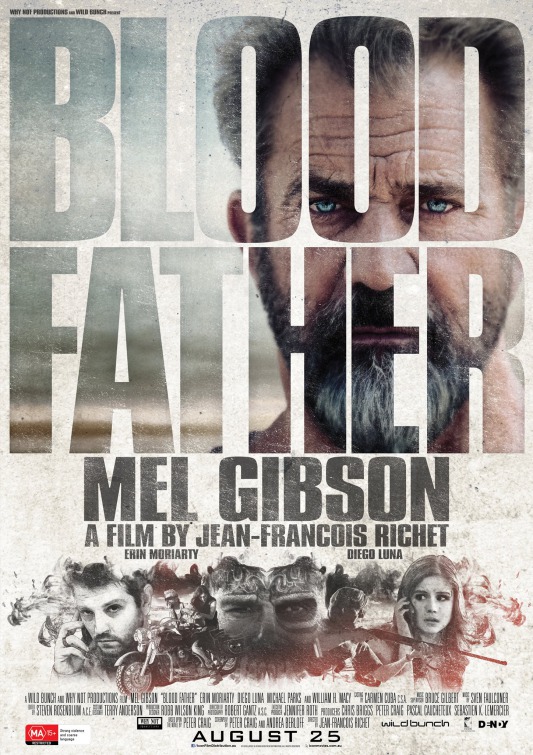 As much as I love action movies in general, there’s always been a special place in my heart for the “Old-Grouchy-Bastard-Wrecks-Fools-For-90-Minutes” sub-genre, and thanks to all of our favorite action stars slowly hobbling to the social security office on blown-out knees, we’ve got more to choose from now than ever. We’ve gotten solid work from people like Sylvester Stallone (BULLET TO THE HEAD), Arnold Schwarzenegger (THE LAST STAND), Jean Claude Van Damme (ASSASSINATION GAMES), Dolph Lundgren (SKIN TRADE), and even Michael Caine (HARRY BROWN), that all have either played with the idea of living through a violent past to possibly doing some good, or proving that being 50+ doesn’t mean you still can’t kick a fool through a wall. As much affection as I have for those actors and their filmographies, though, few of them have transcended their pulpy roots in any real way (hey, not everything can be UNIVERSAL SOLDIER: DAY OF RECKONING). So I was pleasantly surprised to find that BLOOD FATHER is not only a top-tier action thriller starring one of the best actors of that generation of action stars, but also a compelling narrative about the bonds of family and coming to terms with the bodies you’ve left behind and the ones you still have to leave to protect the ones you love.

The story centers on ex-con Link (Mel Gibson), a former biker two years sober and one year out of the joint who spends his days working at his trailer park tattoo parlor, trying to stay sober, and trying to find his runaway teenage daughter Lydia (Erin Moriarty) . Then one day, Lydia calls out of nowhere, looking for help after accidentally shooting her drug-dealer boyfriend, and just looking for enough cash to carry her to Oregon. Link manages to convince her to stay, but it soon becomes clear his daughter has some serious heat bearing down on her from the cartel her boyfriend worked for, and Link has to use every trick and contact he’s procured over a lifetime of sin to hopefully carry his daughter into a better life than he ever had himself.

Directed by Jean-Francois Richet (ASSAULT ON PRECINCT 13 ’05, the MESRINE films) with a script by Peter Craig (THE TOWN) and Andrea Berloff (WORLD TRADE CENTER), BLOOD FATHER operates like one of those moderately-budgeted crime thrillers of the late seventies that don’t really exist anymore. Which is to say, unlike the films and actors I listed before, this isn’t DTV or a studio afterthought. Not that quality can’t exist in those worlds, but this film operates as cinema with no asterisks next to it. The world that Link and Lydia exist in is one of rolling California highways, run-down hotels, and farmland, and Richet shoots to maximize that particular distance that these characters have to travel to escape a particular brand of brutality. The action in this flick is sparse, but when it hits, it’s loud, messy, and hits like a solid round from a shotgun. There are at least two truly kinetic sequences that made me perk up, one tight gunfight inside of a trailer, and another rolling motorcycle shoot-out that really shows that Richet knows how to use violence for maximum effect.

However, this wouldn’t work without someone like Gibson in the lead. When BLOOD FATHER was first announced, it originally had Sylvester Stallone attached to star, and although I believe Stallone is the best capital-A actor to come out of his generation of action stars, I’ve always thought Gibson was on par, due to his particular brand of animalistic energy. Given Link’s journey through the film, you need someone like Gibson, whose own very public long dark night of the soul over the years mirrors his character’s in a few significant ways. The film routinely frames Link like a wounded dog, calm but ready to bear his teeth in a way that feels viscerally real. Gibson sells the fact that Link is a man who is entering his twilight, looking at his life with clear sober eyes for the first time, and truly trying to change but slowly realizing the only way he can save his daughter from similar demons is to become just as nasty, if not more, than he ever was.

And as his daughter Lydia, Moriarty acts as a perfect foil. Lydia is played as that particular kind of teenager who has both seen more than their parents like to admit, while still being naive to just how bad a situation can be. The relationship between the two is layered and fascinating, incorporating normal father/daughter dynamics into unusual lives. There are some great character beats that are both funny (Link getting just as exacerbated at Lydia that a cartel hit squad is rolling up to his door as he is being sure he’ll get blamed for for breaking his parole for fighting back), and heartbreaking (Link and Lydia bonding over the ways they’ve tried to kill themselves over the years). It’s the kind of propulsive character-based storytelling that I think adds to an already compelling set up. The film is further propped up by filling out the cast with solid character actors, such as Diego Luna as Lydia’s boyfriend, William H. Macy as Link’s AA sponsor and friend, Michael Parks and Dale Dickey as Link’s former boss and his wife, and Miguel Sandoval as a former kingpin who offers Link a way out. All of them add to the film’s layers and lived-in feeling.

If there’s anything the film is lacking, it might be that there’s an attempt at generational conflict that doesn’t really go anywhere. I understand the want for it; Gibson being considerably older than Moriarty, there would have to be at least some comment on the generational differences, but ther’es a lack of commitment that doesn’t do the film any favors. There’s a brief scene about Mexican immigrants that everyone under thirty and the least bit liberally-minded has had with their parent, but neither character feels invested in the conversation, so it just comes off as filler, and even a later conversation between Lydia and Michael Parks’ Preacher about how Lydia’s generation has commercialized real outlaws like her father without knowing what goes into that kind of life has no follow-through. It’s an understandable choice given the narrative, and perhaps unbelievable that these characters wouldn’t have these conversations, but Gibson and Moriarty’s easy chemistry doesn’t work with that kind of conflict, and doesn’t add anything that the main narrative isn’t already providing with sicarios with face tattoos.

All told though, a film that can deliver on this kind of subtle pathos while also showing a fight where a handcuffed Mel Gibson bites a dude’s ear off will always win me over. It’s gnarly while being introspective, and conscious in its construction while still being wild. This will appeal to both action junkies and fans of boot-leather tough film-making, and if you have the chance, catch it in theaters ,because the whole crew make it worth the trip to the big screen. I wouldn’t be surprised if BLOOD FATHER finds its real life on home video, because its mix of muscular film-making and high lonesome heart could end up making it a minor classic.