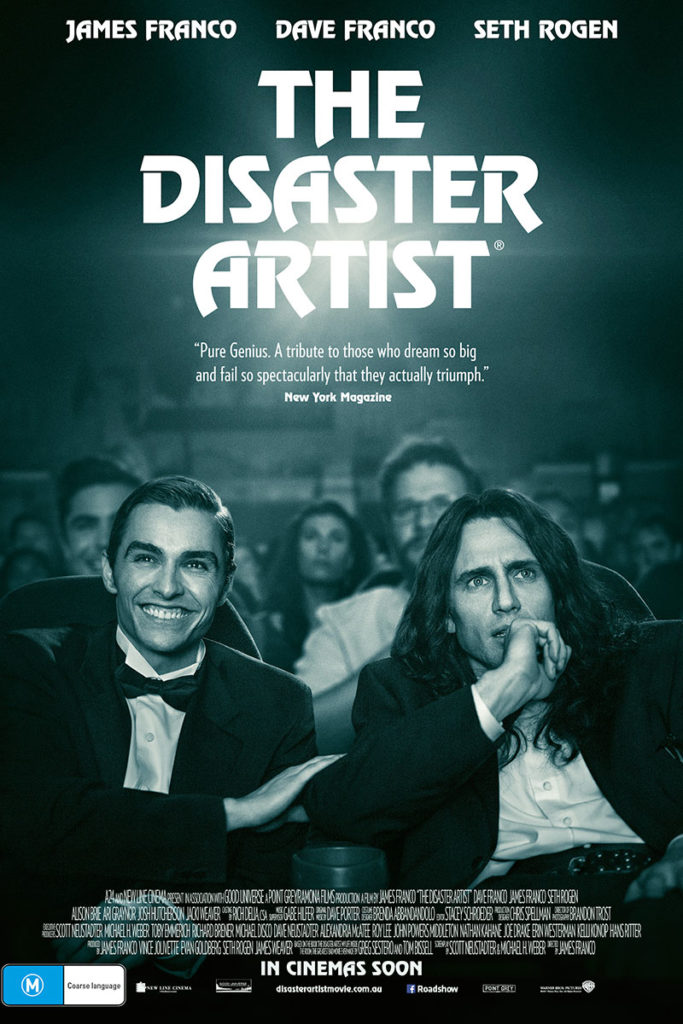 With the release of THE DISASTER ARTIST, you’ve surely heard of its inspiration, THE ROOM — arguably the worst movie ever made. Again, THE Room, not ROOM, the similarly titled 2015 film in which Brie Larson won an Oscar for her brilliant performance (I’ve had to make this clarification to my friends no less than a dozen times).

While you’ve certainly seen the trailers and know of THE ROOM by now, most people have yet to see it (you should absolutely see THE ROOM prior to THE DISASTER ARTIST, it will enhance your viewing experience). It’s an awkward, absurd tale of love and betrayal that centers around a love triangle involving Johnny (played by writer/director/producer/financer extraordinaire, Tommy Wiseau), his fiancé Lisa, and Johnny’s best friend Mark (Greg Sestero). Mark has been having an affair with Lisa, or begins to have an affair with Lisa a month before the wedding – It’s unclear when this affair starts, nobody knows really, the dialogue is perplexing… it’s not important, like most of the movie, it’s rather confusing.

THE ROOM features a cast of unknown actors, a plot that struggles to make sense, random parts and dialogue that have nothing to do with the plot, scenes that appear out of order, awful post-production sound and dialogue, characters vanishing midway through the film, at least three extremely cringe-worthy (and unnecessary) sex scenes, and a football that gets more screen time than the majority of the cast.

Most importantly though, it features Tommy Wiseau, an aspiring actor who, unbeknownst to him, lacks charisma, good looks, and any sort of ability to act. It’s clear from the onset that Tommy is the one funding this project, as he is not your prototypical Hollywood leading man, and obviously terrible at his job. However, just like those bizarre, and often sad auditions American Idol airs at the beginning of each season, Tommy is worth watching, and he is the reason THE ROOM has become a cult classic. No movie embodies the saying “it’s so bad, it’s good” like THE ROOM – which in turn makes it an enjoyable and re-watchable film.

THE ROOM leaves you with so many questions – not just concerning the film, but about Tommy and the people who made the picture. It’s a movie that leaves you flabbergasted and questioning, “How in the hell did this get made?” Thankfully Greg Sestero wrote a book about the film-making process and his relationship with Wiseau (The Disaster Artist: My Life Inside THE ROOM, the Greatest Bad Movie Ever Made), then James Franco (plus his crew of usual suspects) decided to turn that book into a movie.

Naturally, there are many parallels between the two films. Like Wiseau in the original, Franco garners most of the attention here, and in both instances, the casts are feeding off of Wiseau’s persona. Franco’s portrayal of Wiseau is spot on – the accent, mannerisms, predictably unpredictable behavior, and general mysteriousness are all captured rather well through both dialogue and facial expressions. Plus the makeup artists did an excellent job with Franco’s face – there were plenty of times I felt like I was watching Wiseau himself and not Franco in character. The Oscar buzz he’s getting (for ironically playing the star of the worst movie ever made) is well deserved, as his depiction of Wiseau is near-perfect.

Franco makes it easy on the ensemble cast here. Dave Franco, Seth Rogen, Hannibal Buress (Broad City, The Eric Andre Show), Allison Brie (Community), Nathan Fielder (Nathan For You), Megan Mullally (Will & Grace), Paul Scheer (The League), and the usually ridiculous Jason Mantzoukas (The League, Brooklyn Nine Nine) all co-star, and are all incredibly witty humans that are relegated to playing normal people reacting to the very bizarre Tommy. It works – there is no need for any of them to put much effort into being funny, and that keeps your attention on Wiseau/Franco. It’s like, you’re seeing all of these funny people with nothing overtly funny to say, just in awe at the person they are interacting with, and you in turn laugh. At one point, Rogen’s script supervisor character, Sandy Schklair, blurts out during the premier “How do you not recognize this guy?” during one of THE ROOM’s more infamous scenes, and it’s hilarious, as it’s what everybody in the audience is thinking. The jokes at Tommy’s expense are easy and obvious to make, but they are also funny.

These reactions are natural and seem rather genuine – what you might expect from meeting a person as unique as Tommy Wiseau – and it’s all rather comical as a result. But what makes this film even more enjoyable is that it’s not mocking Tommy Wiseau. Franco tells us the story of the making of the film, without constantly mocking and demeaning Wiseau. Sure, there are a few insults sprinkled in here and there as plot points, but the movie stops short of insulting Tommy.

Wiseau so badly wants to be famous, but on his terms. He is explicit – he does not want to portray a monstrous villain, he wants to be the lead, the hero, the nice guy. But he’s weird, creeps people out, has no friends, and looks and sounds strange. So he funds and makes his own, horrible movie to achieve his dream – a movie that as bad as it is, is enjoyed by thousands of people. How can you mock that?

Tommy did something that very few people do, he went after his dream and poured everything he had into it (luckily he had the financial means to do so) – don’t we all want to do that? Early on in the film, Sestero asks Tommy to do a scene with him, not because he’s a good actor, but because he can be vulnerable on stage and not hold back. He’s driven, has heart, and will stop at nothing to get on the big screen. No matter how much he may have failed in his career, it’s hard to mock somebody like that.

Wiseau is a peculiar man, difficult to work with, and hard for some to be around, but he seems to be a good person who means well – so you’re rooting for him. Over the past decade, Wiseau has become a cult icon, and while he doesn’t end up the hero he had hoped in the fictional THE ROOM, Franco portrays him as one in THE DISASTER ARTIST – deservedly so. If something is “so bad, it’s good” then is it actually good? No, not at all, it still sucks, and THE ROOM still sucks. However, it’s a pleasure to watch, and why thousands of people go to midnight screening across the country every year – which has since helped the movie turn a profit.

Franco has by no means turned Wiseau’s “disasterpiece” into his own masterpiece, but he has created a hilarious reenactment of THE ROOM, its origin, and what took place behind the scenes without slighting Tommy and one of the most popular cult classics of all time. Wiseau is now, essentially, responsible for two unbelievably enjoyable movies. He may not be the hero on screen, but Franco shows you that he can be the hero in real life.