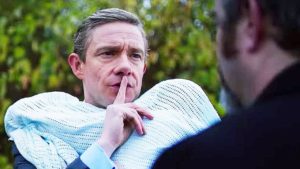 Aside from the mixture of lurid and Gothic that made up the classic Hammer Films aesthetic, is there anything that screams British horror more than the anthology film? GHOST STORIES seems at first to be harking back to the glory days of Amicus, but pulls a neat inversion of the classic anthology structure by more fully fleshing out the “wrap-around” segment while presenting the individual stories less as short films on their own and more as themed vignettes that are closer to character sketches than anything else. This approach yields surprisingly good results.

Professor Phillip Goodman (Andy Nyman) is a professional debunker of fake psychics and bogus supernatural claims. Driven by his childhood resentment of his father’s devout religious beliefs that drove away he and his sister, Phillip is a staunch skeptic when it comes to any supernatural belief, claiming, “the brain sees what it wants to see.” Not coincidentally, this was the belief of Charles Cameron (Leonard Byrne), another debunker of supernatural claims whose TV show inspired Phillip as a child. 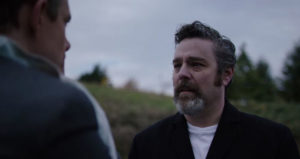 When Charles disappeared without a trace, Phillip, like most everyone else, assumed him to be dead. But when Charles resurfaces years later and reaches out to Phillip, he does so as a changed man, claiming that there are things that cannot be explained away with logic or science. He gives Phillip three of his old case files that he was unable to close and asks him to debunk them if he can.

The first case is a fairly traditional haunting story told by a bitter, alcoholic night watchman (Paul Whitehouse) about his brush with a ghost in an abandoned asylum. The second story is closer to a creature feature as a timid, paranoid teenager (Alex Lawther) has a run in with possible demons on a remote country road. The third story is a poltergeist tale of a rich stockbroker (Martin Freeman) spending a long night alone at home as his wife is in the hospital with complications to her pregnancy. Weaved through all the tales are small details that seem to carry over from sequence to the next, hinting at a connection that cannot logically be explained away, no matter how much Phillip would like to do so.

GHOST STORIES started life as a stage play by Nyman and his co-writer/co-director Jeremy Dyson. It is hard to imagine the story bound to the stage since the filmmakers have done such a beautiful job of opening up the world for film. Each story has a different style seemingly inspired by filmmakers who traditionally work in such subgenres. The haunted asylum tale feels like it could be a lost James Wan short film with its steady increase of tension and good use of jump scares. The demons on a country road story feels like EVIL DEAD II-era Sam Raimi with its precise editing, energetic steadicam shots, and sense of humor. The poltergeist segment feels like a Ben Wheatley film with its caustic wit dissecting the tension between “the haves and the have nots” that takes a left turn into genre territory. That Nyman and Dyson take these contrasting tones and give them all a cohesive atmosphere of impending doom that is brought through from Phillip’s introduction and extended third act wrap-around segment is truly impressive. 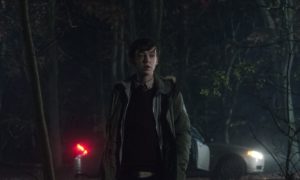 The altered structure of Phillip’s wrap-around story being given far more screen time and importance than the cases he is investigating feels strange until the realization sets in that the film is not truly an anthology. Instead of a series of morality tales that lead to a twist ending for the character being told the stories, GHOST STORIES wisely understands that the audience knows there is a twist coming. Rather than saving the twist for the final scene, Nyman and Dyson drop several clues throughout the film to what is coming and then deliver a surreal, demented, and sadly touching character study of Phillip over the final thirty minutes, both fulfilling the idea of a twist ending and giving it much more emotional impact than just being ironic.

Turning what promises to be a horror anthology into a character study of a broken man could have been a risky proposition. But Nyman delivers such a wry, sympathetic, occasionally exasperating performance that he helps the film earn its final scenes. The clever script structure would not have been nearly as effective if Phillip was not as flawed and oddly tragic of a character.

Even with the revelation that it is not quite the traditional horror movie that it promises to be, GHOST STORIES still hits upon some fun sequences during the first two cases that Phillip investigates. The final scenes that focus on Phillip delve into sad, real world horrors that come close to being part of the British miserablism subgenre. While those films are more visceral and have left me feeling like I have been kicked repeatedly in the guts, this time around, the effect is more of an existential terror that lingers long after the film ends.

If you are looking for a horror movie with graphic violence and an in-your-face tone, you are looking at the wrong film. There is a restrained—dare I say classy?—feel to GHOST STORIES that is supplied by the cast and an alternately lovely and ominous score by Haim Frank Ilfman. The nifty structure, classical “scary movie” atmosphere, and emotional payoff make this a breath of fresh air. I hope genre fans do not sleep on this one because they would be missing out on one of the most interesting and satisfying horror films that have come out in an already impressively stacked year. 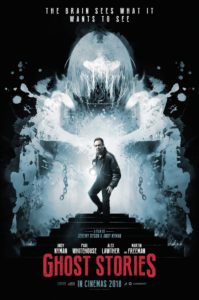