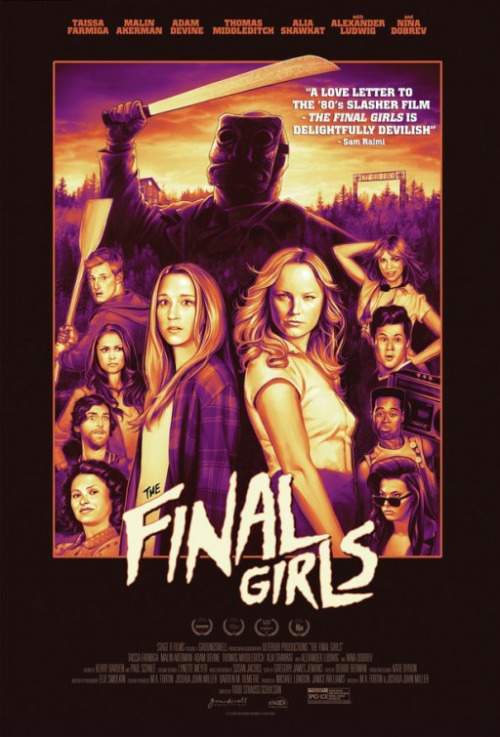 At this point, most viewers with even a baseline understanding of genre cinema know that when you hear the words “Horror-Comedy” what you’re really hearing is a kind of misnomer. Horror-Comedies are either HORROR-Comedies or Horror-COMEDIES, in that a movie with that tag either falls into one side of the equation or the other, but very rarely both in equal measure. There’s nothing wrong with that, but THE FINAL GIRLS might be the first movie in this category to have the absolute bare-minimum requirements to qualify its horror hyphen. It’s clear that director Todd Strauss-Schulson, writers M.A. Fortin and Joshua John Miller, and the whole crew have a real affection for the slasher movies of the eighties it’s about as scary as a warm marshmallow. What it lacks on the horror side, though, it more than makes up for in its sense of humor, which has cleverness to spare, and real heart to it that makes the film an entertaining, if bloodless, viewing experience.

Max Cartwright (Taissa Farmiga) is still dealing from the death of her mother (Malin Akerman) three years earlier when she’s convinced to go to a screening of “Camp Bloodbath,” a cult classic slasher movie that her mom had starred in the ‘eighties. However, after an accident at the theater during the screening, Max and her friends Gertie (Alia Shawkat), Vicki (Nina Dobrev), Chris (Alexander Ludwig), and Duncan (Thomas Middleditch) somehow find themselves transported into the movie alongside the movies’ characters, right before a masked machete wielding maniac named Billy descends on the summer camp where they take place. Once they realize they’re just as vulnerable as the hormone-fueled camp counselors are, Max and her friends try to take Billy head-on and Max gets a chance to spend one more day with her mom, and maybe even save her life.

The biggest referential anchor for THE FINAL GIRLS is the FRIDAY THE 13th series, which makes sense, because if you’re going to poke fun at a genre, you might as well do it by going after the genre’s biggest swinging dick. Todd Strauss-Schulson (A VERY HAROLD & KUMAR 3D CHRISTMAS) knows the language of those flicks, and knows that the audience does too, and uses that as an effective shorthand to get us right into the action and also provides prime fodder for some great jokes. (There’s a particularly great recurring gag where the characters from the “real” world know Billy is near when they hear his distinctive opening score pop up, which is about two notes removed from FRIDAY THE 13th‘s iconic opening).

The way THE FINAL GIRLS is filmed is energetic and slick (depending on your tastes, maybe too slick), and there were several times where Strauss-Schulson does a camera move and you can’t help wondering how he did that. The only real problem is that sometimes the film is too colorful, to the point where it stops referencing overly-saturated grindhouse prints and seems like something out of Tim Burton’s CHARLIE AND THE CHOCOLATE FACTORY.

The real charm of the movie, though, is the cast, whose performances thread the needle of meta winking and sincerity. As I said before, this is a movie that leans pretty heavily on the comedy side of things and as such has a few ringers from the comedy world. Thomas Middleditch plays Duncan like a more giddy version of Jamie Kennedy’s character from SCREAM, the one who lays out the genre tropes for the characters and the audience and who is legitimately excited about being in the film. Workaholics‘ Adam Devine shows up just long enough to channel some douchebro magic as an even more crude version of the sex-obsessed alpha male. 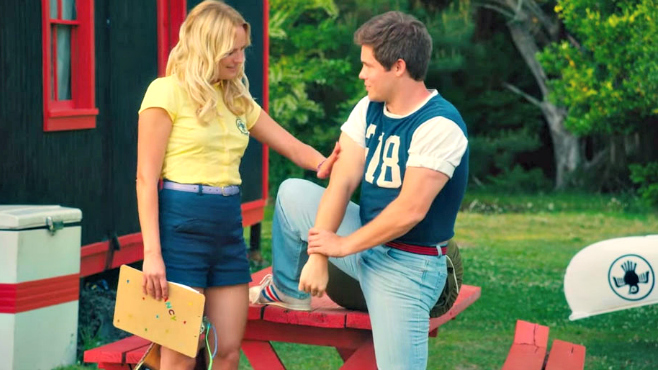 But this movie isn’t about men. It’s called THE FINAL GIRLS, after all, and without getting into spoiler territory, almost all of the male characters are either taken off the board relatively early or put into the position of damsel-in-distress. The women, on the other hand, are all across the board pretty incredible, especially with the core quartet of Farmiga, Dobrev, Shawkat, and Akerman. Farmiga, Dobrev, and Shawkat bring a real sense of history with their characters, and have that easy rapport friends have, and in one case ,the hurt awkwardness that former friends have, and there are actually some legitimately interesting conversations about the nature of friendship after someone goes through a tragedy. And that tragedy offers the film’s most astounding relationship, between Farmiga’s Max and Akerman’s Amanda/Nancy. Max is given an opportunity to spend one more day with her mom, Amanda, but only through a version of herself in the film character, Nancy. Nancy is not Max’s mother, except in the most surface level of ways, but as the film goes on, Max is able to bring out the qualities her mother put into her character, who in turn resolves Max’s lingering guilt, and to move on, which Farmiga and Akerman sell with a light but deft touch.

This movie passes the Bechdel test, is what I’m saying.

The only real problem with the movie is that, despite the genre it’s exploring, it’s pretty tame with its violence. This isn’t necessarily a problem (and not even that noticeable, since my friend and I didn’t even notice it until we were talking about it later), but when you have a scene where a character gets beheaded and you’re expecting a geyser of blood to follow and then nothing happens, it’s kind of a let-down for the gorehounds out there. That, and some appropriately bad jokes about the differences between now and the ‘eighties are the only real downsides. Overall, this is one of those movies that I could see having a HUGE diverse fanbase once it’s released, and despite my nitpicks, I hope it’s given the chance to find it.