Sometimes the best bit of advertising is when people walk out of your movie. I counted more than a dozen people who left during the Tribeca Film Festival industry screening of SCHERZO DIABOLICO, the newest film by the director of LATE PHASES and HERE COMES THE DEVIL. Many times, independent movies fans will stumble into a Midnight screening and find themselves out of their depth. Had the film pushed the envelope in some exciting way – its graphic effects, say, or the exploitative content – perhaps an intrepid publicist could spin this as a point in its favor.

“Too much for Tribeca!” Alliteration makes every headline better.

One small problem with that narrative: SCHERZO DIABOLICO is not a film that is simply misunderstood by fans of documentaries and foreign language pictures. There is no overlooked redeeming quality to its gore, nor can we make an argument for its subversive nature as a revenge film. SCHERZO DIABOLICO is a Midnight movie with some strong ideas, some terrible execution, and not much else to write about; a far more difficult pitch for our theoretical publicist to write.

The film opens, promisingly enough, with a planned kidnapping. Aram (Francisco Barreiro) works long hours at a local financial firm, saving the company millions and costing himself a happy home life. Aram’s firm is cheap; his boss (Jorge Molina) recognizes the quality of his work but refuses to pay him overtime or advance him through the corporate ranks, leading Aram to think up a new strategy. Aram carefully plots the kidnapping of high school student Anabela (Daniela Soto Vell), using a combination of the internet and his own practical approach to plan out the perfect ransom. The only problem is, Aram’s end game could use a little work, and Anabela may have designs of her own.

As befitting its title, the heart of SCHERZO DIABOLICO beats to classical music, but how well it understands these compositions is another question entirely. In music theory, the term scherzo denotes light-hearted and bouncy sections of music. In the typical symphonic structure, the scherzo is the third movement, coming right before the finale and right after the second, slower section. You can pick at the structure of SCHERZO DIABOLICO and see some compositional commonalities; the film’s final revenge plot is meant to echo the themes presented in the beginning, while the light-hearted violence of Anabela’s revenge gives rise to this devilish playfulness.

As a structural element, the use of classical music in a thriller is intriguing. As a plot device, the use of classical music becomes far less compelling. The introduction to the music – the way that Aram uses his piano music to measure the time involved in the kidnapping – is an inspired synthesis of music and visuals, echoing the musical long-takes of 2014’s GRAND PIANO. Once the kidnapping is completed, however, the song becomes a musical maguffin. Anabela hears the music playing when she was taken and is driven into a murderous rampage; she is also able to use the music to uncover Aram’s identity, an impressive feat given the commonality of the song. Nothing in SCHERZO DIABOLICO ranges far from your typical Time Life Collection of classical music, and the film’s plodding twists feel no less fresh. 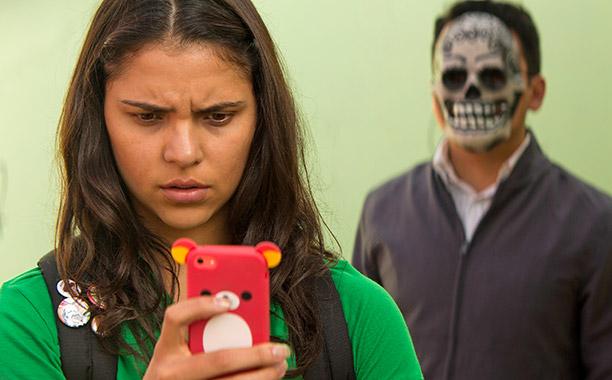 In fact, this link to the symphonic form – the fast section and the slow section – leads to the film’s biggest issue. SCHERZO DIABOLICO initially executes with both feet firmly planted on the ground. Aram practices for his kidnapping through a series of clever encounters, practicing his chokehold on his father with Alzheimer’s and convincing his son to let him carry him around the apartment until Aram is used to the weight of an unconscious body. These scenes suggest a level head. When Aram is forced to torture and abuse Anabela for the sake of his scheme, the film also shows this brutality as a calculated effort. Aram also exploits the body and memories of his regular call girl, finding out what revelations brought shame to her family and what made her feel uncomfortable. Aram’s violations work on multiple levels.

And then SCHERZO DIABOLICO shifts gaily into an exploitation revenge film, and what audience remains is left feeling uncomfortable at best. Is it empowering to watch a woman – previously forced to strip and weep by her idnapper – tear the legs off her enemies? Is it fair for the movie to change the rules on us so quickly – moving us from a world where the details matter into a grotesque parody of the crime thriller – while giving us so little in return? Given the film’s slow initial pacing, it is as if SCHERZO DIABOLIO is a parking car, carefully inching its way alongside the curb until suddenly accelerating into the storefront itself. This can be a great way to create humor in your film, provided this humor doesn’t require us to laugh at an exploited high school-aged girl.

There are ideas floating about in SCHERZO DIABOLICO that warrant exploration on screen. There are certainly connections between art and violence, between trauma and revenge, to be made in both a comedic and an exploitative bent. Some films suffer from trying to do too much; SCHERZO DIABOLICO tries to combine two elements that are too dissimilar for it to handle, asking us to connect to Anabela as both victim and monster, and do it all in the name of good, clean Midnight fun. SCHERZO DIABOLICO is not an intentionally mean movie. It comes by its ugliness through lack of skill; somehow, that is the worst of all.