Given recent events, I suspect punk rock is about to make one hell of a comeback.

Not that it ever went anywhere, but for whatever reason punk rock tends to thrive under republican regimes. The Bush years gave us some great music but it was really under Reagan and Bush original recipe that punk rock found its legs to kick in some faces. Personally I can’t claim any first hand knowledge of this, I’m too young to have seen the original movements, and spent most of my adult life inside what was effectively countercultural peacetime under Obama. But in recent weeks I’ve found myself listening to personal favorites like Titus Andronicus and Screaming Females, but digging back even further with The Dead Kennedys, The Stooges, FEAR, and Black Flag while being forced to look at a particular wispy haired head with the words “we’re gonna bury you” running through my head the way only the righteously indignant can. Its a thought that I’m sure Penelope Spheeris has had more than once, and one she gave cinematic form to with the wildly righteous yet bleakly dark bit of dramatic rock and roll anthropology that is SUBURBIA.

Let’s be real here: Penelope Spheeris should be in every hall of fame cinema has because she is straight up legit. Born to carnies, she graduated film school and was promptly hired by Lorne Michaels as a producer on the original season of SATURDAY NIGHT LIVE where she was paired up with a young Albert Brooks and by all indications taught him how to make movies. This collaboration continued into the production of the now classic REAL LIFE, but also saw Spheres itching to break out onto her own which she did by making what is effectively the greatest music documentary of all time THE DECLINE OF WESTERN CIVILIZATION. This didn’t come about from happenstance either, Spheeris is a true blue punk rocker and had integrated herself into the burgeoning LA scene early and had become friends with a lot of the biggest acts of the time, that kind of unprecedented access and a down and dirty film style that for those who saw it made her a damn near legend. As impressive as that film may have been, there’s always been a divide between documentaries and features so Spheeris wrote up a script cobbled together from more than a few real personnel accounts of kids she had met at various concerts and crash pads, and went to the one man in Hollywood that would put up the money for a feature this out there: Roger Corman.

Punk is a hard thing to portray on film. For every REPO MAN, WE ARE THE BEST or GREEN ROOM there’s inevitably going to be some shit like CBGB. If I had to theorize why it probably comes down to aesthetics. Film, a medium that regularly comes with multi-million dollar budgets and glamorous people attached to it is the antithesis to punk rocks whole ethos. So when the people who have invested their lives in this stuff see someone playing pretend they go at it like a bloody piece of meat. So when a film comes along and gets the details right they can’t help but respect it. And Penelope Spheeris is all about the details.

Working with a modest budget of half a million dollars Spheeris crafts a narrative that’s pretty simple on the surface. Following a young runaway as he comes to live in an abandoned house with a bunch of other misfits and castoffs, they slowly bond into a family of choice while also having to deal with the prejudices of a neighborhood watch group. Spheeris knew how to craft a compelling us versus them narrative, probably because she had lived through more than one of them, but that isn’t so much her interest for the film and instead takes a dramatic approach to what she had previously only documented and tries to get into how these kids live. She utilizes a lot of first time actors and actual scene kids for her cast as well as filming in real venue locations and dilapidated housing complexes, a move that was done just as much to create an air of authenticity as it probably was for budgetary reasons. There are real bits of rituals that are almost trivial in nature, showing that punk dress and style isn’t so much a message to the outside world as it is a signifier that they all belong. And given that they’re all moody teenagers they all even go so far as to brand themselves with the letters T.R to mark themselves as “the rejected”.

Casting as she does is an interesting move, albeit one that comes with limited results. The performances and dialogue rarely rise above being kind of stilted, however there is a refreshing lack of ego to them all which leads to its own particular kind of charm. Spheeris knows what kind of performance she needs, managing to milk particularly fun performances from The Patriots frontman Chris Pederson as Jack Diddley, a character that becomes a damn near folk hero, and The Red Hot Chili Peppers Flea as Razzle, a guy that carries around a rat for the whole movie (which he eventually puts in his mouth apropos of nothing) and manages to train a pack of wild dogs. Hell, story goes Spheeris found female lead Jennifer Clay at a bus stop just as she was coming into LA and managed to create at least one happy ending out of that setup. The rest of the kids vary but Spheeris approaches them all with sympathy but without naivety. They’re all flawed but in the context of the film that’s not a negative, it just is.

That lack of naivety also informs the larger themes of the film. The film opens with the death of a child by dog attack, and that sense of a world more than willing to chew up and spit its young comes through every shot. Spheeris has spoken before how some of the more outlandish action came down from Corman who claimed he needed that along with a fair amount of T & A to make a profit, but it also adds that these are kids that have to run the risk of being attacked or maybe even killed whenever they choose to leave their house. They’re are fights between locals, other scene kids, and even each other and they’re truly knock down drag out affairs. There’s also danger that just as easily comes from within, as Spheeris devotion to the truth forces her to acknowledge the darker elements of the scene whether it be drug use, racism, or the mental scarring from sexual assault. Throw all of this into a sweaty mosh pit set to the music of bands like D.I., T.S.O.L, and The Vandals and something’s bound to break. 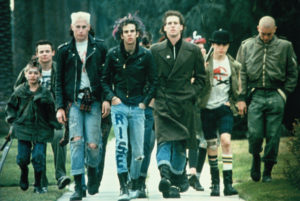 It’s when Jennifer Clays Sheila dies of a drug overdose that the films final act is put into a motion and the true disparity of these punks and the straight world snaps into focus. Unable to figure out what to do with they’re dead friend they all decide to take her back to her childhood home, literally showing up at her fathers front door with her dead body in they’re arms in a scene that’s both forehead slapping funny as well as incredibly sad. A funeral quickly comes together where they all show up again only to be told they weren’t welcome, which given that they were far better than her real family, her father is heavily implied to have raped her as a child, a fight breaks out which puts them back on to the radar of the community watchdog group that at this point have already proved themselves dangerous by riding around to shoot stray dogs. This casual violence finally brings in maybe the only levelheaded character in this whole film Jack Diddley’s stepfather William, a black police officer played by Don Allen. The guy has to bribe the kids to listen to him and he gives them a warning that at a certain point this group will take the law into they’re own hands and coming from a black character its pretty clear what Spheeris is trying to allude to. 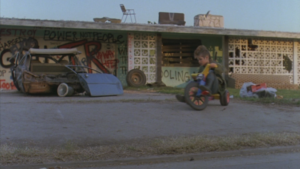 By the time the film ends we get a big rousing fight between our punk heroes against the real worlds fascist representatives and its all very rousing until a last minute accident bookends the film with the death of another child. Like I said Spheeris didn’t go into this as some naive poser, she’s fully aware at this point in history that the assumption of what would happen to a lot of the punk scene would be death just immediate and unwarranted as these. It’s not a declaration by any means, just another blunt fact laid out by a consummate truth teller. There’s a lot of joy to SUBURBIA no doubt about it, but Spheeris so thoroughly doesn’t pull her punches that there’s a bleakness that catches you off guard. So it ends in a pretty nihilistic place, but weirdly there’s a bright side taken in a real world coda. Punk rock kept on going, it lived on despite the world trying to kill it and its spirit lives on because of people like Penelope Spheeris. SUBURBIA asks you to acknowledge that the world might be out to get you, but chances are you or your people will still be standing on the graves of the people that tried to keep you down in the first place.