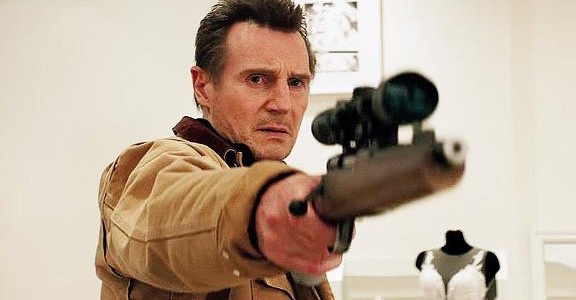 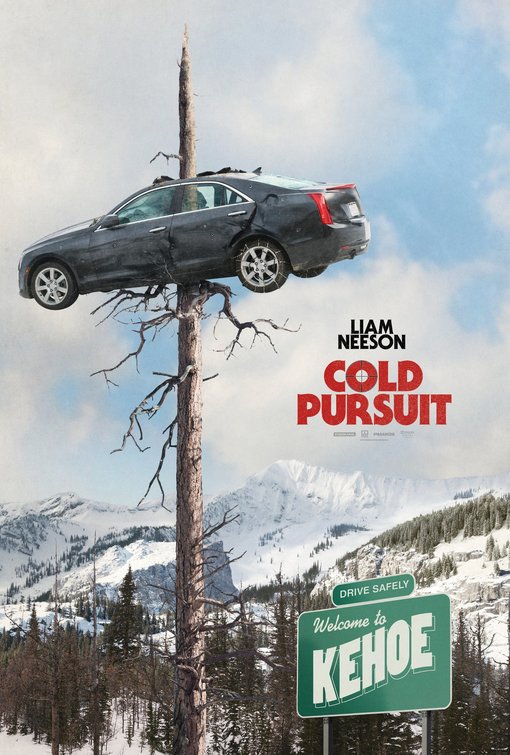 COLD PURSUIT boldly assumes we haven’t grown tired of watching Liam Neeson beat everyone’s ass; however, it also thoughtfully assumes that this formula might need a little something new, like a morbid streak of black humor. Such an approach comes at the right time: I wouldn’t say Neeson’s schtick has lapsed into self-parody just yet, but there’s a reason you kind of chuckle every time Hollywood announces one of these things. Just leave his family alone, bad guys. So in this respect, Hans Petter Moland’s remake of his own IN ORDER OF DISAPPEARANCE is a perfect vehicle for Neeson, precisely because it plays up to and against the expectations the actor’s curated for over a decade now. It does so to mixed results, though: while it’s easy to appreciate the gag of twisting this formula into a comedy of errors, it wears a bit thin and becomes a leaden drag at times.

Instead of taking a farcical, absurdist approach that would feel several steps removed from the usual fare, COLD PURSUIT is so dry that it feels only about a half-step away from just being a typical revenge movie. For about twenty minutes, it looks to be just that: Neeson is once again just a dignified family man, a decorated snow plowman named Nels Coxman, who just received a special commendation as Kehoe’s citizen of the year. But when his son Kyle (Micheál Richardson) dies of an apparent heroin overdose, his world collapses: unable to cope with the tragedy, his wife (Laura Dern, practically defining the term “thankless role”) leaves him, then he decides he’s going to blow his own head off. Just before he can pull the trigger, though, his son’s friend emerges with the truth: they got mixed up with some drug dealers, who killed Kyle to cover their tracks.  Naturally, Nels wants to kill ‘em all, so he does — sort of.

COLD PURSUIT doesn’t strike you as a barrel of laughs, especially when it leans into just how grim the situation is at first. Slowly but surely, though, the wry humor seeps in, like when Nels and his wife visit the morgue and find a big sticky note reminding the attendants to always load to bodies head first affixed to the cold chamber. It takes the attendant an uncomfortably long time to roll Kyle’s body out, the first of two gags involving dead bodies. You start to sense that maybe this whole thing might be a little offbeat.

Indeed, it unfolds in a crooked line that winds up zigging and zagging all over the place: far from a straightforward revenge thriller, COLD PURSUIT balloons into an entire drug war when kingpin Viking Calcote (Tom Bateman) misunderstands why his men have gone missing. We know that Nels has been brutally exacting vigilante justice and dumping their bodies into a nearby waterfall (a repeated sight gag that becomes funny by sheer force of will); Viking, however, assumes that rival drug lord White Bull (Tom Jackson) is attempting to encroach on his territory, touching off a conflict that spirals way out of control.

Meanwhile, Nels largely evades detection by both the drug lords and law enforcement, mostly because he’s unassuming. That’s one of the central jokes here, and why Neeson’s casting is so sharp: Nels isn’t exactly equipped with a particular set of skills besides plowing snow.  He does have an extreme willingness to see this through, even if it involves hiring a hitman to do his dirty work. Mostly, it feels like a matter of course for him: he must have his vengeance, then he’ll just go about snowplowing for the rest of his days. Also, his name is Coxman, something the script can’t pass up pointing out, just in case you don’t get it.

Neeson does get it, at least mostly: there are times when his performance feels cut from exactly the same cloth as other recent turns, but you catch the occasional, knowing glimmer in some deadpan moments that help to depict Nels as a sort of Coen-esque everyman who’s found himself trapped in a cycle of violence.  He’s not quite William H. Macy in FARGO, but those flashes of vulnerability and disbelief give COLD PURSUIT a nice, almost self-reflective dimension.

Moland never seems to be too terribly interested in self-reflection though; despite remaking his own movie and perfectly positioning Neeson in a role ripe with weighty thematic possibilities and revisionist implications, he’s content to play it for laughs. It’s fair to say that the Coens are a tonal reference point: at its heart, COLD PURSUIT  is a movie about a bunch of fuck-ups who can’t help but make the situation worse with each and every decision they make. Tarantino seems to have been an inspiration, too, what with all the violence, fast-talk, and random conversations between henchmen during their downtime. COLD PURSUIT feels sort of like the movies released during that brief period in the 90s when Hollywood was chasing the twin dragons of Tarantino and the Coens with acerbic, nihilist, bruised-knuckles-and-bloody-nose films.

Maybe that isn’t the worst approach, not when you’ve got the cast Moland has at his disposal here at least. COLD PURSUIT is full of outsized personalities and idiosyncratic performances that heighten the off-kilter tone. You’ve got Bateman living it up as a smarmy, racist kingpin who just seems to be slightly inconvenienced by this whole ordeal: he’s much more worried about micromanaging his kid’s diet, and he mostly seems bothered by the lack of etiquette on display when the situation goes further south. After inheriting the family business from his father, he believes there’s still proper order and protocol, and whatever’s happening here doesn’t conform.

Speaking of family business, at one point, William Forsythe strolls in as Nels’s brother. Sporting a Hawaiian shirt and a house that has TV screen fireplace above an actual fireplace, he provides inside expertise from his time spent working for Viking’s father. Forsythe’s always been one of our great character actors, and he doesn’t squander the opportunity to make an impression as this washed-up, shaggy-dog gangster who still has just enough dignity and honor in him to help his brother, who’s in way over his head.

An abundance of other fun turns is sprinkled throughout: Julia Jones as Viking’s no-nonsense ex-wife; Domenick Lombardozi and Benjamin Hollingsworth as a pair of enforcers whose secret relationship deserves more than what’s granted here; Raoul Trujillo, one of White Bull’s enforcers; Arnold Pinnock as “The Eskimo,” a hitman who steals a couple of scenes. I could read off nearly the entire cast list, because COLD PURSUIT absolutely hums with colorful characters who inhabit a rich, lived-in world.

It’s also a world littered with an askew, anarchic sense of humor, where men engage in completely pointless acts of violence they consider to be portentous — and that’s the joke, it seems. To their credit, Moland and screenwriter Frank Baldwin have a pretty good setup and extended delivery to this joke with Kim Dash (Emmy Rossum), the lone detective who suspects something is truly amiss with the various disappearances and slayings and is dogged enough to pursue it. She’s introduced trying to bust some dudes for smoking weed in public, before her more laid-back, veteran partner (John Doman) tells her to lay off, because it’s not a good way to serve the community. That’s their dynamic: she’s eager to investigate and sift through the gory details, while he’s quick to dismiss all of it. Between this and the various wives in the film (all of whom manage to avoid this maelstrom of testosterone bloodshed), Moland’s got a pretty good joke lined up about the women outfoxing the men, only he flubs the punchline. For all her hard work, Dash is mostly just there to pick up the scattered, bloodied pieces after the film’s climatic confrontation.

Because, again, that’s the real joke. COLD PURSUIT has a lot going for it, but stands pat in its largely detached, ironic worldview. Instead of going for deep, roaring belly laughs, it inspires a few bemused chuckles along the way, when it feels like it should be doing just a bit more. Admittedly, it’s grown on me during the course of writing this review, so maybe it’s just the kind of movie that needs a little bit more time to simmer in your brain. I still find myself wishing it had a little bit more punch, though: Moland’s direction is too detached and loose, so COLD PURSUIT feels like it meanders when it should zing with a little bit more force. It creates the same sensation as a country yarn told by a longwinded old-timer who ends with “ain’t that some shit?” before he spits and walks off, leaving you to shrug your shoulders as you nod in agreement. 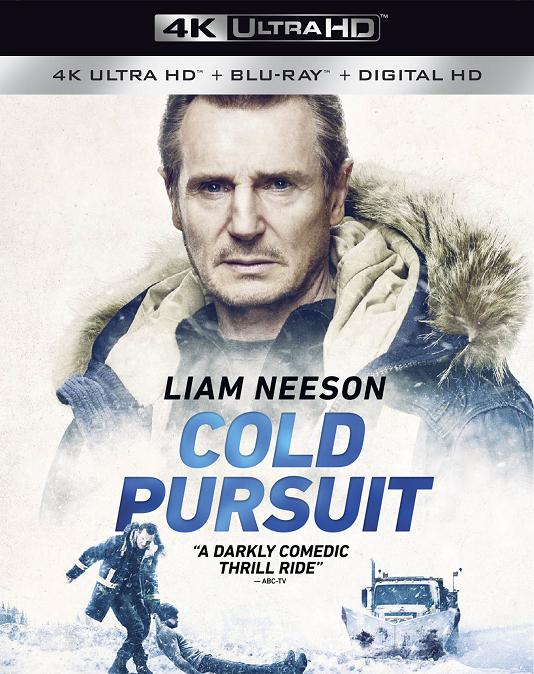 After debuting in theaters earlier this year, COLD PURSUIT recently arrived on various home video formats, including 4K UHD.  Because it’s a recent production, it comes as no surprise that it looks razor sharp and crystal clear on the latest format, which offers an uptick in resolution and color reproduction.  To be honest, COLD PURSUIT is most impressive with the latter: if you’re looking for a film that can show off how well UHD can handle extreme contrasts, look no further than this one.  Between the blinding white of its snowy landscapes and its shadowy interiors, COLD PURSUIT impressively runs the gamut in this respect, delivering a natural looking image that retains detail across the spectrum.  The upgrade is more subtle on this format, much more so than previous ones, but it is just noticeable enough.

Lionsgate has also provided a decent amount of extras to boot. The centerpiece is “Welcome to Kehoe,” a 26-minute making-of featurette with behind-the-scenes footage and interviews with the cast and crew.  A pair of interviews with Neeson and Moland provide further insight into their particular craft, with the former discussing how COLD PURSUIT contrasts with his usual fare and the latter discussing his decision to remake his own film.  Five minutes of deleted scenes and the film’s trailer complete the package, which also includes a Blu-ray copy of the film.