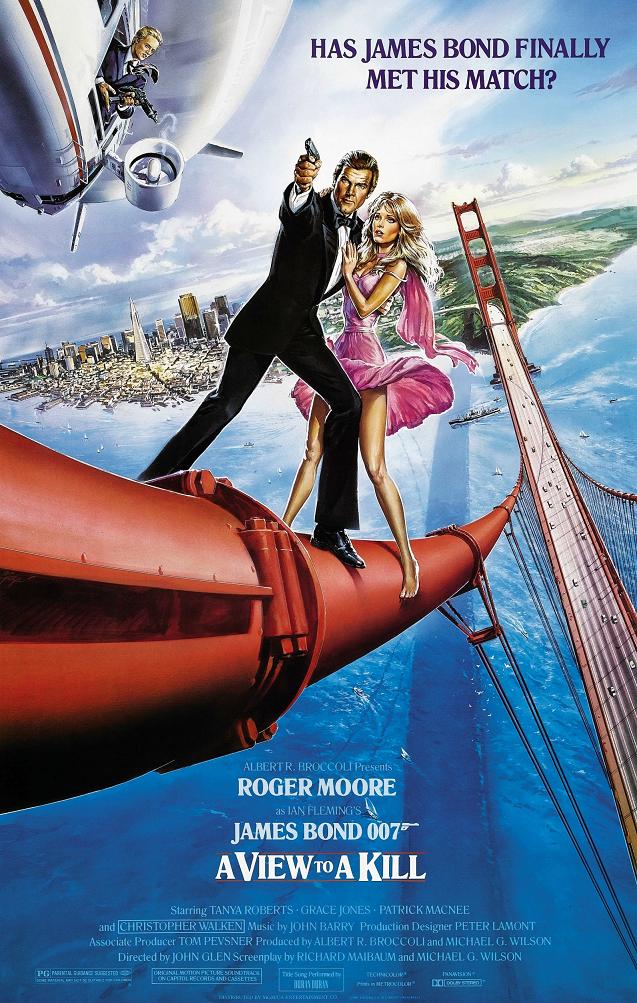 I love James Bond. I grew up with 007 not on the big screen, but on TV, courtesy of The ABC Sunday Night Movie in the ‘80s, beamed from a North Dakota affiliate to Saskatoon, Saskatchewan, my hometown. Sunday nights in my early childhood were spent at my grandma’s house, the extended family gathered in the living room with TV trays of homemade perogies and farmer sausage, watching the network TV premiere of various blockbusters and acclaimed Oscar winners. It was the family’s relief for what was likely another Sunday afternoon loss for the Saskatchewan Roughriders, our beloved—and inept—professional football team in the Canadian Football League (the team was so bad that it needed a telethon to raise money to stay afloat — 11 consecutive seasons of missing the playoffs in a 9-team league will affect any team’s profitability). The Sunday night movie was especially important to improve my dad’s foul mood over a 46-3 loss and a James Bond movie would help immeasurably. My earliest memory of James Bond on Sunday night was a brief scene from DIAMONDS ARE FOREVER: an older, moustached man has a scorpion dropped down the back of his shirt! I watched, repulsed yet fascinated, as the man startled and lurched to a quick death, and I was hooked! I was too young to understand the plot, but the scorpion death was memorable to me and I wanted more gruesome deaths! Thankfully, the James Bond movies were more than happy to satisfy my morbid craving and I grew to love all the actors who had played Bond (yes, even George Lazenby), but my favourite was, and still is, Roger Moore. His Bond was sophisticated, compassionate, quick-witted, and handy with all types of gadgetry and weaponry. When my parents finally bought a VCR in the late ’80s, we rented the latest Roger Moore 007 outing, A VIEW TO A KILL. Considered by many a Bond aficionado to be one of the worst films in the long-running film series, A VIEW TO A KILL has always been one of my favorite Bond films — critics be damned! 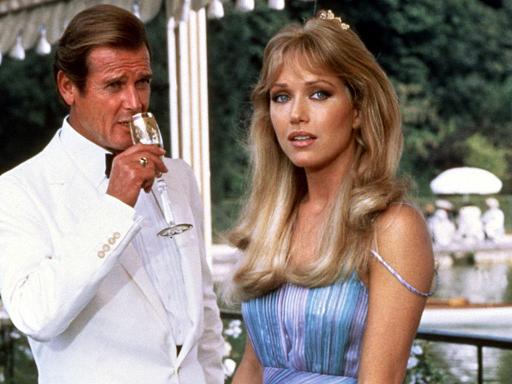 I’m not a fool — I know the film’s flaws: Roger Moore, at age 57 when filming A VIEW TO A KILL, was too old to play Bond. He had been hesitant to return for the previous entries, FOR YOUR EYES ONLY (a fantastic Bond outing that strips away the “spy-fi” silliness of previous films THE SPY WHO LOVED ME and MOONRAKER) and OCTOPUSSY, but producer Albert “Cubby” Broccoli kept plying him with cash and cigars. Prior to A VIEW TO A KILL’s release, Moore announced he was retiring from the role, “I mean, for the last three I was getting a little restless. But I had an absolute splendid time doing the Bond films. I played a lot of backgammon, managed to steal a lot of wardrobe, and got well paid. Nothing could beat it!” When watching Moore’s swansong, it’s obvious that the actor has taken great pains to create the illusion of a still-athletic secret agent: a facelift, skin tanning, and hair thickening were among 007’s arsenal in addition to his trusty Walther PPK. The stunt work and rear projection, long used for the Bond films, now look too obvious — in the opening pre-credit sequence in Siberia, Moore’s closeups are clearly shot on a soundstage. Roger Moore’s Bond wears a stylish black tracksuit for covert reconnaissance, but it’s laughable to think Bond can run and jump onto a closing drawbridge. Even romancing the Mannequin Known as Tanya Roberts was awkward, not just for the bad acting (she was nominated for her second Razzie Award after 1984’s SHEENA, courtesy of her cue-card-like delivery), but because of the nearly thirty-year difference in age. “The girls were getting younger and I was just getting too old,” Moore later reflected. Yes, it was time for him to retire — he had done all he could for Queen and country. 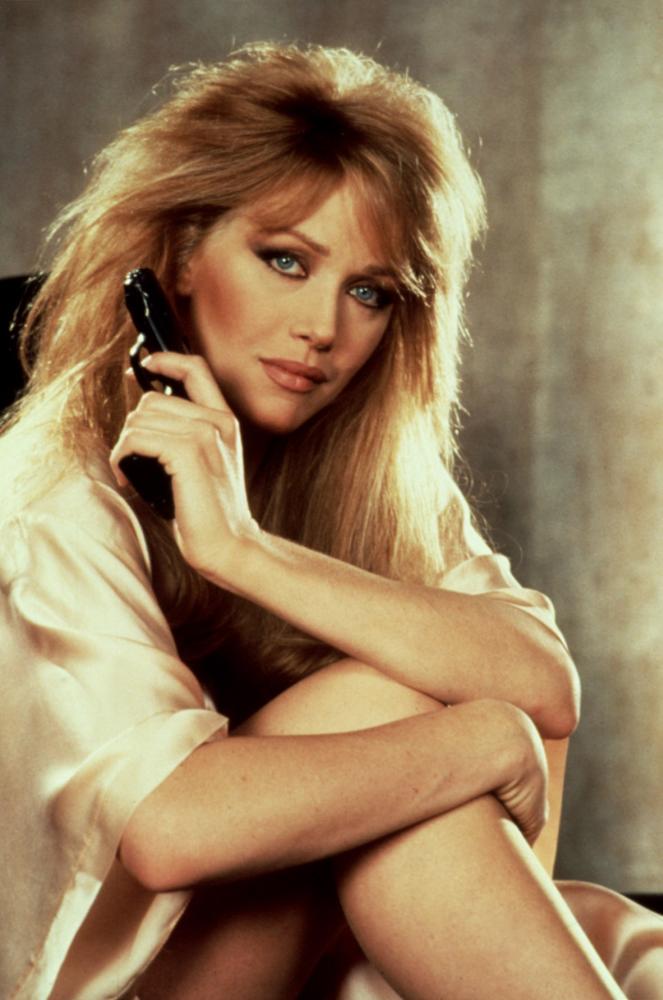 Despite its flaws, A VIEW TO A KILL is still a memorable Bond film. Duran Duran’s titular song, the best Bond theme to date (counter-arguments are welcome), accompanies the legendary Maurice Binder’s neon and black-lit title sequence of naked skiers and 007, but it’s the casting of two actors that make it a thrilling view-ing experience: Christopher Walken and Grace Jones. Walken, not the producers’ first choice (David Bowie had accepted the villain role and changed his mind quickly, according to various James Bond books), is electric in the film as homicidal industrialist Max Zorin. How does one play a villain, the product of Nazi eugenics, with obvious blonde hair and blue eyes, and a rogue KGB agent (with a cartoonish, monocle-wearing Nazi scientist as a surrogate daddy by his side)? Just watch Waken. His East German genetic madman is a mix of Lex Luthor and an ‘80s yuppie stockbroker (who happens to speak five languages, but who sounds very American—  “Not a trace of an accent,” Bond remarks in the film). How does he seek world domination? OPERATION MAINSTRIKE, a plot to blow up a lot of TNT on the San Andreas fault line to create an earthquake to submerge Silicon Valley underwater in order to have a monopoly on microchips! Diabolical indeed. It’s a ludicrous ploy, but boy does Walken sell it via his character’s “intuitive improvisation”, a fancy term for getting his Aryan rocks off by cold-blooded murder. Only an actor as committed to a role as Walken can deliver groan-inducing dialogue with aplomb: “What a view—” Grace Jones’ May Day begins, as they look out at the Golden Gate Bridge, “—To a Kill!” Walken’s Zorin finishes with an incredulous smile on his face, clearly anticipating mass murder with savage glee. He’s the type of villainous employer who wears a fashionably-‘80s double-breasted suit, with hard hat and safety glasses, while casually gunning down the dozens of loyal Zorin Industries employees (who haven’t yet drowned) with his trusty Uzi machine gun; he laughs as he sprays bullets into working-class flesh, the ultimate “screw you” signature of capitalism’s dark side. It’s thanks to Christopher Walken’s dedication to his craft that I can say, without hesitation, that Max Zorin is my favorite Bond villain. 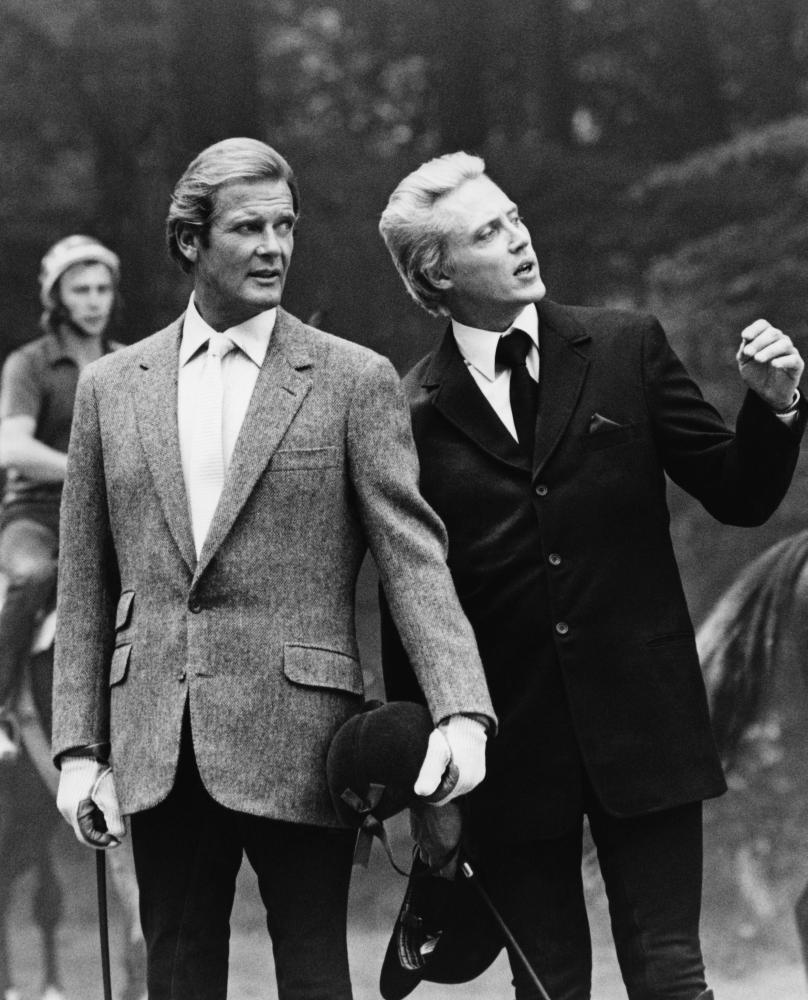 Grace Jones plays second fiddle to no one, but she is still the henchwoman to Christopher Walken’s Bond villain, so it is with regret that I praise her talents after already having done so for Walken’s Max Zorin. Before I saw A VIEW TO A KILL, my favorite “Bond Girl” was Diana Rigg’s Tracy Di Vicenzo (a.k.a. Mrs. James Bond, if only for a brief time in the world), but my adolescent self fell quickly for Ms Jones’ tall, angular, deadly May Day — she lifts a KGB agent over her head in defiance of Zorin’s Soviet handlers! As soon as Bond’s seduction attempt on May Day backfires, I was smitten instantly. Grace Jones is my queen, and her May Day is no mere “Bond Girl” or henchwoman, she’s one of the most confident (and best dressed) characters to appear in all Bond films (Including 1967’s ludicrous CASINO ROYALE and pointless THUNDERBALL remake, NEVER SAY NEVER AGAIN — “THEY’RE NOT OFFICIAL BOND FILMS!” Bond fans scream online from their dingy basements. Bond fans take their franchise as seriously as Daniel Craig’s iteration.). “She must take a lot of vitamins,” Q remarks upon Jones’ introduction as Zorin’s personal assistant/henchwoman/sparring partner/lover. It’s refreshing to see a fashion icon like Grace Jones portray a memorable villainous character—not since Richard Kiel’s towering Jaws has a villain shone onscreen. And like her metal-mouthed associate, May Day switches sides when it counts, assisting Bond in stopping Zorin — not an altruistic makeover perhaps, but she’s pissed off that her psychopathic boss/lover has drowned her team of assassins and left her to die in OPERATION MAINSTRIKE’s explosive conclusion. 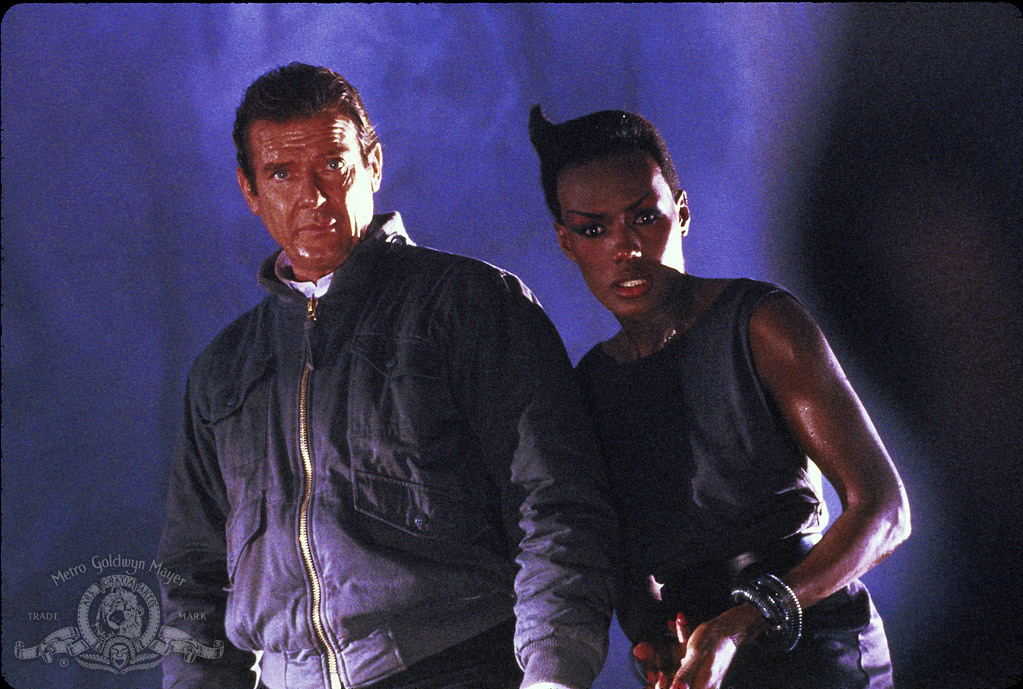 As an assassin, May Day enjoys her job, recounting to Zorin her termination of a cartoonish French detective (ethnic stereotypes aren’t the Bond films’ strength), death by abstract performance art! She’s the only Bond villain who looks both alluring and deadly in spandex and legwarmers — as Zorin encounters, she bites when she’s thrown down unceremoniously during a sparring session. She’s willing to bed Bond, flipping him to the bottom in a delicious act of dominance, for the sake of the mission (I see you’re a woman of few words,” Bond murmurs, still reeling that he’s been put in the submissive role. “What’s there to say?” she replies, kissing him aggressively.). Just as Bond uses his ballyhooed lovemaking skills in the service of Her Majesty, May Day sleeps with a wrinkly 007 to ensure the success of OPERATION MAINSTRIKE and put a mischievous “St. John Smythe” (one of Bond’s more ridiculous pseudonyms) in his place. The viewer might cry out when she emerges from the backseat of the Rolls Royce to kill Bond’s accomplice, Sir Godfrey Tibbett (a delightful performance by THE AVENGERS’ John Steed himself, Patrick Macnee) in a car wash, but as she kisses Zorin passionately later, believing Bond to have drowned in the same vehicle, all is forgiven — such is her homicidal joie de vivre. If you’re ever on an airship with May Day, don’t take her up on an offer of a drink! 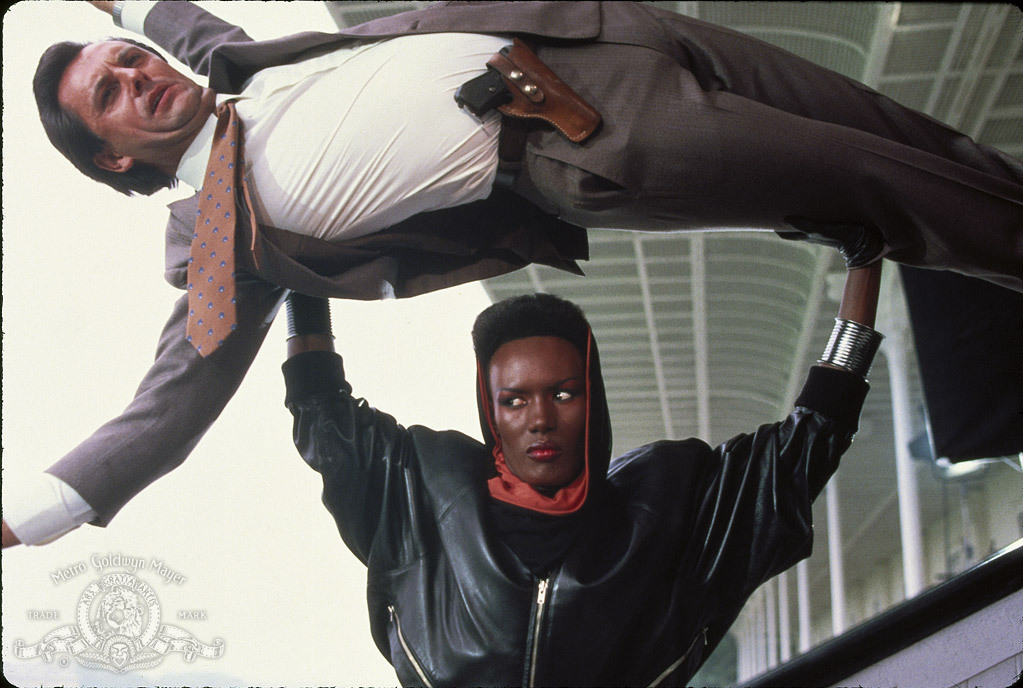 A VIEW TO A KILL may not be the best Bond film, but it will always have a special place in my heart. It is an enjoyable cinematic farewell to Roger Moore’s run as the world’s most famous spy; despite straying considerably from Ian Fleming’s novels and short stories, Moore’s Bond films were audience-friendly exhibits of outlandish plots, thrilling action, and irreverent humor and A VIEW TO A KILL is no different. 35 years later, the film is enjoyed by a new generation of Bond fans and I’m honored that I had a chance to see it on the big screen last year, thrilling to 007’s exploits and Grace Jones’ magnificence.